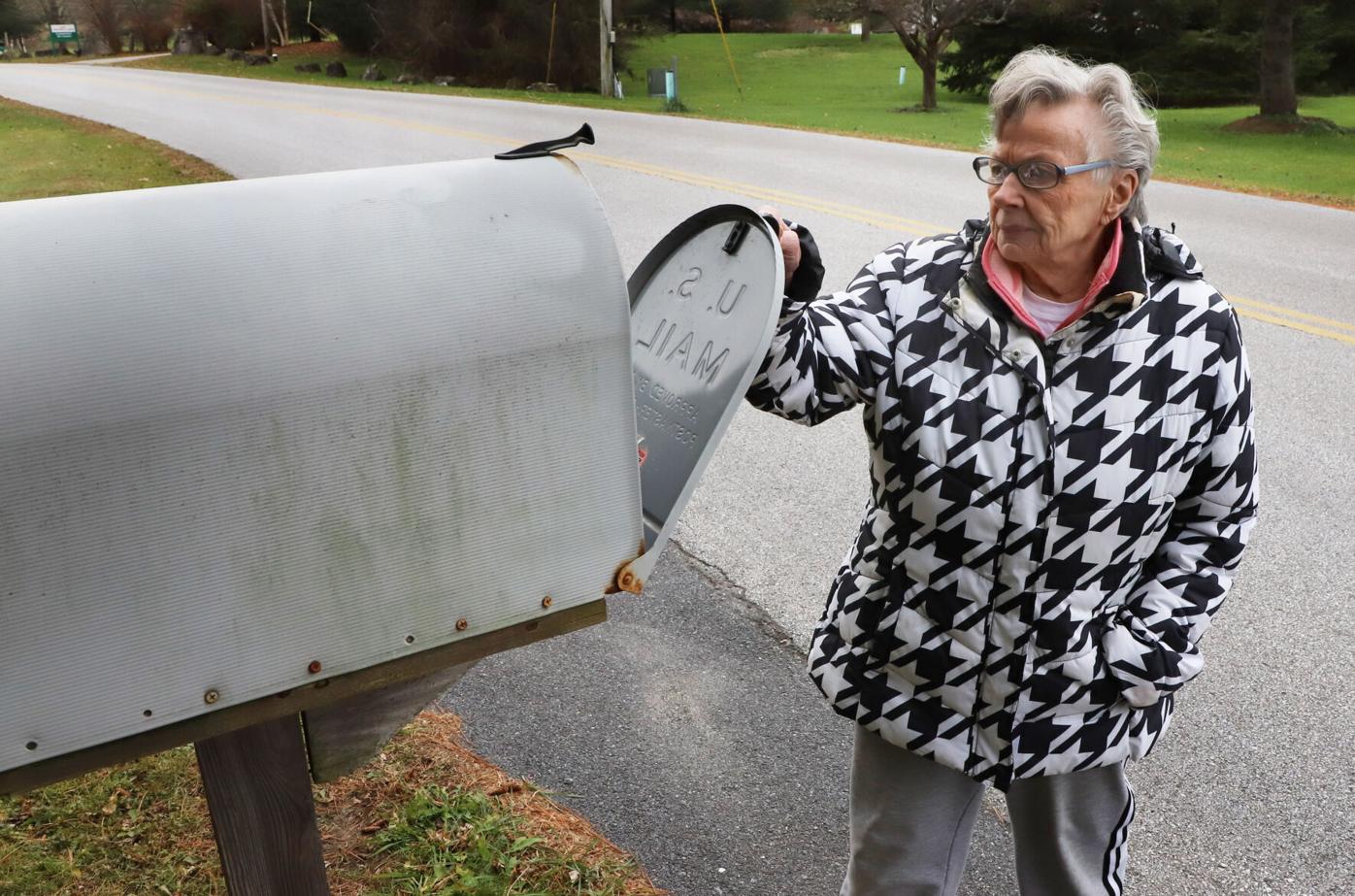 Rosemarie Jackowski, 84, stands in front of her empty mailbox at her Bennington home. "I haven't had a delivery in a week," she said. 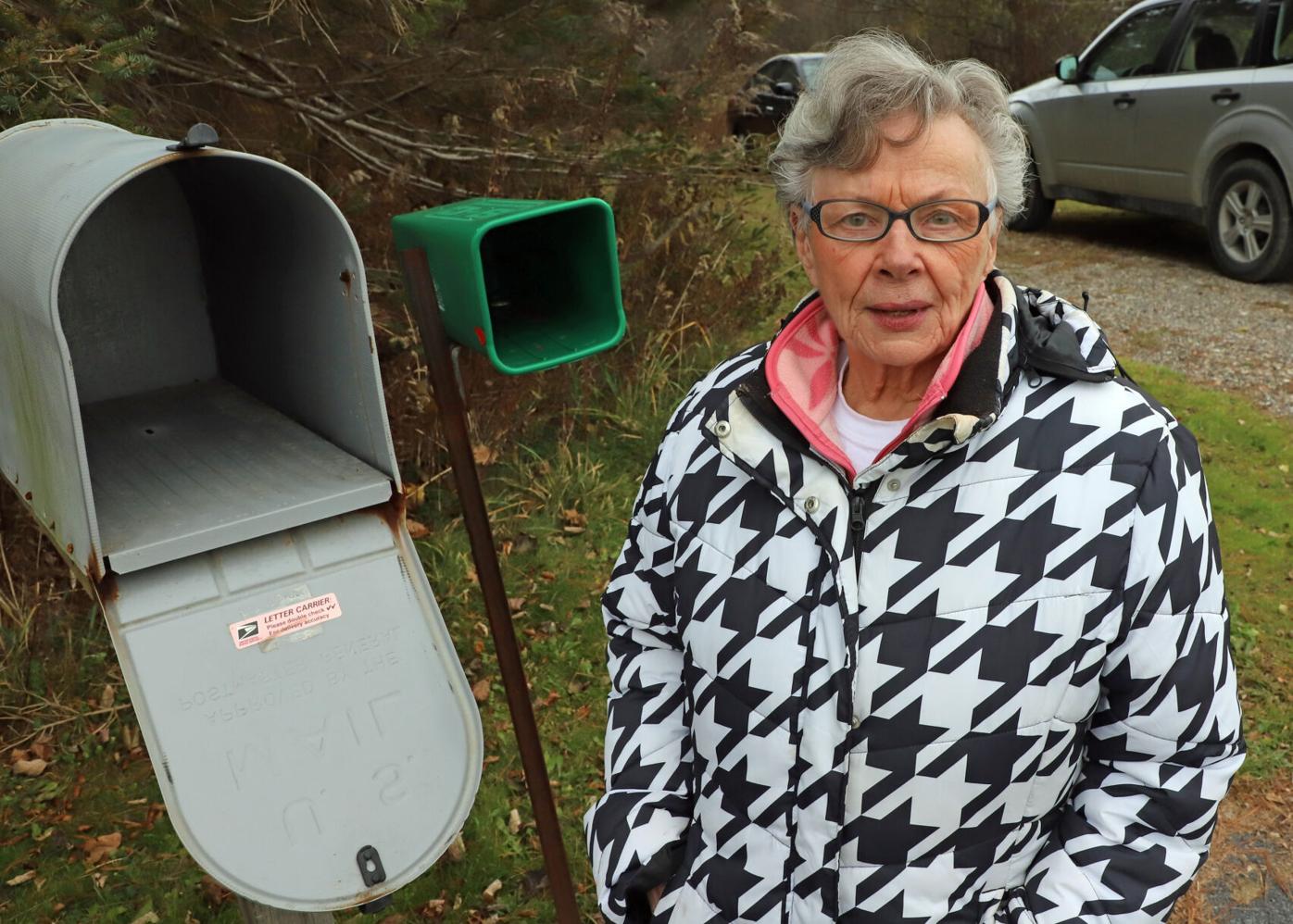 Rosemarie Jackowski stands in front of her empty mailbox at her Bennington home. “I’ve always assumed that my body will one day be found because somebody noticed that my mail hadn’t been picked up for a few days. Right now, there is no way for anyone to know,” Jackowski said. 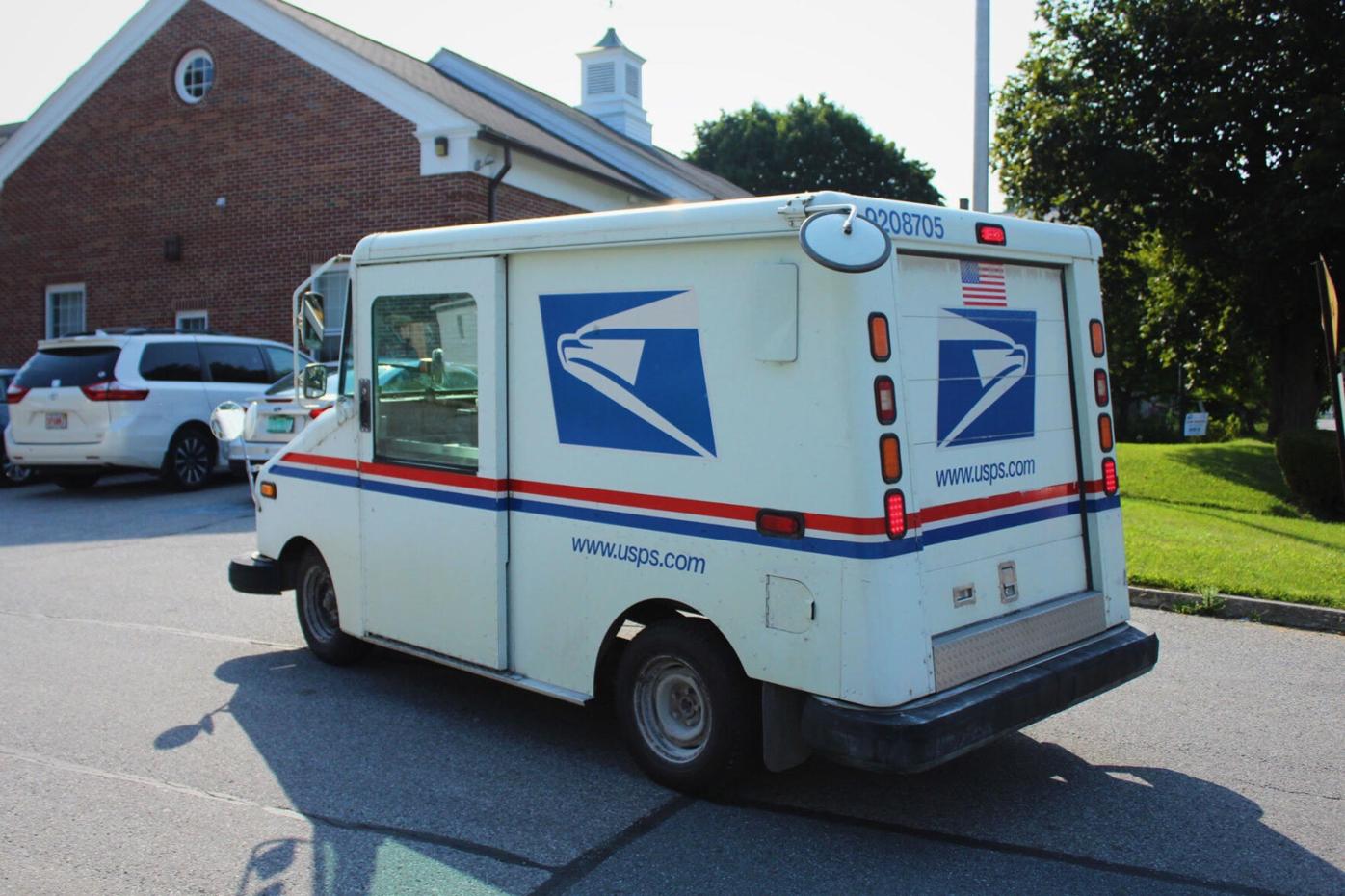 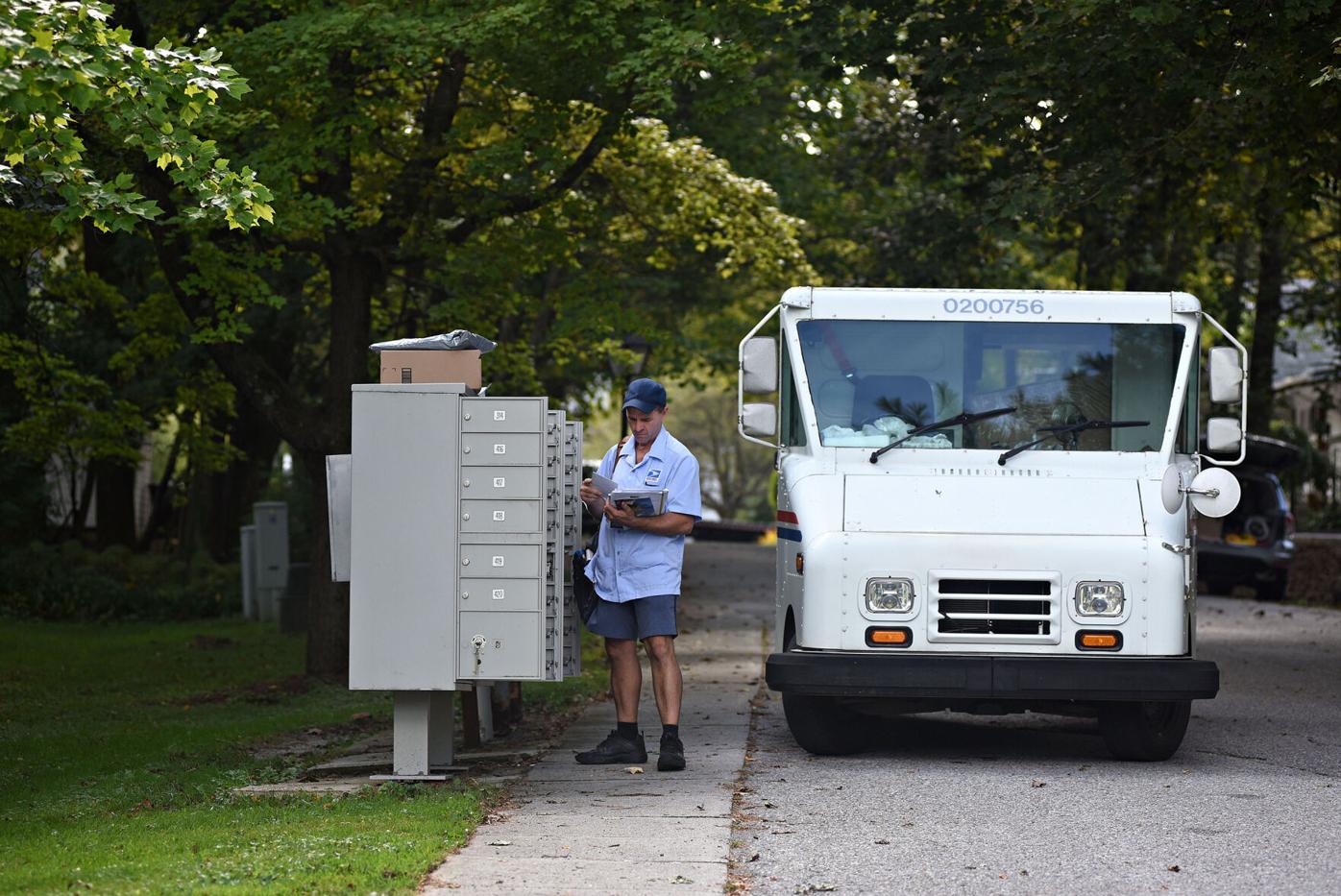 A mail carrier puts mail away at a development off of Elm Street in Bennington on Sept. 22.

Rosemarie Jackowski, 84, stands in front of her empty mailbox at her Bennington home. "I haven't had a delivery in a week," she said.

Rosemarie Jackowski stands in front of her empty mailbox at her Bennington home. “I’ve always assumed that my body will one day be found because somebody noticed that my mail hadn’t been picked up for a few days. Right now, there is no way for anyone to know,” Jackowski said.

A mail carrier puts mail away at a development off of Elm Street in Bennington on Sept. 22.

BENNINGTON — God forbid, should Rosemarie Jackowski perish alone in her Bennington home. How would anyone know she was gone, if not for the Postal Service?

“I’ve always assumed that my body will one day be found because somebody noticed that my mail hadn’t been picked up for a few days. Right now, there is no way for anyone to know,” Jackowski said.

She wonders, like so many other residents who’ve reached out to the Banner: What is happening with the Bennington Post Office and days without mail?

The service had been mostly pretty good for Jackowski, that was until the past 18 months or so. Mail usually came each morning, every day; but lately, it’s been coming much later, sometimes late in the afternoon or even after dark.

“I can see the road from my window, and I watch for the mail truck,” she said.

On Wednesday, Jackowski, 84, had been waiting a week for a delivery. “I haven’t had mail delivered since last Thursday. I’ve been keeping track by marking it on my calendar. I’m sure nothing came because I get the Banner, and it’s just not there.”

“I think of all the people who are my age who depend on the mail,” she said. “It’s our connection with everything. I know of a few people who get their medication through the mail. I guess they’re in a terrible situation.”

Jackowski’s main concern is that she never wants to be late paying a bill.

“Many times, there’s an additional charge for paying that way,” she said.

It’s left her feeling angry and frustrated lately. “We can put a person on the moon, but we can’t deliver an envelope. Is anybody addressing this?”

Jordan Brechenser, publisher of the Bennington Banner and parent company Vermont News & Media, said that when he announced in mid-September that the newspapers would move to mail delivery in October, he received “calls and complaints from readers that the Bennington Post Office was at best spotty when it comes to delivery.”

After months of planning for the change and discussions with postal officials, Vermont News & Media was assured that same-day delivery of newspapers could be accomplished, Brechenser said.

And for about a week, mail delivery seemed to work with few problems, he said. But then complaints — most from the Bennington area — began to come in on a regular basis.

On a recent day, Brechenser said, there were 32 calls from the Bennington area about delivery issues, with two from the Brattleboro area. This ratio is common lately, he said. The Reformer moved to Postal Service delivery at the same time as the Banner, he noted, and the communities are of similar size.

But in an email, USPS spokesman Stephen Doherty did not reply directly to questions about why the Bennington Post Office’s performance appears less efficient than its counterpart in Brattleboro.

Typically, the Postal Service is able to move employees to neighboring offices to cover short-term vacancies such as vacations, illness and military leave, Doherty said.

“While we are aggressively hosting job fairs and doubling our recruitment efforts, the current low unemployment rate in Vermont has made hiring replacement carriers a challenge,” Doherty said. “We continue to utilize all of the resources at our disposal, including overtime wherever necessary, to provide consistent, reliable service to our customers.”

Doherty said people interested in Postal Service jobs can visit usps.com/careers and search for available jobs in their area, or stop by the University Mall in South Burlington on Saturday to speak with the USPS hiring team. University Mall is 121 miles from the Bennington Four Corners, a drive of 2 hours and 45 minutes.

Vermont News & Media also deals with postal officials in New York state and in New Hampshire, Brechenser said, but most of the problems remain clustered in the Bennington area.

“People are furious about the Bennington mail problems,” Brechenser said, and some first realized the severity when their daily newspaper arrived days late. “So here we are, nearly four weeks into mail delivery, and besides small spurts of consistent delivery early on in Bennington County, most are getting spotty service at best. I have personally fielded dozens of calls and emails daily from concerned subscribers, and I don’t blame them in the least. When you pay for a product or service, you expect to get what you pay for regardless of the internal economics.”

He added that “there are people getting their paper every day,” but also pockets in the Bennington postal service area where delivery is intermittent.

Sean-Marie Oller, of Bennington, who said she’s tried to get answers on delivery issues and has reached out to state and federal lawmakers, wrote in a recent letter to area state representatives:

“I was in the Post Office on Saturday, and I was informed that mail had not been delivered since Tuesday, Nov. 9. I asked why, and the postal worker informed me that five people were out, and they had no carriers to deliver the mail. I asked if I could get my mail, and he went back and brought me my mail.”

It will cost extra for a box

Oller said she was later told she could rent a postal box and could pick up mail at the Post Office. The box would cost $60 for six months, plus a deposit.

“That is really frustrating to me,” Oller said in an email to the Banner.

It is not always convenient for people to come to the Post Office for their mail, she said, and the cost of a postal box could be a significant one for many people in town, making that option only for those who can afford it.

Oller added that she “thinks about the grief that the people in the office are getting” because of delivery problems, believing the fault actually lies with management — going on up to Postmaster General and Postal Service CEO Louis DeJoy.

As a response to the ongoing postal problems, Vermont News & Media is planning to offer some new delivery options for people in areas “where mail delivery is just not working,” he said.

Brechenser said he has had daily calls “with multiple levels of the Post Office, ranging from local officers in charge to postmaster, to regional directors and consumer affairs officers. These are all hard-working employees who ultimately want to get their jobs done, and get our papers delivered as agreed.”

“I, too, can fully appreciate these challenges, as do many other business owners across the country. But this can’t continue. The Post Office either needs to find a way to turn this around and get on a better delivery track, or we need to find other means to deliver the papers to our customers. It’s that simple.”

Brechenser said he hopes to receive word soon from the Post Office about “what plans they have to accommodate our agreement. I truly hope that they can make this work. I am working on plans in the event that the mail is not able to make good; all options are on the table.”

He said the VNM newspapers “have staff on standby to field calls and email, myself included, and have options to make re-deliveries in some areas throughout the day. We have our e-edition that is available daily at 5 a.m., and emailed newsletters with daily headlines and stories of interest, not to mention our website that is updated daily and regularly.”

Brechenser: 'We are all hands on deck to work and resolve this'

BENNINGTON — For Vermont News & Media newspapers, as well as for an increasing number of daily papers around the country — especially in r…