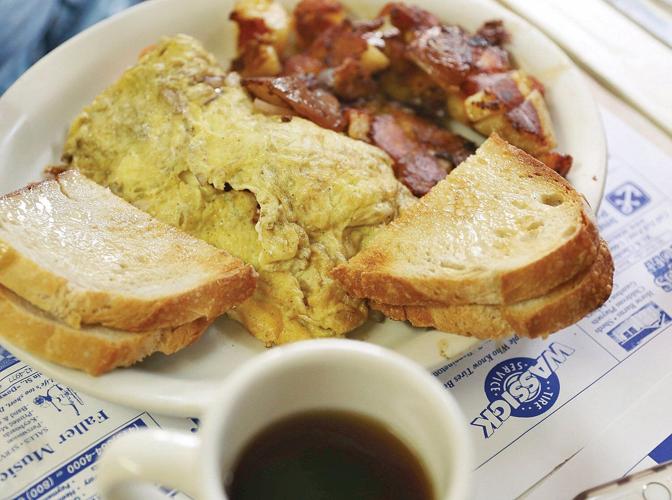 Breakfast at the Blue Benn: An omelette, home fries and toast. 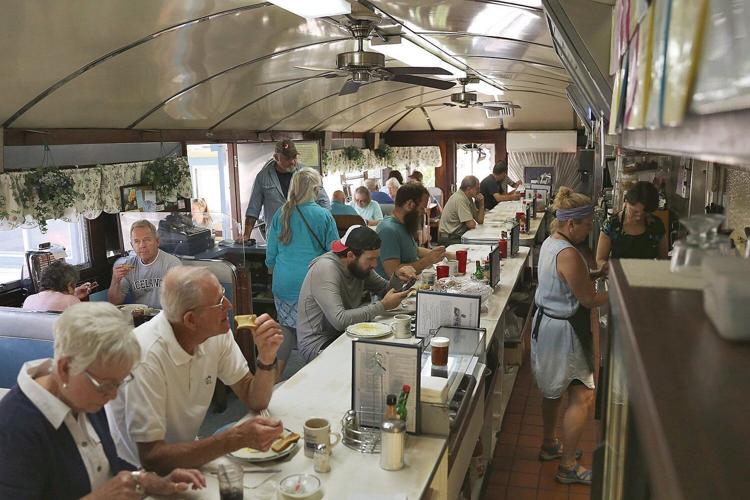 Restaurant goers enjoys breakfast at The Blue Benn on Tuesday morning in Bennington. 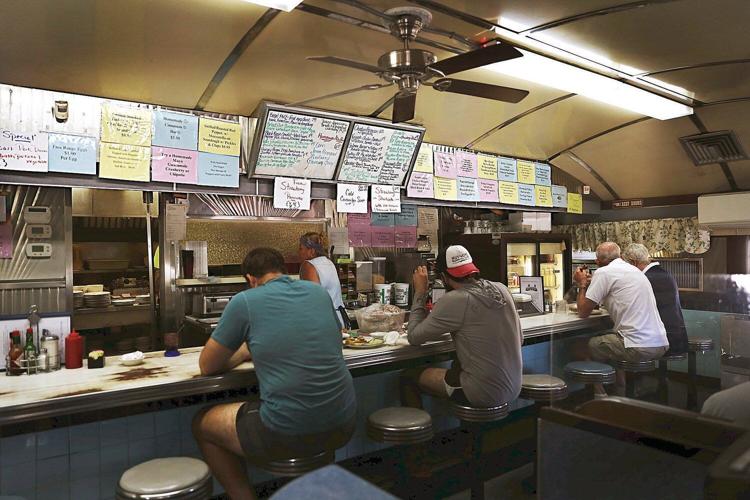 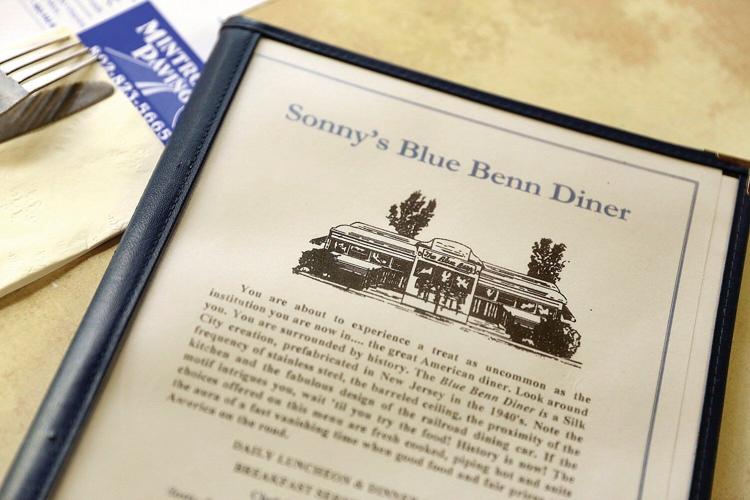 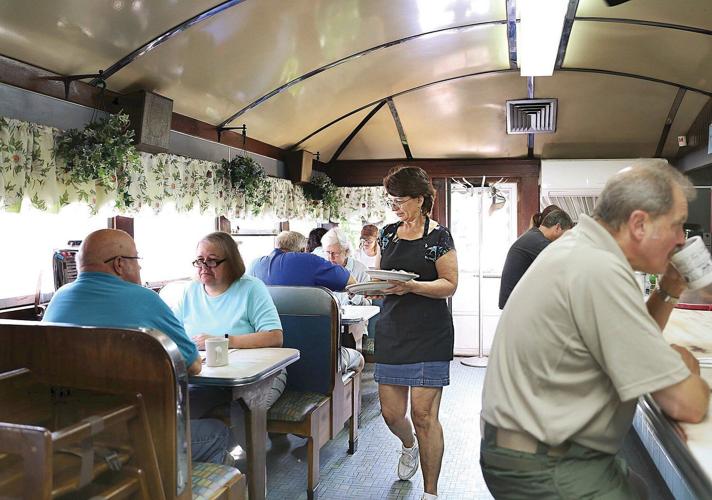 Veteran waitress Brenda Eggsware serves up some breakfast to customers at the Blue Benn on Tuesday morning in Bennington. 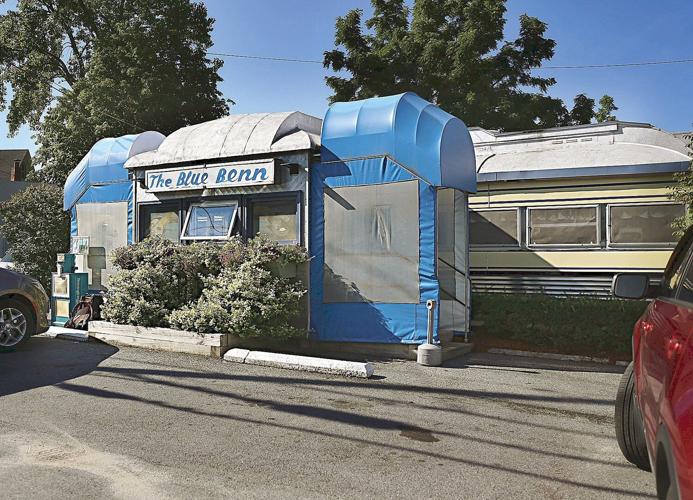 Breakfast at the Blue Benn: An omelette, home fries and toast.

Restaurant goers enjoys breakfast at The Blue Benn on Tuesday morning in Bennington.

Veteran waitress Brenda Eggsware serves up some breakfast to customers at the Blue Benn on Tuesday morning in Bennington.

BENNINGTON — Sonny's Blue Benn Diner comfortably sits 44 people — 20 on the stools at the counter and four at each of the six booths. When the diner is busy, as it is on most mornings in the summer, some parties will cram six into a booth and add a chair in the aisle. This boosts the capacity to 62 patrons.

"If we get slammed, we get a lot of people in here, with 20 more waiting for them to leave," said Lisa LaFlamme, the diner's manager and the daughter of its owners, Sonny and Marylou Monroe.

It was late on a Monday morning earlier this month, and while Sonny's remained crowded, two booths were free and a dozen stools were open. "You should have seen it an hour ago," the manager added. Her shift, which began seven hours earlier, would end in a few minutes.

LaFlamme began working at the diner when she was in high school, more than 30 years ago, which was about 15 years after her parents purchased the diner in late 1973. The Monroes bought the Silk City-model diner a quarter-century after it was manufactured in Paterson, N.J.

"Forty-eight-fifteen," LaFlamme said, reading the serial number off the builder's plate riveted above the front entrance. This is like the production decal inside the driver's door of an automobile. Sonny's Blue Benn Diner was the 15th Silk City Diner made in 1948 by the Paterson Vehicle Co., a firm defunct since 1964.

"That was a long time ago," LaFlamme said.

Sonny Monroe is no longer involved with the daily operations in the diner. He still exerts a heavy influence over the business and is the primary reason the diner's layout, fixtures and interior furnishings have not changed much from 1973.

After new menus were printed, last year, the many signs advertising specials were taken down. Some regulars were quick to communicate their displeasure.

Brian Carpenter, a cook at the diner since 1997, said the signs, on colored pieces of copier paper, served an important purpose.

"The signs started when Sonny used to go on vacation," Carpenter said. "He'd come back with a new special and couldn't put it on the menu, so he made up a piece of paper and put it up."

As a compromise, a few of the signs were reposted and all the specials were added to the latest version of the menu.

"I had someone say they were here in 1988 and they remembered I was getting married, and I had no clue who these people were," LaFlamme said, smiling and shaking her head. "But they remember those things."

LaFlamme works Monday, Tuesday and Friday mornings, arriving at 5 a.m. Over the last three decades, she has served many thousands of people. The average guest stays about 25 minutes, so most chats between servers and staff are short. There is not enough time to engage in a careful study of people.

Carpenter, from his position in the kitchen, has looked out and glimpsed familiar and famous faces inside the diner.

LaFlamme admitted that she has missed or forgotten some of the diner's notable visitors. She did remember Paltrow's visit, back in 2001, while the actress was in the area working on a film.

"Gwyneth was here when she was making 'Shallow Hal.' She had to put on weight, so she'd get deep-fried turkey sausage and stuff like that," LaFlamme said.

"Justin Long was in here two summers ago," Carpenter said about the actor known for "Live Free or Die Hard" and other works. "I can't think of all their names."

"Often, I don't recognize these people," LaFlamme said. "And, you know, it gets busy in here."

Sonny's Blue Benn Diner is open at 6 a.m. every day of the week but Sunday, when the door is unlocked at 7 a.m. The diner closes at 7 p.m. Thursday and Friday, 5 p.m. from Monday to Wednesday, and at 4 p.m. on weekends. With these hours, breakfast and lunch draw the most diners. The dinnertime crowd is different; patrons are fewer in number but tend to spend more time in their seats.

"If Brian and I had our way, we would be closed every day at 3," LaFlamme said. "But our boss is not allowing that just yet."

The manager and the cook would soon leave for the day, but return the following morning to do it all over again. Carpenter works in the kitchen seven days a week. He had been a cook in other restaurants, before he came here 22 years ago.

"It's different, because this is a diner," he said. "It's faster. You have to be faster."

Charles Erickson is a frequent contributor to Southern Vermont Landscapes.