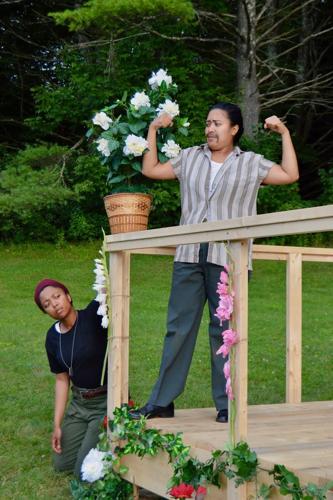 Nia Akilah Robinson as Benedick, and Paula Sim as Don Pedro, in "Much Ado About Nothing". Shakespeare in the Woods, 2019. 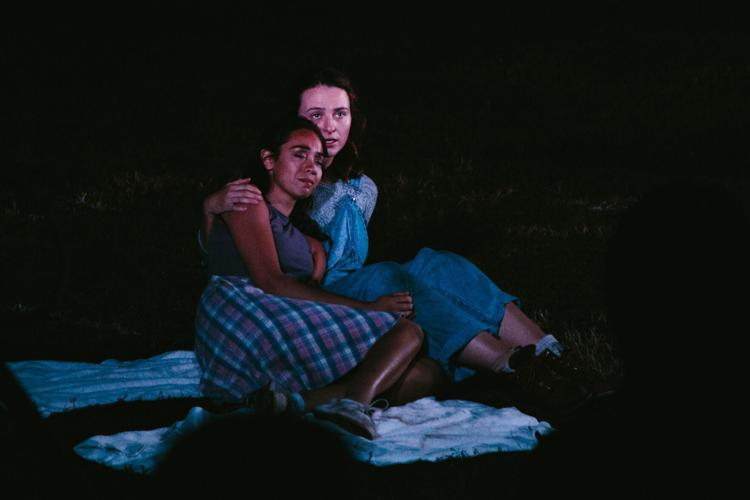 Zoe Abuyuan as Juliet and MaryKate Glenn as Romeo, in "Romeo and Juliet." Shakespeare in the Woods, 2019.

Nia Akilah Robinson as Benedick, and Paula Sim as Don Pedro, in "Much Ado About Nothing". Shakespeare in the Woods, 2019.

Zoe Abuyuan as Juliet and MaryKate Glenn as Romeo, in "Romeo and Juliet." Shakespeare in the Woods, 2019.

MANCHESTER — It was going to take more than a worldwide pandemic to keep Pawlet native Katharine Maness from resurrecting Southern Vermont’s one and only Shakespeare festival, inaugurated in 2019, shut down the next year — but that Maness swore wouldn’t die.

And so the New York-based actor will see the oath through with the return of another three-show season for Shakespeare in the Woods, this one featuring some of the Bard’s greatest plays on war, with a contemporary spin.

“Being a queer Jewish person myself, in my endless love for Shakespeare, there is a very acute awareness that these are 400-plus-year-old words written by a cis, presumed straight, white man,” Maness said. “A big part of [our] unconventionality is how we approach casting, creating a space for identities that haven’t traditionally been afforded chances to play many of these incredible roles.”

Maness added that if Shakespeare in the Woods is able to bring audiences in to see these perspectives, “perhaps new ones not considered by them previously, that stir conversation and thought, then I consider that a success.”

In their own words: Directors speak

In creating the season slate, Maness also had to consider who would lead the development of each play. As such, Maness urged each of the three directors to summarize their visions for the classic works put in their charge:

Dinkova: As an immigrant artist in the United States, I always aspire to bring a global perspective to local issues, to examine urgent societal concerns with empathy, humor and a healthy dose of critical distance.

I wanted to direct “Coriolanus” because it’s about the wounds we carry — as individuals, communities, cultures — and about the painful process of healing. It’s about war, not only between nations, but between the wealthy and the poor, between femininity and masculinity, nationalism and globalism.

When you immerse yourself in the play, you can’t help but find echoes of the Occupy movement, the Jan. 6 riots, the climate crisis, the war between Russia and Ukraine. It feels like a play written yesterday to ensure we get a tomorrow. It’s a warning tale to overleap the artificial borders we create between identities, people, nations.

Notably, the original invests the only women in the play — Coriolanus’s wife and mother — with enormous responsibility to right the wrongs of a toxic empire. I decided to set it in the present day at a U.S. refugee detention center, where the survivors of armed conflict between warring states seek asylum from the devastation of their homes. Cast with a predominantly female and nonbinary ensemble, this is a story about the people left behind, the wives, mothers, relatives, citizens, wrestling with the legacy of the men of state who made terrible mistakes, to figure out how not to repeat them.

This production assumes the point of view of Coriolanus’s wife Virgilia, now an asylum seeker herself, who recounts the history of her country’s devastation to pierce through the cold indifference of an asylum officer and begin to manifest healing, for herself and her community.

Lerner: “A Midsummer Night’s Dream” has been an integral part of my love and fascination with Shakespeare from the beginning. It was the first Shakespeare play I can remember seeing in full, and the language was so intelligible and the acting so razor sharp. I left the theater almost convinced I had been deceived. Was that really Shakespeare? I understood it all!

From [then] I knew it was possible to present Shakespeare in a way that didn’t alienate. There is a place for everyone in the audience and onstage. With this production, I attempted to exemplify that lesson.

When revisiting the piece two-plus years into a pandemic, I found that it would be the perfect “quarantine stream” of sorts. It’s a romantic comedy, horror and fantasy all rolled in one. A true crowd-pleaser, with elements that appeal to everyone. Taking this idea one step further, it would be the story to tell if you were with a group of people with very little access to modern forms of entertainment.

This is just what the characters choose to do. A group of people on a camping trip find themselves in conflict, apathetic and looking to turn the night around. Without many other opportunities, they look to what they can provide for themselves. Each of them dons a character (or two) to collectively and improvisationally create the story. Through playing this game with one another, fences are mended, lessons are learned, and a childlike spirit is found.

However, not all changes that simply, and although storytelling is cathartic and transformative it can’t do the work on its own. Art is a powerful tool but it must be used in conjunction with other strategies to effect real change.

Paley: I was attracted to “Titus Andronicus” because it seemed like “Romeo and Juliet” without the star-crossed lovers. I wondered, what could people possibly be murdering each other over, if not true love?

Titus is famous for its violence. As a pacifist, I have a curiosity about why humans intentionally hurt one another. As a transgender individual, I can’t help but examine the ways in which the roles of masculinity and the patriarchy condition behavior.

Our play is devised in such a way that it’s told by a group of individuals who are mourning the loss of a loved one, a victim of abuse. Revenge is no longer between families or nations, but between everyone who allows the abuser to abuse, and the rest of us. Between those for whom abuse is not an issue, and those who survive, and those who help others to survive.

[We try] to figure out how to work through a desire for revenge in a world where marginalized folks pay more in the eyes of the law. We explore individual trauma and collective healing. “Titus Andronicus” is a revenge tragedy. We’ll mine the ashes for traces of hope, and they’ll [likely] be found in flecks of community and a drops of love.