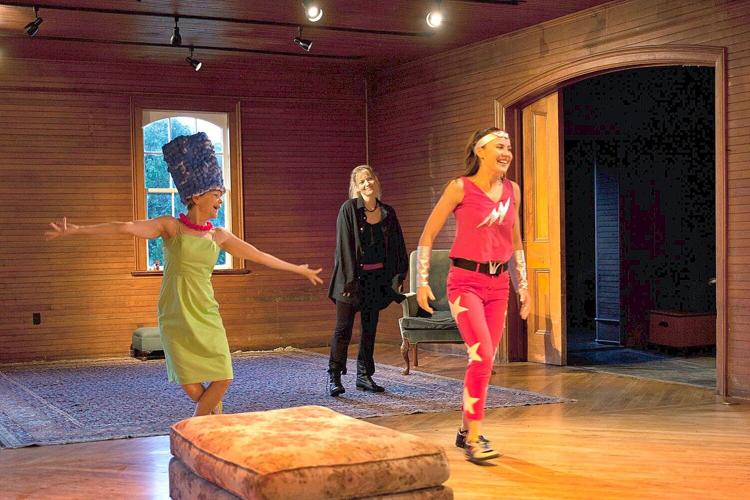 NORTH BENNINGTON - When you attend a play at Living Room Theatre, the one thing that always jumps out at you is the visceral intimacy of the action in the Park-McCullough Historic Carriage Barn.

It accentuates everything happening on stage. Perhaps more than any other regional venue for professional acting, including Hubbard Hall's second stage, it puts the actors, literally, in your face.

This alone is reason enough to spend the very modest (and voluntary) ticket price to take in LRT's big summer production, the U.S premiere of Irish playwright Lucy Caldwell's adaptation of "Three Sisters," by Anton Chekhov, and directed by Christopher McCann.

Caldwell's version takes the Chekov tale of tumultuous Russia in the early 1900s and moves it to 1990s Belfast, in the conflicts and ceasefires during the Troubles, as the period is known, when the British military occupied Northern Ireland.

Three sisters, Orla (Monique Vukovic), Marianne (Hannah Beck) and Erin (Oona Roche), dream of escaping their tedious suburban lives for a fresh start in America. It's Erin's 18th birthday and, as the sun shines and guests assemble, everything for a fleeting moment feels possible.

It's a crowded place with Marianne's husband DJ Cool (Oliver Wadsworth) and the girls' sauced-up Uncle Beattie (Kirk Jackson) coming in and out of family angst. The opportunistic and peripatetic family friend Vershinin (Allen McCullough) also enters, with his family in the shadows, to complicate matters.

To add another twist, Chinese immigrants flood into Ireland at this time as Hong Kong is about to be handed over from British rule to China. Here the sisters' brother Andy (Jay Reum) introduces his betrothed Sui Jen (Xingron Chen).

If that crowd isn't enough, populate that crowded thoroughfare with the rest of the characters, and you have subplots galore: Baron (Mike Broadhurst), Simon (Kario Marcel), Teddy (Chase McCloud), and Rod (Matt Dallal), the latter who guides the audience to sit in new locations in the Barn during act changes — one of the show's lovely elements.

In the middle of this maelstrom, people still live their daily lives during political upheaval and dream and hope and get through the day as best they can. Caldwell thus moves us through three time periods: 1993, 1995, and 1998.

Director McCann and producer and artistic director Randolyn Zinn did yeoman's work getting such a big production together in the relatively short rehearsal cycle for which LRT is known. They took what is a classically gritty Russian vibe and brought it to more modern times, demonstrating, as Jackson's Uncle Beattie is quick to tell us, the more things change in the human condition, the more they stay the same.

The acting in this play is superb top to bottom, and I would be remiss if I didn't single out the sisters themselves. Vukovic, Beck and Roche absolutely grasped the cross-generational dynamics at play in Caldwell's version, taking the very different but also powerful female leads, and making them planets about which the rest of the cast beautifully orbited.

Sound and lights by Chase McCloud excelled in their resonance and timing, and Zinn's costumes - with help from Sarabell Wrigley - provided both practical and surreal appeal. Finally, Wadsworth's dialect coaching was first class - some of the best accents on these actors I've witnessed anywhere, with a nod to Beck and Dallal in that department.

There is so much to this play, and discerning audience members will need a bit of time at the start to digest all of the characters entering the scene of Erin's birthday party. Once oriented though, Caldwell's tapestry welcomes and drapes you.

As do the logistics of LRT's venue, the Barn. In one scene, the commanding McCullough gently bumped into me as he gestured with lan. In another, the smoldering Beck was warming up to a tryst just inches from my seat, and goosebumps perhaps betrayed my own human weakness - but more likely showed how her sublime acting and that cozy venue were a perfect match.

This is what theater should be like: close, personal, emotional, and unapologetically human. LRT does Russian plays better than any regional venue, and they took Caldwell's U.S. premiere, embraced it, and put it right in our laps.

As such, if you don't jump from your seat in applause at the final curtain, please check your pulse, and anything else you deem critical in making you human.

"Three Sisters" will run through Aug. 18 at Living Room Theatre, Park-McCullough Historic Carriage Barn, 1 Park St., North Bennington. Info and tickets: 802-442-5322 or lrtvt.org. Ticket reservations recommended, and can be made via phone or online.