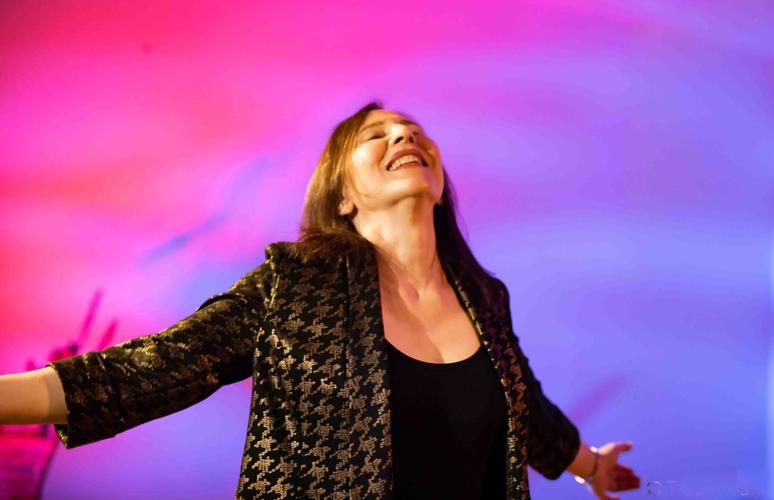 Jazz singer Kendra Shank will perform in a benefit for Groundworks Collaborative at the Latchis Theatre Saturday night. 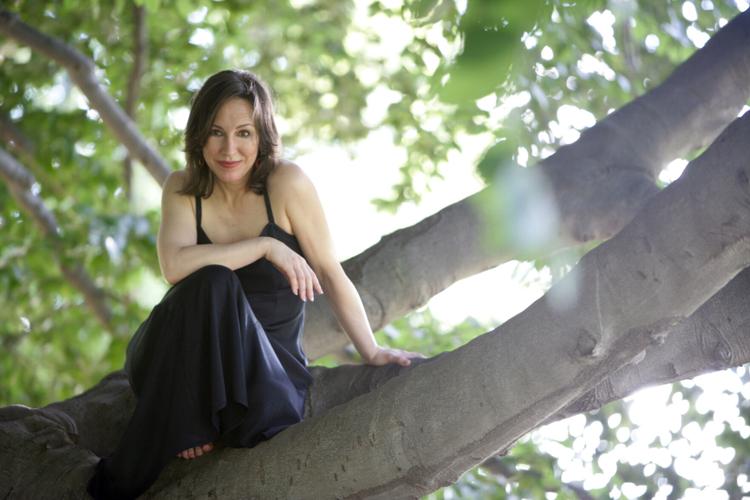 "I've just been very fortunate," Kendra Shank said. "I had a lot of very amazing singers reach out to me and be encouraging and help me in various ways." 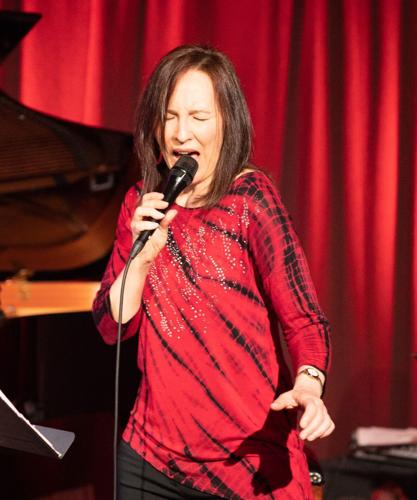 Kendra Shank describes what happens with her band onstage as a "musical conversation." "I like to work collaboratively so that everyone is expressing themselves. I call it the alchemy of collaboration," she said.

Jazz singer Kendra Shank will perform in a benefit for Groundworks Collaborative at the Latchis Theatre Saturday night.

"I've just been very fortunate," Kendra Shank said. "I had a lot of very amazing singers reach out to me and be encouraging and help me in various ways."

Kendra Shank describes what happens with her band onstage as a "musical conversation." "I like to work collaboratively so that everyone is expressing themselves. I call it the alchemy of collaboration," she said.

BRATTLEBORO — Jazz singer Kendra Shank had a career in folk and country music when a friend played her a Billie Holiday record.

“And I just flipped over it,” she said. “You know, it was like this light bulb moment of: That’s what I wanted to do.”

Some time passed before her career made the transition, and in that time, she met her first jazz teacher and mentor, Jay Clayton — known to Southern Vermonters, Shank noted, for her teaching at the Vermont Jazz Center in Brattleboro. At that time, in 1989, Shank and her mentor were both living in Seattle, Wash., and Clayton was teaching at Cornish College of the Arts.

“Through a friend, I met Jay, and I heard her sing and I was bowled over,” Shank said. “So that got me started listening to jazz and it was still a little while before I actually made the transition.”

Though she already had her bachelor’s degree in art and French, she studied with Clayton as a non-matriculated student. “I sang with her over the years. She was a mentor and encouraged me and taught me a lot, and was one of my greatest influences.”

From there, she met Shirley Horn, whom she credits with her first record deal, co-producing that album and launching her at the Village Vanguard in New York, and then Abbey Lincoln, another mentor, influence and collaborator (Shank played guitar on one of Lincoln’s albums).

“I’ve just been very fortunate,” Shank said. “I had a lot of very amazing singers reach out to me and be encouraging and help me in various ways.”

Shank, of New York City, will bring all of this influence — and gratitude — to the Latchis Theatre at 7:30 p.m. Saturday at a Circle of Love benefit concert for Groundworks Collaborative, which provides services to address housing needs and food insecurity in the greater Brattleboro area.

Joining Shank will be guitarist Draa Hobbs, Michael Zsoldos on tenor sax, Berklee School of Music faculty member Rich Greenblatt on vibes, Steve Bulmer on bass and Tim Gilmore on drums. Shank said she came to this opportunity at the Latchis from Hobbs, a friend.

“And then when he told me that it was going to be a benefit for Groundworks, I was really pleased, because this is a cause that I feel very deeply about,” she said. “I’m really glad and honored to be able to contribute to this benefit.”

Shank recently took the time to talk with Vermont News & Media about collaboration in jazz music, “scat” singing — or not — and how audiences can expect to be surprised.

Q: You sound grateful to the people who have helped you in your career.

A: I am. I’m very grateful. I feel like it’s important to remember where you came from, and all the people that have helped you along the way. I’m at a time in my life now where I find myself looking back a little bit, seeing where I’ve been and taking stock. I’ve always been very, you know, living in the present moment, and pretty much focusing forward on where I’m going. And all of a sudden, I’m looking back and just remembering that — maybe that’s why I sound especially grateful, because I’ve been remembering the people that have influenced me, that have helped me.

As you develop as an artist and you hopefully find your own voice, I find that as I look at it, your own voice is you: your particular unique spirit and self — but coming out of a synthesis of all those great people that you’ve listened to or that you’ve been influenced by. And it’s not just singers. There are instrumentalists that have greatly influenced me and affected my music and the people that I play with.

I’m a very interactive singer. I don’t view myself as, you know, the diva singer who’s in front of the band, and they’re just there to serve her and accompany her. I look at it as playing music with the band. So even though I’m singing songs, and I’m singing lyrics, I have a musician’s viewpoint. I like to work collaboratively so that everyone is expressing themselves. I call it the alchemy of collaboration.

So, this is jazz. I think I’m describing what I think jazz is really all about. We’re creating music as a group. Everyone’s listening to each other, everyone is affected by each other. What I sing is going to affect what the drummer plays and what the pianist plays is going to affect what I sing. I’m going to hear a harmony or a chord from the pianist that inspires me to make a certain note choice that I might not have made otherwise. It’ll inspire something in my ear. Then I’ll hear something he played and I’ll be responding to it. It’s a conversation. It’s a musical conversation. To me, that is the whole point. That is the beauty of it.

Q: You kind of walked into my next question, which is: My understanding is that improvisation is one of the key elements of jazz. How does that work?

A: One thing I’ll say is, because I agree with you that improvisation is a key element of jazz. But I would like to clarify that in my view, that doesn’t necessarily mean you have to be a scat singer to be a jazz singer. As it happens, I do improvise without words. I don’t really call what I do scat singing just because I sort of associate that word with more of a classic, Ella Fitzgerald, with a certain kind of approach and syllables and so on. But you could call it scat.

A: Scat singing is what people refer to when a singer is improvising over the chord changes of the song without using words, like a saxophone player. So she’s doing with the voice what the saxophone player would do, without words, and it’s like, you know (starts singing wordless syllables into the phone). That’s scat singing.

I use my own personal syllables, or just, (sings own wordless syllables into phone). So it’s not that classic scat. But it’s still scat. We don’t have to split hairs here. (laughs)

But my point that I started to make was that, in my view, what defines a singer as a jazz singer isn’t necessarily scat. She doesn’t have to be a scat singer to be a jazz singer. One example of that would be Billie Holiday, who didn’t scat sing. But I consider her a great improviser because of how she approaches a song in her phrasing, and in her note choices, and in her reimagining of the melody — she’s definitely improvising.

Q: What can the audience at the Latchis expect to hear?

A: I’ve been really attracted to songs that have to do with celebration of life, or love as a healer, the healing power of love, the power of the human spirit, our resiliency, things about world peace and just philosophical messages that are sort of positive for life.

Not that it’s all — I don’t want to sound all New Agey or anything, like it’s going to be some kind of weird cult evening or something. (laughs) I’m attracted to songs with messages that tell stories that I can relate to and that help me live better. Music is such a healing thing.

Some people don’t realize that Abbey Lincoln was a tremendous songwriter. She’s one of the great songwriters, I think, that we have, and so I’ll be doing a couple of her songs. One of them is the title for the benefit. “Circle of Love” is an Abbey Lincoln song.

Abbey was an important mentor. She’s gone now. She passed away several years ago, about a decade ago, but she was a dear, dear friend and a mentor and a big influence.

We’re also going to do a song that has become kind of my hit song, if you will — I don’t like to say that, “hit songs.” It’s become one of my audience’s favorite songs. I take an old British folk song called “Black is the Color of My True Love’s Hair.”

It’s very much transformed. I first learned that song when I was a folk singer-guitarist, and I learned it from a Joan Baez songbook. And I sang it just in its traditional way, but now I’ve completely changed it around. So those who come to hear it, will hear that.

When I do an arrangement for a song, it’s deliberately kept quite open, so that it leaves room for a lot of collaboration-improvisation from the band, so that everyone can just bring their own fresh, unique voices to it. “Black is the Color” is an example of that, because the arrangement just revolves around this bass ostinato. An ostinato is just a repeating melody line. In this case, it’s that bass line (sings sample) — that’s the ostinato, and so everything just revolves around that. It’s very open. It’s harmonically modal, so that means it’s open and anything can happen.

What: Circle of Love, a benefit concert for Groundworks Collaborative.