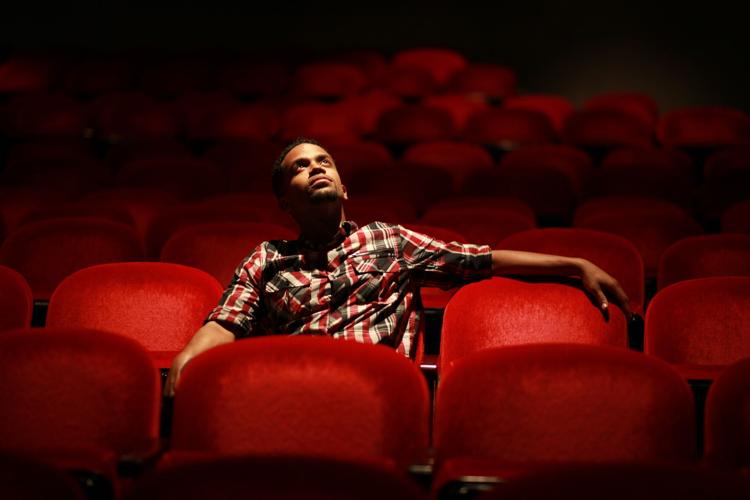 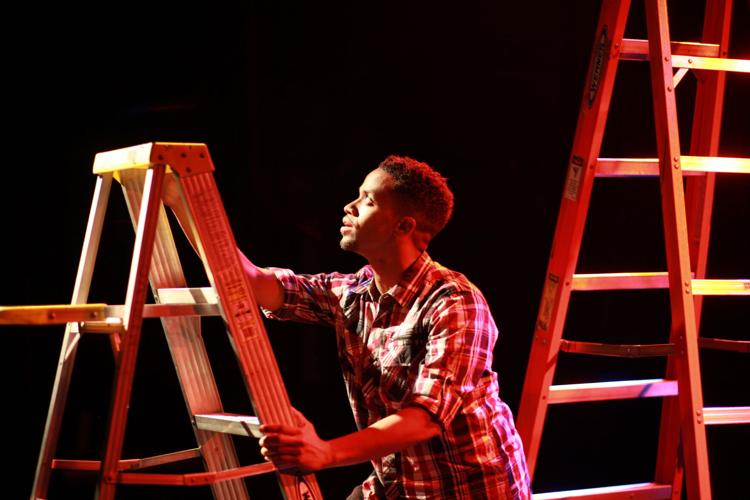 PUTNEY — In the trailer for his play “Spiritrials,” Dahlak Brathwaite paces a dimly lit stage and tells an audience of being caught with “four stems of mushrooms.”

“My state’s solution was for me to find a God of my own understanding,” he says, referring to a component of a court-ordered 12-step program.

His voice drops, and he adds, “That’s what I was trying to do with the mushrooms. No?” The audience laughs. The vibe is reminiscent of a TED Talk.

This is one facet of the one-actor show written and performed by Brathwaite. “Spiritrials” was inspired by his experience in the criminal justice system as a young Black man, having been caught with the mushrooms a few weeks after graduating from college.

“Spiritrials” is presented by Next Stage Arts and Sandglass Theater as part of Sandglass Theater’s Voices of Community series. The play comes to Next Stage, 15 Kimball Hill, Friday and Saturday at 7 p.m. Tickets are $25, with a 50 percent discount for BIPOC audience members. There will be a post-show discussion led by the Root Social Justice Center of Brattleboro.

According to the Sandglass Theater website, the Voices of Community series presents performers from around the country who use art as a means for social change and inspiring dialogue. Topics include housing security, racial equity, gender identity and disability, according to a program description.

“By bringing an artist into our community, it also opens the door for us to become closer as a community, and build further relationships,” said Shoshana Bass, co-artistic director at Sandglass Theater. These include relationships among local organizations, as well as among audience members.

Brathwaite is a writer, actor, musician and vegetarian, among other things. On his website, he describes himself as a multifaceted hip-hop artist. “Spiritrials” draws upon his talents as a storyteller, poet, musician and public speaker.

Narrated in verse, the story is told through monologues of five different characters, all played by Brathwaite. These characters, he said, comprise the most fictional part of the piece.

“Although based on people in my memory, they’re really created and formulated as just different representations of myself and the way that I saw myself and some of the people that I met in that program,” said Brathwaite, 36, of New York City, speaking by phone from Denver, Colo. “Spiritrials” is currently on tour.

The show contains a soundtrack of what Brathwaite describes as a “hip-hop aesthetic,” with the music performed by Dion Decibels — the stage name of Dion Reiner-Guzman — and Brathwaite.

Brathwaite said he created the play between 2010 and 2015, when it premiered in San Francisco. This period included the creation of the soundtrack, also called “Spiritrials,” which he released as a full album before the play’s premiere.

The play explores the relationship between church and state, and specifically, the church and the court. As a child, Brathwaite was introduced to religion through Catholicism, but said he does not adhere to any strict set of beliefs.

“I was looking for a title that could encompass it all, thematically and aesthetically, and one of the things I settled on, of course, was ‘Spiritrials,’” he said.

Brathwaite noted that the title can be interpreted many different ways. In a literal sense, it can describe one’s spirit going through a trial or tribulation. In another sense, the word “trial” can mean to try or sample, the way Brathwaite sampled religious music for the piece. One theme he explores, he said, is the relationship between Black music — much of which is related to the church — and Black subjugation.

Another literal meaning could refer to the high stakes faced by Brathwaite and others under a court order to find God.