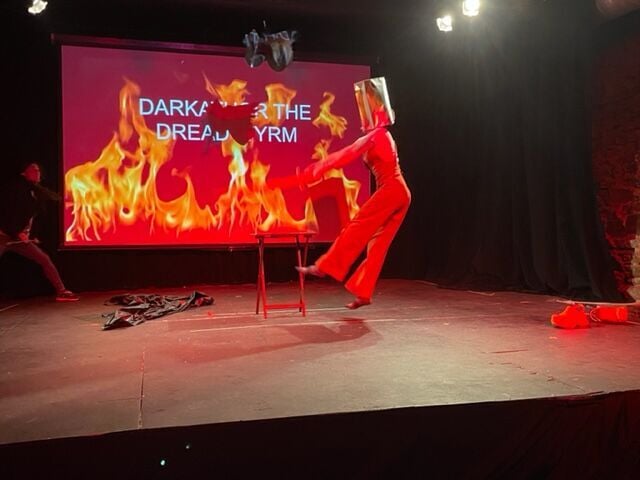 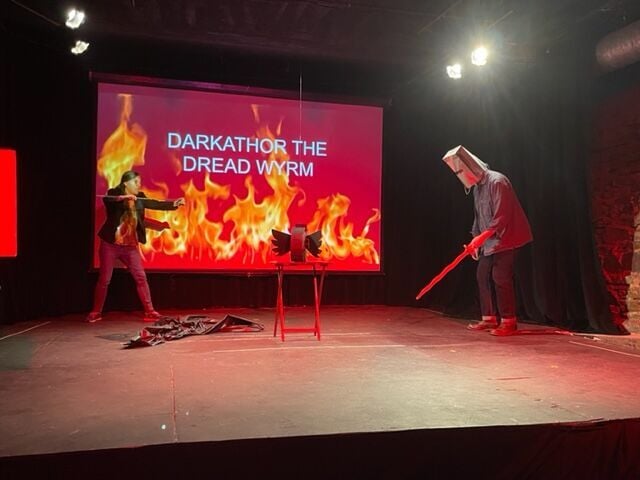 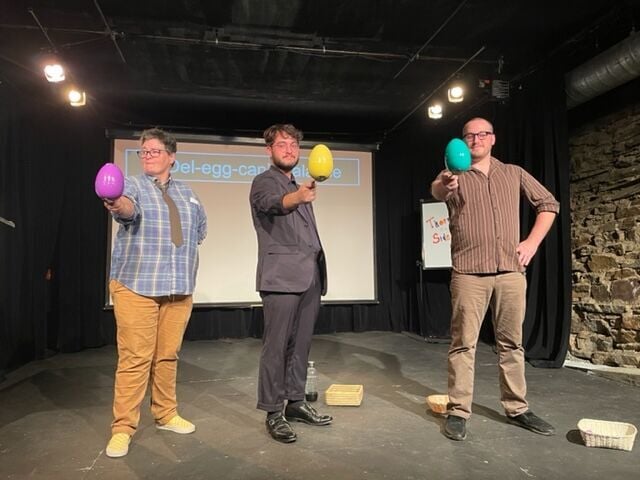 BRATTLEBORO — During the period of time in which Shannon Ward refers to as “the deep pandemic,” she and some friends would play “Jeopardy” together on Zoom. They started getting creative, writing their own clues.

“It got kind of silly and abstract,” Ward said.

She proposed the idea of bringing the game to the Hooker-Dunham Theater & Gallery, a venue she co-manages with Cameron Cobane. Then, Ben Stockman suggested they write their own game show.

Now, “Thorn In My Side” as it’s called, is heading into its second season at the Hooker-Dunham with the first show happening 8 p.m. tonight. Ward hosts and writes it with Stockman, James Gelter and Jesse Tidd.

Brattleboro Community Television, which airs the shows, named “Thorn In My Side” the series of the year during its award ceremony. Past episodes can be seen at brattleborotv.org/thorn-my-side.

Stockman said he wanted the group to make “a unique game show for the Hooker-Dunham to start establishing a regular audience.”

“I think for the first one, we didn’t have any idea what we wanted the show to be like,” he said.

“Over time, we kind of established a tone, a style and recurring formats of games. We also still pitch and make up entirely new games for each show as well.”

After having such a fun time participating as a contestant during the first show, Gelter asked to be part of the effort going forward, and the writers told him they planned on asking him anyway. For influences, he said successful comedy games can be just as helpful as unsuccessful ones.

Gelter watched British game shows “Taskmaster” and “House of Games” a lot. They are not competitive in the way American game shows are, he said.

Stockman cited “Bunk” and “At Midnight,” two Comedy Central game shows in the United States, as other inspirations. He also emphasized the desire to make the show as fun as possible for participants and the audience.

One of Gelter’s favorite games for “Thorn In My Side” was “Is it a hat?” Contestants were shown a silhouette of an image and must decide their answer. One image had two monkeys sitting inside of a snake.

The first episode featured a game where contestants had to guess if a bird name was real. For both the real and the invented birds, images were shown.

“After that first game, I was like, OK, we’re good,” said Ward, who was very nervous going into the inaugural show.

Shows always have one game involving physical activity. In one instance, contestants had to wear plastic baby hands on dowels and achieve what Stockman called “adult tasks” such as making a cocktail and writing to a state representative.

Gelter said the most complicated game required contestants to choose their own adventure on a self-destructing space station.

One time, the crew rented cameras from BCTV to film at Bonnyvale Environmental Education Center in West Brattleboro. Contestants had to complete outdoor challenges, with clips played during the show at the Hooker-Dunham.

Immersed in local theater themselves, the writers invite friends from the scene to be contestants in the show. They also have a sign-up sheet at the shows.

Tidd, who ended up playing on three shows and in the championship tournament, said he immediately fell in love with the concept. When another writer left to live in Los Angeles, he jumped on the chance to join the team.

“The unpolished nature of the show is part of the appeal,” he said.

Stockman said the writers take on other roles such as preparing props, design work and technical details. When the writer responsible for being the scorekeeper at each game left, they asked Tidd to take over. Stockman noted Tidd is funny.

Audience members are asked to fill out a survey at every show. Their answers are then turned into a game that night.

“I think the vibe of the show and what we’ve cultivated with the audience is we’re all kind of in it together,” Ward said.

Gelter said he’s “never worked on any project that was so much work for something so stupid, but I use stupid in a very positive and comedic sense.”

“It’s purely silly,” Ward said. “We put a lot of work into making it as silly as possible.”

Stockman added, “As silly and accessible as possible.”

“I’m really proud of being able to make a show that is a comedy show that doesn’t traffic in any kind of punching down or comedy that could be taken in a way that hurts some people’s feelings,” Stockman said. “This is basically wholesome, guilt-free comedy. It’s also absurd. It’s not universal but at the very least, it’s friendly in its tone.”

Children have been asked to be part of games. Ward said she will alert parents when they come that shows are not written with kids in mind, and she can’t guarantee what the contestants will say.

“They’re improvising and seeing this for the first time,” she said.

Gelter said the writers don’t rely on current events or knowledge of major pop culture to make up games. Although, Ward noted one game had contestants guessing if words were the name of a medieval torture device or a metal band. (Iron Maiden?)

The Hooker-Dunham hosts “Thorn In My Side” on the third Thursday of every month. COVID and other events can cause schedule changes so hookerdunham.org is kept up to date with event information.

Attendees are asked to pay what they can or a suggested donation of $10. The Hooker-Dunham Theater requires proof of vaccination against COVID or negative test for admittance. Audiences must be masked.