Scott Dikkers, the founding editor of The Onion, spoke at the Massachusetts College of Liberal Arts in North Adams, Mass., on Thursday evening. 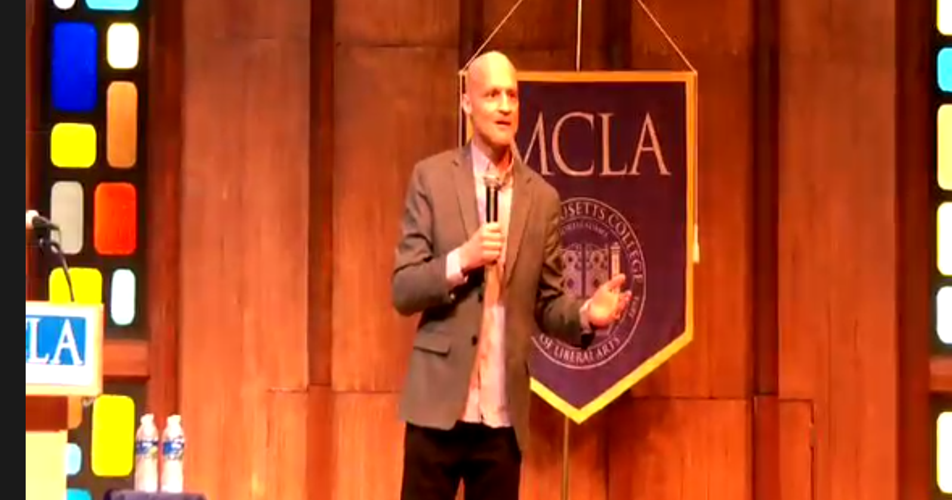 Scott Dikkers speaks at the Hardman Lecture series at Massachusetts College of Liberal Arts on Thursday.

Scott Dikkers, the founding editor of The Onion, spoke at the Massachusetts College of Liberal Arts in North Adams, Mass., on Thursday evening.

Scott Dikkers speaks at the Hardman Lecture series at Massachusetts College of Liberal Arts on Thursday.

NORTH ADAMS, Mass. — Scott Dikkers, the founding editor of The Onion, filled an auditorium with laughter by addressing his role in the avalanche of fake news and the stink The Onion so often leaves behind.

At the Massachusetts College of Liberal Arts on Thursday evening, Dikkers’ spoke as part of the Hardman Lecture series; his topic was “Fake News in the Age of Misinformation: The History of The Onion and How the Philosophies and Practices Have Adapted Over Time.”

The Onion’s story began in 1988 when Ronald Reagan was president. Dikkers said USA Today created “infotainment,” a type of news that is presented to be entertaining, as well as informative — but mostly entertaining. The publication included a lot of photos, he noted. Infotainment essentially created a picture book, where the main focus was entertaining the eye instead of the mind.

“If you cut out the pictures, there’s almost nothing to the paper,” said Dikkers.

“USA Today hasn’t changed at all, but the world has all sunk to USA Today’s level,” he said. After seeing the success of USA Today, two college kids, Tim Keck and Christopher Johnson, on a college campus in Madison, Wis., decided they would start The Onion. It was named after one of the founders’ unfortunate eating habits.

They wanted to start an on-campus humor magazine that would tear down USA Today, because it was a “threat to journalism.” USA Today won its first Pulitzer in 2018 (after 30 years of direct Onion opposition).

The magazine never happened, because glossy color print products were a bit out of budget for the college students. Instead, they decided to print The Onion on newsprint.

“In a world that seems to make less and less sense, as time goes on, it made sense that the ‘newspaper of record’ should also not make sense,” said Dikkers. The founders “just made stuff up” to fill the pages of the paper.

When politicians and pillars of the community make a habit out of lying and scamming the common people, there should be a news source that does the same. The Onion was made to have fake articles, fake reports and overall “outright, damnable lies,” said Dikkers. We’re in a “post-truth world,” where fake news reigns supreme because it’s the only thing that makes sense, he noted.

The daily news, the real news, has become so outlandish that fake news seems realistic. Even Dikkers has a difficult time distinguishing Onion headlines from real ones.

Dikkers wasn’t a part of the project until the third edition of the paper, after he hurled heavy critique at the first two editions. A year later, the two original founders of the fake news outlet bowed out, and Dikkers bought The Onion, and all the stress that it came with, for $3,000.

Like the two “goofballs” that started “the most trusted news source in the world,” Dikkers said with a side of sarcasm, most people working during the early days of The Onion had no experience in journalism “and a lot of us, to be honest, were hopped up on some kind of controlled substance, legal or illegal, for much of the time that we were working,” he said.

He said he found his best writers by looking in the depths of human existence for people who were bitter, hateful and had no prospects in life. The character of his staff led to entertaining and outrageous headlines, but that’s also what got The Onion into trouble.

Still, Dikkers believes the legal troubles helped the publication grow, because actual news outlets only wrote about The Onion when it caused a scandal. One of the first instances of this was with the governor of Wisconsin at the time, Tommy Thompson, who went on to work for George W. Bush.

Dikkers said he often heard that The Onion would be “sued out of existence” from people who could have been more grateful to be featured on the cover of the publication.

A lawyer, paid by one of the complainants who got the free exposure, showed up at the office one day threatening to sue the publication out of existence. Instead of pushing The Onion back into the ground like he promised, this lawyer became The Onion’s pro bono attorney.

“He’s like the worst human being on the planet,” said Dikkers, but he read the paper prior to print to ensure there were no stories that could be actionable under the court of law, he deflected any legal issues that arose and, as a fan of The Onion, he was able to get a sneak peek at the upcoming issue.

As The Onion rose in power, traditional newspapers were going out of business. Infotainment became commonplace. Investigative journalists were being fired left and right only to be replaced with “bite-sized nuggets of news,” said Dikkers. “Blatantly editorial news outlets, masquerading as news, were becoming really popular.”

He has a theory that the traditional news outlets saw The Onion’s success and attempted to replicate it. More comedy equals more readers.

“I thought I was doing it as a joke. I wasn’t trying to influence the whole world of journalism,” said Dikkers. But, he doubled down and continued to create content.

By the mid-2000s, online videos grew in popularity, and outlets like CNN and Fox were uploading their own video content. The Onion followed suit and started making videos that appeared to be real news, but were satire.

This is when Dikkers became exposed to nonreaders or “people who only look at flashing moving pictures, who don’t actually comprehend words.” These people were “gullible” and believed the stories that were meant to be completely outlandish and comical.

Some people recognize The Onion is a joke, and “they deserve that,” he said. Others don’t recognize the articles to be comic relief and consider it to be actual fake news, and “that’s their problem.”

“This whole situation should send us all a message … like a laser beam right to our brains, a clear and powerful message that is so powerful, it can make us more critical thinkers,” said Dikkers. “It can make us a more educated citizenry. And it can make us more informed voters. But that message is simply — don’t believe everything you read.”

The Hardman Lecture series is hosted by MCLA and funded by the Hardman Family Endowment.

“I thought I was doing it as a joke. I wasn't trying to influence the whole world of journalism.”