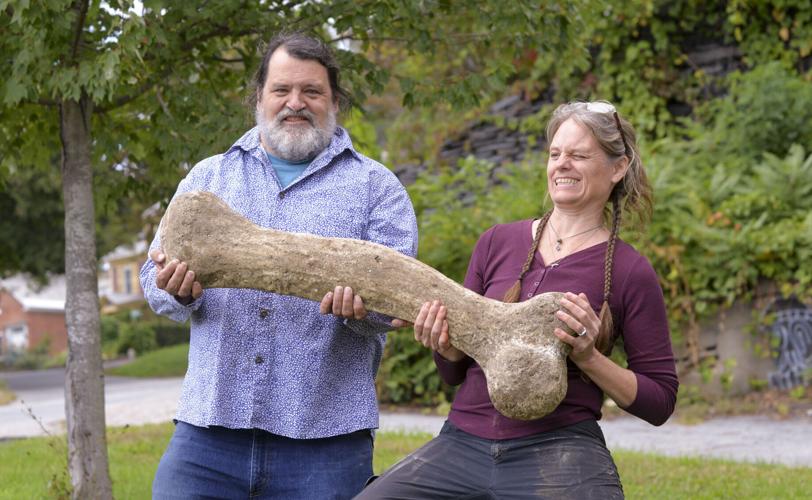 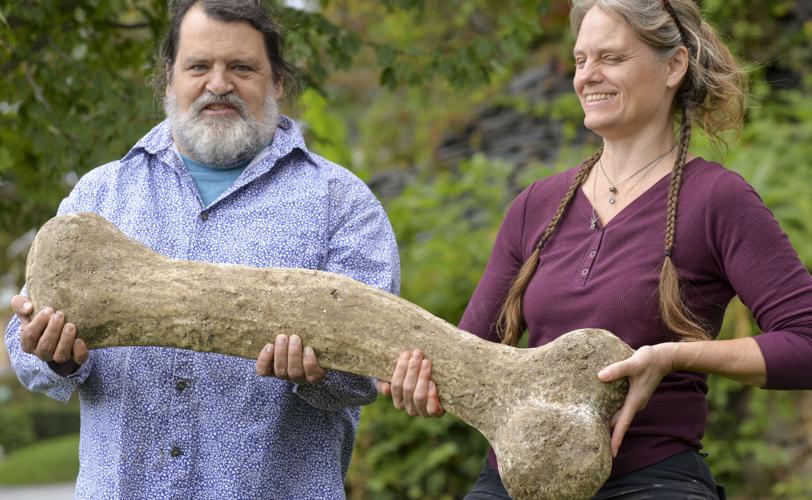 BRATTLEBORO — Gallery Walk will host another archaeological dig — this time, for dinosaur bones.

Rolf Parker-Houghton and Cynthia Parker-Houghton of Brattleboro have been asked how to tell fake dinosaur bones from real ones. They said they investigated methods for making them and made a bone themselves so they’ll be able to distinguish between the two.

Last year, the University of Brattleboro dug up remains from an alien crash site at “Lawton’s Lawn” on Elliot Street across from the Brattleboro Transportation Center and the Brattleboro Fire Station. The same location is where the dino dig will occur from 6:30 to 8 p.m. Friday.

The couple said they want to bring “some mirth” to Elliot Street. They also have permission from the owner of the former Lawton Dry Cleaners to use the property, which they see as a venue or street theater stage for university-related projects.

“So the running joke, if you will, is going to be that there are upwelling currents, bringing ancient stuff up to the surface,” Rolf said. “I don’t know — pirate treasure, Viking ships? I mean, who knows what might turn up in Lawton’s Lawn digs in the future?”

Rolf and Cynthia will appear at the event in their personas, respectively, as University of Brattleboro Dean Dr. Balderdash and Dr. Rea L. Faux. They will bring equipment for archaeological digging.

Like at the UFO dig, they will auction off dino bones found during the event. The money goes back into university programming.

Rolf said Dexter Marsh, who did some of his geological research in Greenfield, Mass., and died in 1855, was “famous in his day for amassing a large collection of fossil animal tracks.” An article reprinted the Vermont Phoenix states that “after the discovery of the track in the flagstone near his house, others were discovered.”

“The tracks of the largest species of birds, the Brontozoum giganteum, are from 14 to 20 inches long; the stride from 4 to 6 feet,” the article states. “The large ones were probably 20 feet high, weighing nearly a thousand pounds.”

This information tracks with some ideas Rolf and Cynthia have been exploring. Cynthia painted the Chicken Rex, a combination of chicken and tyrannosaurus rex on the outside of the Harmony Collective Artist Gallery, out of her imagination.

“Now, it turns out there are actually 20-foot-tall bird dinosaurs that were in this area,” she said. “So it’s just like digging way back in history.”

The University of Brattleboro’s motto is “fighting despair with humor and community.” Rolf said the group uses local history to create some laughs.

Cynthia recounted how the couple got excited about the idea of starting a fictional university. Rolf requested she design a T-shirt and it can now be purchased.

For the model bone to be used during the dig, Cynthia employed her skills as a sculptor to make the fake bone.

“We dug a bone-shaped hole in our backyard, basically, and mixed up some plaster to make it look sort of realistic,” she said.

At 6 p.m. Oct. 27, the university will host T. P. James’ Write Like The Dickens Supernatural Flash Fiction Contest. James was a local writer who worked at the Reformer and spiritualist who claimed he was channeling the ghost of Charles Dickens when he penned a successful novel. Rolf had written a chapter about him for ”Print Town,” a book about Brattleboro’s literary history.

“The contest really is to honor his audacity and the fact that even if he was a con man, he followed through,” Rolf said. “He really did take his inspiration from Dickens and managed to finish a novel. I mean, no small feat.”

Author of the best written story will get $100. A performance of channeling Dickens’ ghost deemed best also will earn someone a prize.

Tiny Foot is another project the university has taken on. Cynthia was gifted a GI Joe doll, which she modified with a little paint and sculpted it to create a small Sasquatch. The couple have photo shoots with the creature they dubbed Tiny Foot, carrying it along with them on vacations where they research the habitation and population density in which it is found.

“We really would love it if people would borrow it,” Rolf said. “What we say is that it’s just to help them to be familiar because it’s an exact life size replica. So this way, they’ll be prepared when they see a real one. But if while they’re borrowing it, they also happen to get some photos of it out in the wild, that would be great.”

Cynthia views the projects as a way for the couple to play together.

“Something other than bills,” she said.

BRATTLEBORO — Unidentified flying objects may have crashed downtown, according to local residents who have a questionable past when it comes t…