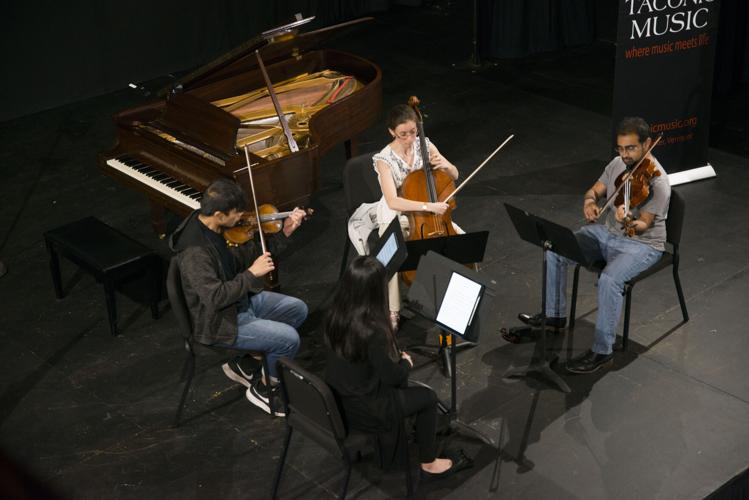 Taconic Music rehearses at the Riley Center in Manchester. 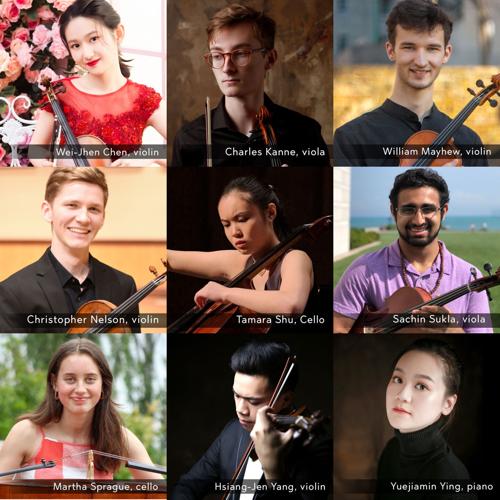 The students of Taconic Music's 2022 Chamber Music Intensive will perform in a Young Artists Concert featuring works by Beethoven, Ravel, Yi Chen and Robert Schumann at 7 p.m. Monday at Burr and Burton Academy's Riley Center for the Arts.

Taconic Music rehearses at the Riley Center in Manchester.

The students of Taconic Music's 2022 Chamber Music Intensive will perform in a Young Artists Concert featuring works by Beethoven, Ravel, Yi Chen and Robert Schumann at 7 p.m. Monday at Burr and Burton Academy's Riley Center for the Arts.

MANCHESTER — Normally, for college-aged classical music students, a performance of a string quartet would require a semester’s worth of work to get the fine detail just right.

The students of Taconic Music’s 2022 Chamber Music Intensive had about two weeks to learn and master music for the concert they’ll be performing at 7 p.m. Monday at Burr and Burton Academy’s Riley Center for the Arts. (Admission is free; donations are encouraged; masks are mandatory.)

Three string quartets are on the program for Monday, and last Friday, the quartets were performed for the program’s coaches in an otherwise empty Riley Center auditorium.

Two of the pieces are more impressionistic: Maurice Ravel’s “String Quartet in F Major,” and modern composer Chen Yi’s “At the Kansas City New Year’s Concert.” The third entry is a more traditional piece, but it’s Beethoven: “String Quartet No. 16 in F Major,” the last major work he completed before his death.

A fourth piece, Robert Schumann’s “Piano Quintet in E-flat Major,” is scheduled to close the program, with Yuejiamin Ying as soloist.

Daunting? Yes, but the young artists say they appreciate the opportunity to learn from Taconic’s faculty, and from each other, amid the summer beauty of Southern Vermont.

Last Friday, each group presented the first one or two movements of the piece they will perform Monday to their coaches. Taconic co-director Ariel Rudiakov (viola) and Thomas Landschoot (cello) followed along on printed scores, while Taconic co-director Joana Genova (violin) and Heather Braun (violin) watched the notes roll past on their digital devices.

Braun, a former Tanglewood Music Center fellow, performs as first violinist of the Arneis Quartet and has taught at Boston University and St. Anselm’s College. She remembers what it was like to be part of an intensive summer program.

“I remember being terrified,” she said. “For me, playing for my student colleagues was always much more terrifying in some ways than playing for my teachers.”

Now that she’s teaching, that anxiousness hasn’t quite gone away, “because I want the students to succeed the same way that I wanted to succeed.”

That said, the students at Taconic are impressive, and come to Manchester from some of the best music schools in the world, Braun said.

“And they’re here, and they’re learning. They’re just being completely immersed,” Braun said. “You’re literally living and breathing chamber music all day, from when you wake up until you go to bed.”

What’s it like learning a string quartet in a matter of days? The group tackling Beethoven — violinists William Mayhew and Christopher Nelson, violist Charles Kanne and cellist Tammy Shu — talked about the challenge, and the process, in the lobby of the Riley Center following rehearsal.

“I would say exhilarating,” said Mayhew, who studies at Indiana University’s Jacobs School of Music. “I think it’s a challenge that we don’t often have the opportunity to do at school, because we’ve got so many other things going on.”

“To put a whole quartet together takes a whole semester typically, rather than less than two weeks,” added Nelson, of Los Angeles, who will study violin at Bard College this fall. “And so it’s just a great challenge to be able to figure out how we’re going to maximize rehearsal time.”

The feedback is helpful — not only from the coaches, but from fellow students — said Kanne, a viola student at Indiana. “It’s nice to be able to play and get comments from a bunch of different people.”

Shu, a cello student at Indiana, said the feedback from the coaches is great — but so is the independence that comes with the program structure.

“I’m a big advocate for constructive criticism, but it also helps us to learn how to rehearse with each other without someone who’s constantly trying to tell us exactly what to do,” Shu said. “Like ‘You have to do this kind of bowing here,’ or ‘You have to do this kind of style here.’ It lets us play around with our own interpretations of what we want to do in the music, and it helps us grow as musicians that way.”

When the music stopped Friday, the critiques began. Sometimes they were specific, such as how much vibrato a given player should apply, or whether they needed to be more assertive in a given passage. But some were directed to an entire group — and less about technical skill and more about the way the music feels.

After the Chen Yi quartet played by Wei-Jhen Chen and Hsiang-Jen Yang on violin, Sachin Shukla on viola and Martha Sprague on cello, Genova urged the group to play with more authority in a slower section. “If you feel confident, the audience feels confident,” she said. “Those places need to be super, super solid.”

Rudiakov, after hearing the first two movements of the Ravel quartet, noted the gentle quality of the opening and offered that it needed “more warmth.” Landschoot, weighing in on a crescendo in the Ravel quartet, suggested musicians think of that increase in volume as “unfurling” rather than a straight line.

Shukla, a Boston native and Northwestern University graduate pursuing graduate studies at New England Conservatory of Music, said the process of learning music so quickly was easier than he had expected. The time to devote to the music, and the company of musicians who are serious about improving, has a lot to do with that, he said.

“These programs select people who want to spend their summer focusing on chamber music. So I think you get people that are much more serious about it,” he said. “And because we’re not bothered with a bunch of other nonsense we have to do, we have time to devote to it.”

Braun believes the students she’s teaching now are better than the students she studied with 20 years ago. “The depth and the musicality feels like it’s getting even more and more strong, and more committed,” she said.