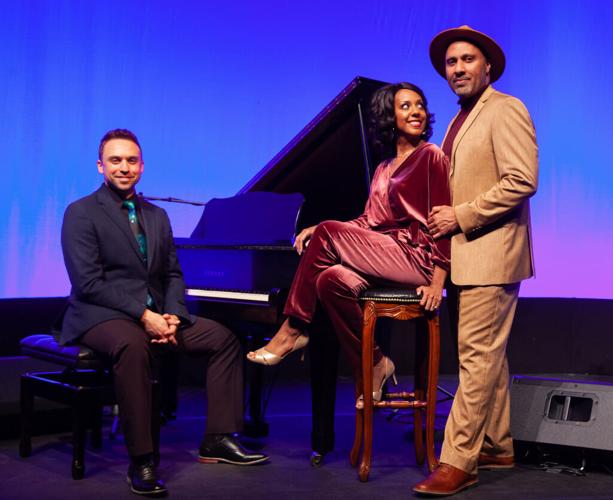 From left, Taylor Peckham, Christina Acosta Robinson and Ken Robinson are the stars of "Back Together Again: The Songs of Roberta Flack and Donny Hathaway" 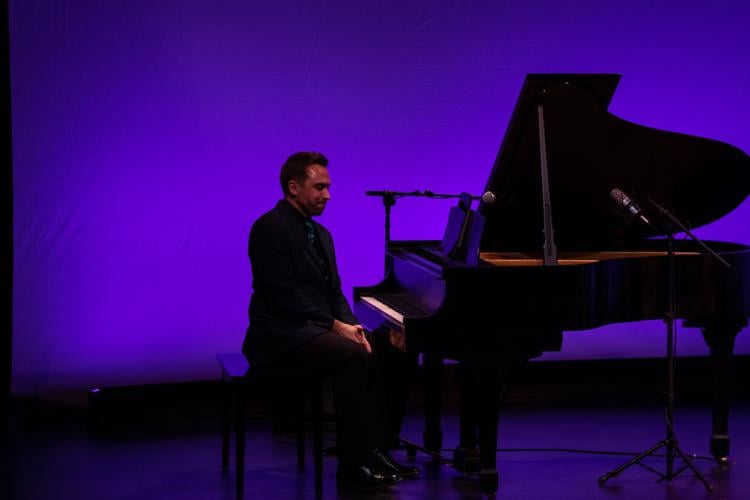 Taylor Peckham is the accompanist for "Back Together Again: The Music of Roberta Flack and Donny Hathaway," a new concert featuring Christina Acosta Robinson and Ken Robinson at Dorset Theater Festival.

From left, Taylor Peckham, Christina Acosta Robinson and Ken Robinson are the stars of "Back Together Again: The Songs of Roberta Flack and Donny Hathaway"

Taylor Peckham is the accompanist for "Back Together Again: The Music of Roberta Flack and Donny Hathaway," a new concert featuring Christina Acosta Robinson and Ken Robinson at Dorset Theater Festival.

DORSET — Let’s get this out of the way: “Back Together Again: The Music of Roberta Flack and Donny Hathaway” at the Dorset Theater Festival is not a “jukebox” production with a biographical plot based on the singers’ lives and note-for-note renditions of their timeless hits.

That’s not to say the concert, reaching the end of its two-week run on Sunday, isn’t chock-full of music. It goes 17-songs-deep into the artists' catalogues, well beyond their best-known hits.

But rather than a retelling of Flack and Hathaway’s story — their remarkable talents, their rocket rides to stardom, and the mental illness that contributed to Hathaway’s suicide in 1979 at age 33 — “Back Together Again” takes a more nuanced and more rewarding approach, musical director and pianist Taylor Peckham said.

Peckham compared the music in “Back Together Again” to the music in a movie: It's unrelated to the characters, but overlaps with their emotions and the plot arc.

That way, the music “supports and augments everything they're saying about themselves,” Peckham said. “So each of one of the songs is used as a tool to enhance and support their own lives, their own experiences.”

“Everything is so well designed and supported and authentic, yet it isn’t surface level,” Peckham added. “It’s open for interpretation. In their banter in their stories and in their interpretations of these songs they're presenting questions to the audience. They're presenting ideas the audience can then think about and embrace into their own lives”

That makes sense, since for much of the audience, the songs of Flack and Hathaway were the soundtrack of their lives. Flack’s heart-rending interpretation of “The First Time Ever I Saw Your Face,” released as a single in March of 1972, was Billboard’s No. 1 single for the year and earned multiple Grammys. “Where Is The Love,” released a month later (but recorded the year prior), won that year’s Grammy for Best Pop Vocal Performance by a Duo, Group or Chorus.

But there’s so much more to Flack and Hathaway's legacies than those two monster hits, as "Back Together Again" shows. Their duets “The Closer I Get To You’ and “Be Real Black For Me” are among its 17 songs, along with Flack’s “Killing Me Softly With His Song” and Hathaway’s “A Song For You” and “I Who Have Nothing.”

In “Back Together Again,” there's no lush orchestration — just Peckham on piano accompanying Ken and Christina Robinson’s vocals. That, Peckham said, underscores the strength of the songs, and the artists' vocal talents.

“Even if you do know the songs, even if you know every single word, you’ve never heard them or seen them in this way,” he said. “What it does is allows you to not get caught in any of the production … instead what you get is “Those are the words to that song — what is that about? That’s touching me right now.’ It’s a very personal experience.”

“Christina is not only a performer and singer and natural musician but also a poet who does visual art,” Peckham said. “Ken is a songwriter and musician and a playwright. They both are overflowing with talent in every direction.”

Peckham's relationship with the couple dates back to 2017, when they were all part of a tryout for “Summer: The Donna Summer Musical” in San Diego. The three quickly became friends, and when that musical moved to Broadway, they started brainstorming new projects they could do together.

In 2017, Courtney Dale of the Merrimack Repertory Theater in Lowell, Mass., reached out to the Robinsons about putting "Back Together Again" the musical on stage. She brought it to Dorset Theater Festival Artistic Director Dina Janis' attention, and Janis said she was “thrilled and immediately said yes” to collaborating on the project, in Lowell and in Vermont.

“For me personally, the music has deep meaning,” Janis said. “Not only is it beautiful, but the impact these two artists had at that time, during the peak of the Civil Rights movement among other things — was profound and important.”

As the daughter of two jazz musicians, “I truly believe that music has the power to heal, engage and inspire in ways that seemed particularly important to me coming out of the past several years both in terms of COVID and in terms of political and societal upheaval,” Janis said. “Tryin' Times” — well, yes. That song by Hathaway truly could have been written this morning.”

As the accompanist, Peckham said he’s been particularly moved by two of the songs from the production. Flack’s “The First Time Ever I Saw Your Face,” he says, is a “very free-form, emotionally true and heart-wrenching edition of that.” And Hathaway’s “Someday We’ll All Be free,” he said, resonates differently every time he plays it — “it’s very touching and very meaningful in different ways.”

"Back Together Again: The Songs of Roberta Flack and Donny Hathaway"

COVID: Masks required in all indoor common areas and during the performance.