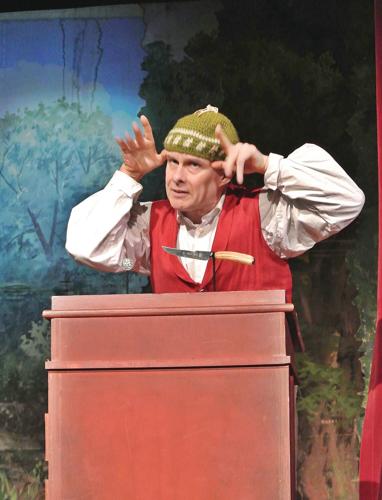 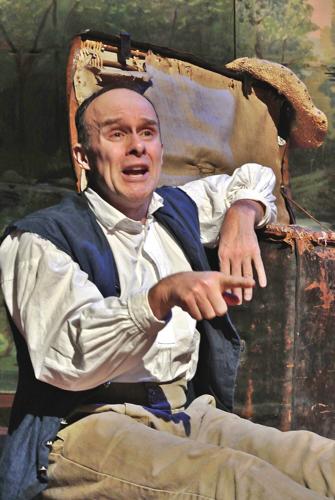 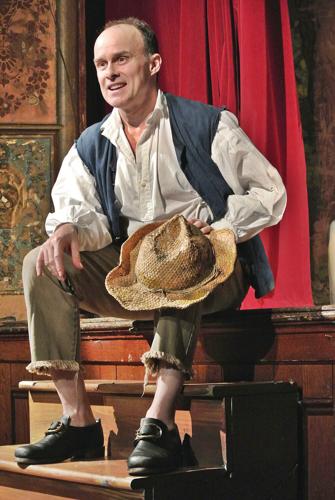 CAMBRIDGE, N.Y. — Oliver Wadsworth and Hubbard Hall are a match made in heaven.

That is, the award-wining veteran actor and the venerable 19th century opera house in the middle of rural upstate New York have joined forces for a refreshed yet limited run of the sublime one-actor play, "The Tarnation of Russell Colvin."

I emphasize "limited." There are four shows left in the run, and anyone wanting to take in the play with the advantage of professional theater production enhancements, as well as some 19th century touches in scenic design courtesy of Hubbard Hall's historic stage backdrops, must get to it this weekend.

The play, written by and starring Wadsworth, is directed by longtime stage pro Kirk Jackson, who also teaches drama at Bennington College.

The story involves Russell Colvin, whose 1812 murder in Manchester Village spurred local debate between the presence of a ghost, and an imposter.

According to historical accounts and legend, Colvin, who was married to the expecting Sally Boorn, vanished without a trace. Sally's brothers, Jesse and Stephen Boorn, were suspected of foul play. In 1825, the ghost of Colvin reportedly appeared to Sally's Uncle Amos, claiming the two brothers killed him. This led Amos to dig up some of Russell's artifacts in the Boorn cellar - after having been led there by Colvin's ghost.

The two brothers were tried and convicted of murder, and Stephen was sentenced to hang. Then Colvin miraculously appeared and exonerated the brothers of his killing. But almost immediately, he vanished.

Since I had not seen earlier versions of the play, which premiered this past summer at Dorset Theatre Festival, I was curious to see how Wadsworth and Jackson managed to get this story out through the platform of one man playing a multitude of roles.

Having now seen it, the word I would use is, "adroitly."

It's not easy delivering both plot and thematic essentials through one actor, even when that Thespian is as talented and accomplished as Wadsworth. But deliver they did — and wisely included a story synopsis and historical background in the playbill by Berkshires theatre critic Gail M. Burns. This helps get the initiated out-of-town visitors oriented to the flurry of action on stage.

In fact, at times, that flurry grew into a blizzard, as Wadsworth came forth in storm-like proportions to deliver laughs, a few tears, and even more introspection.

It's clear that director Jackson has put Wadsworth through the paces, as the actor seamlessly moved from one role to the next, with the change or a hat, the turn of a handsomely weathered leather foot locker, or the flip of an ethnic accent — which, by the way, Wadsworth is quite good at.

This was brilliant, and exhaustive acting on Wadsworth's part, and it pushed all of us in the audience to think past the peerless entertainment before us to the messages of humility and humanity with which "Tarnation" wants us to walk away.

Lights by Calvin Anderson were surgical and timely. Costume design by Richard MacPike brought forth an entirely different time and place, with Mike Rancourt's set of props both fleshing out both the utilitarian and aesthetic.

The show was stage managed by the most capable Daniel Salzer, and Seamus Carey's fiddle playing took us back in time, and mood, to where we needed to be as an audience.

The play ran for a crisp 75 minutes with no intermission.

There is a reason why a one-actor performance remains on the task list for professional actors to earn their union card. This is about as "grass roots" as the craft gets, and to see one performance holding an audience in rapt attention for more than an hour is truly art at work.

But it's hard work, and to date Wadsworth, Jackson, and "Tarnation" have somewhat been roughing it in touring the show for single performances in old Vermont town halls.

In the midst of Hubbard Hall's 40th anniversary season, artistic director David Andrew Snider has offered the show production boosts that have taken it to a new level — as have the changes along the way that Wadsworth and Jackson have wisely worked on.

As such, the 19th century jewel of an opera house and the one-man play about a 19th century mystery with deep human overtones are a perfect marriage. The wedding last weekend was memorable; go catch the honeymooners this weekend before they leave town for their next stop.