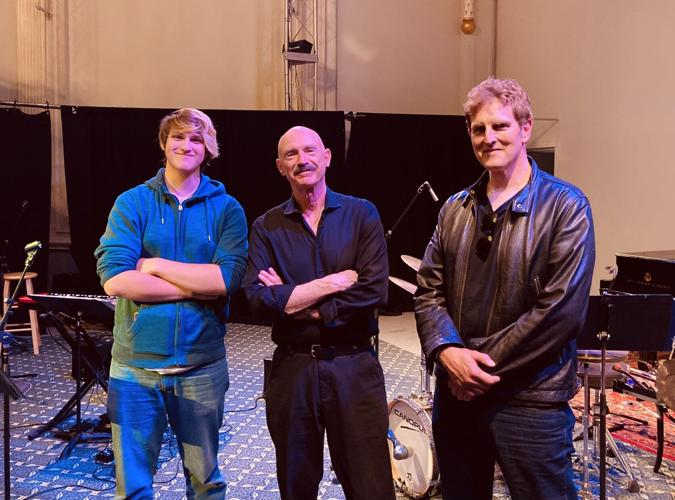 King Crimson bassist and Levin Brothers member Tony Levin, center, as seen with BBA student Michael Rudiakov, left, and his father, Ariel Rudiakov, right, at the Strand Theater in Hudson Falls, N.Y. this past summer. Ariel Rudiakov took the opportunty to ask the Levin Brothers to play in Manchester, and they'll perform here on Sept. 27. 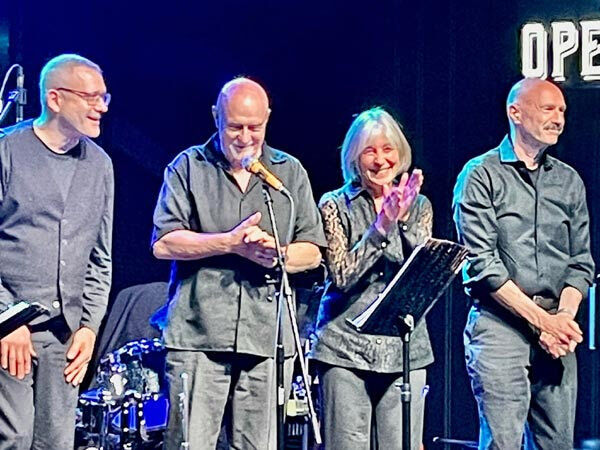 King Crimson bassist and Levin Brothers member Tony Levin, center, as seen with BBA student Michael Rudiakov, left, and his father, Ariel Rudiakov, right, at the Strand Theater in Hudson Falls, N.Y. this past summer. Ariel Rudiakov took the opportunty to ask the Levin Brothers to play in Manchester, and they'll perform here on Sept. 27.

MANCHESTER — Taconic Music is starting a new jazz series, and what better way to start than with an accomplished group formed by two brothers with impressive musical resumes?

It’s the first of several jazz concerts being offered by Taconic Music. There will be “Jazz in the Barn” at the Inn at Manchester Celebration Barn in November, with performances by the Kris Allen Trio on Nov. 15, Willis Delony and Friends on Feb. 14, and the Asin Doykin Trio on April 25.

“I believe this group — along with the others we will be presenting — should give people the firm idea that the bar is set very high from the outset for Taconic Music’s first jazz adventure,” co-founder and co-director Ariel Rudiakov said.

How did Rudiakov land the Levin Brothers? He asked them.

“I went to hear them in June at the Strand Theater in Hudson Falls, N.Y. The attendance, though sparse, afforded an opportunity for me to actually speak with Pete and Tony Levin,” he said. “They were so approachable that with equal parts enthusiasm and impulse, I invited them to come to Manchester. To my delight, within a week we had inked a deal.”

Of that performance, Rudiakov said the onstage chemistry between band members is “both easy and energetic.”

The ensemble, making a stop at SVAC on its Fade to Blue tour, also includes drummer Jeff Siegel and special guest Ali Ryerson on flute. They will perform originals along with takes on classics by artists such as The Beatles, Simon and Garfunkel, and Jimi Hendrix.

Tony Levin, a member of the iconic progressive rock band King Crimson, has recorded and toured with Peter Gabriel and performed with artists including Paul Simon, Pink Floyd, Yes and John Lennon.

Siegel, a veteran of the New York City jazz scene, has performed and recorded with Ron Carter, Pat Metheny, Jack DeJohnette and a host of others. Ryerson, consistently voted as a top flutist by Downbeat magazine, has performed Carnegie Hall, the Kennedy Center and the Blue Note, and published the widely acclaimed Jazz Flute Practice Method.

Bringing the Levin Brothers to Manchester is more than an impressive first booking for the series. For Rudiakov, it connects the dots to a teenage musical experience, as he saw Tony Levin perform with King Crimson. The band, formed in 1968, is widely cited as helping create progressive rock as a genre.

“I first saw King Crimson when I was 16 in New York City, and have just witnessed jaw-dropping musical prowess from [Levin] and many colleagues with whom he plays on stage,” Rudiakov said. "His inventiveness can be heard in so many arenas.

“Take Peter Gabriel’s song ‘Shock the Monkey’ as an example. Tony Levin plays the Chapman Stick on that one, giving the bass line a totally different character,” Rudiakov said. “For the upcoming concert, Tony will likely move between standard electric and standup bass with ease.”

As for Taconic adding jazz to its offerings, that’s a step the organization has had in mind for years, he said. “Our mission includes broad language that leaves room for different styles of music in addition to classical.”

“Since we are not experienced jazz players ourselves (and with the help of some specific and generous individual and business underwriting) we felt it a good time to put on the presenter's hat and invite four different jazz groups and individuals to come and play in Manchester,” Rudiakov said. “Why not? Folks can get through their Mondays, then on four select Tuesday nights take a break and come hear something different."