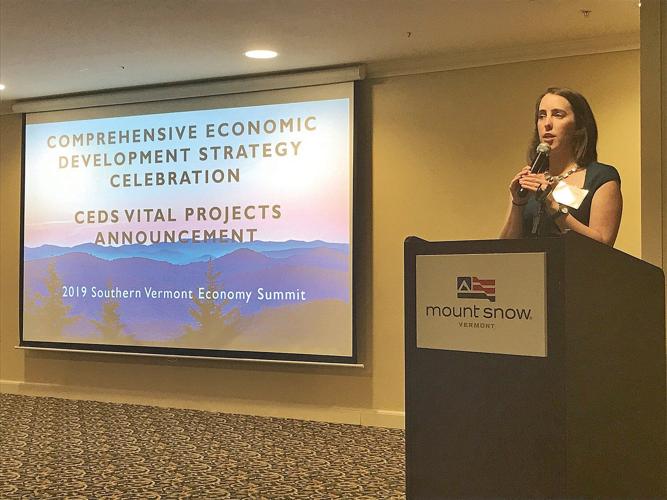 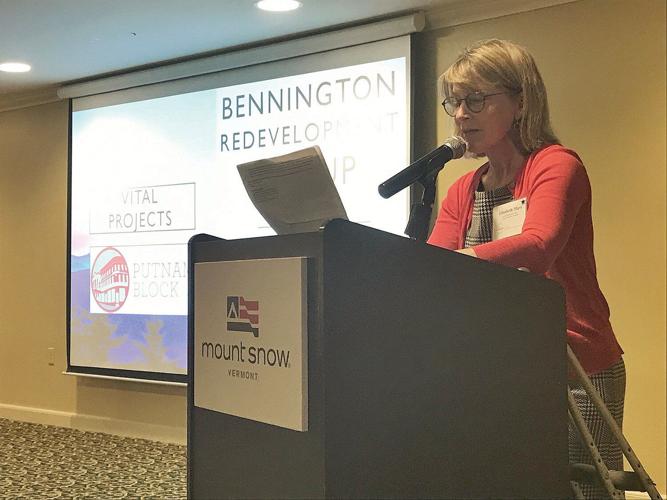 WEST DOVER — Out of 71 projects submitted by 47 organizations in Bennington and Windham counties, six made the cut to be considered "vital" to economic development in the region.

"What an amazing process," Elizabeth Marx, selection committee member and senior philanthropic adviser at the Vermont Community Foundation, said Thursday during the third annual Southern Vermont Economy Summit at the Grand Summit Hotel at Mount Snow in West Dover. "We looked at each of these projects really carefully."

This year's Southern Vermont Comprehensive Economic Development Strategies Vital Projects included the SoVermont marketing campaign, the Entrepreneurial Consortium; the Windham Region Village Water and Wastewater Need Assessment and Feasibility Plan, advocacy work to support the expansion of commuter railroad service, renovations at the Old School Community Center in Wilmington, and the second stage of the Putnam Block Redevelopment in Bennington. A committee made up of 13 community members from the two counties selected the list.

CEDS documents "are designed to bring together the public and private sectors in the creation of an economic roadmap to diversify and strengthen the regional economy," according to Southeastern Vermont Economic Development Strategies, an arm of the Brattleboro Development Credit Corp. They "should analyze the regional economy and serve as a guide for establishing regional goals and objectives, developing and implementing a regional plan of action, and identifying investment priorities and funding sources. In addition, many federal and state granting programs are looking to a regional CEDS when making funding decisions."

"We have two counties with common priorities," said Jonathan Cooper, community and education specialist at the Bennington County Regional Commission, noting that the counties have about 80,000 people when the populations are combined.

Meg Streeter, SeVEDS board chairwoman, said the process brought together more than 100 professionals and stakeholders.

Goals of her group include increasing population, improving infrastructure, expanding businesses and enhancing social conditions. The vision statement calls for the southern part of the state in 2030 to "be home to a resilient, creative and inclusive community in which businesses and people thrive and prosper."

The next part of the Putnam Block project will bring about two new mixed-use buildings with offices, medical services, restaurants and retail establishments. Housing Vermont will have an option to buy a portion of the property for up to 30 affordable housing units.

The Entrepreneurial Consortium is looking at ways to encourage creative projects around business and technology. It unites ideas brought forth by The Lighting Jar, Startup 802 and INSTIG8.

The water and wastewater feasibility plan was proposed by Windham Regional Commission Executive Director Chris Campany as a way to spark economic activity and housing development in villages. He also proposed advocating for inclusion in Massachusetts rail service expansion.

Cooper told attendees the SoVermont marketing initiative is to attract people to come work and live in Vermont. He said employers constantly say: "There are opportunities if we can get the right people."

"Recruitment without retention is just a vicious cycle," he said.

The goal is to get people to think about lifestyle while making career choices. Cooper said people want to spend more time outdoors and spend money in downtowns or village centers.

"We feel Vermont checks a lot of those boxes," he said. "One of our assets is being in Vermont, a state that consistently ranks at all assessments of quality of life."

Attendees were asked to text SoVermont to 345345 "to become a marketing partner." A logo for the program can be put on a company or organization's website to link to sovermont.com.

"Emerging leaders" were recognized earlier in the summit. Sarah Lang, Southern Vermont Young Professionals coordinator who works as a talent specialist and internship coordinator at the BDCC, said community members are asked to nominate people who are making an impact on the area about six months before the summit.