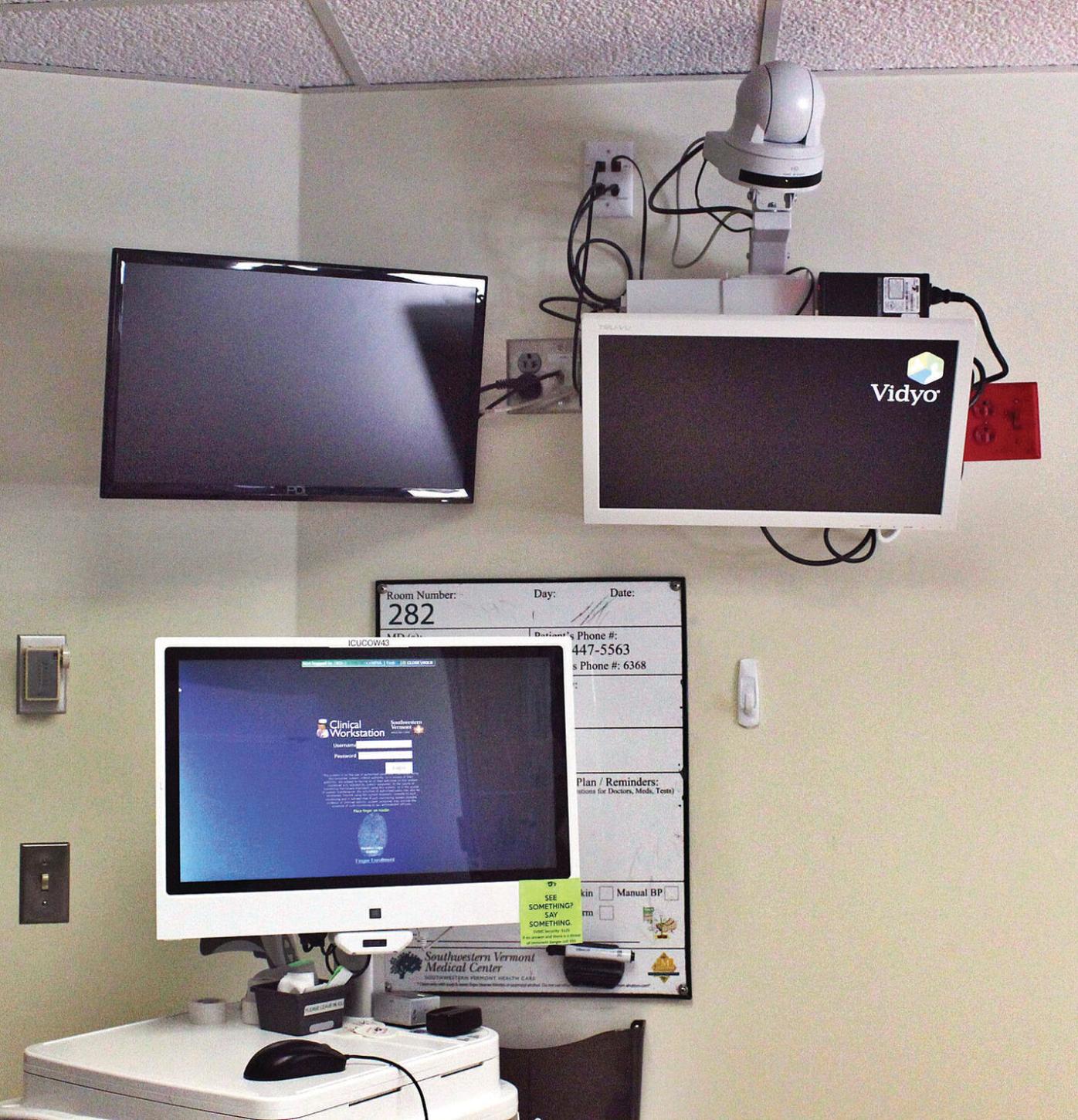 A typical TeleICU setup at SVMC: A camera and monitor are displayed next to the room's television and computer and can be activated by the push of a button. 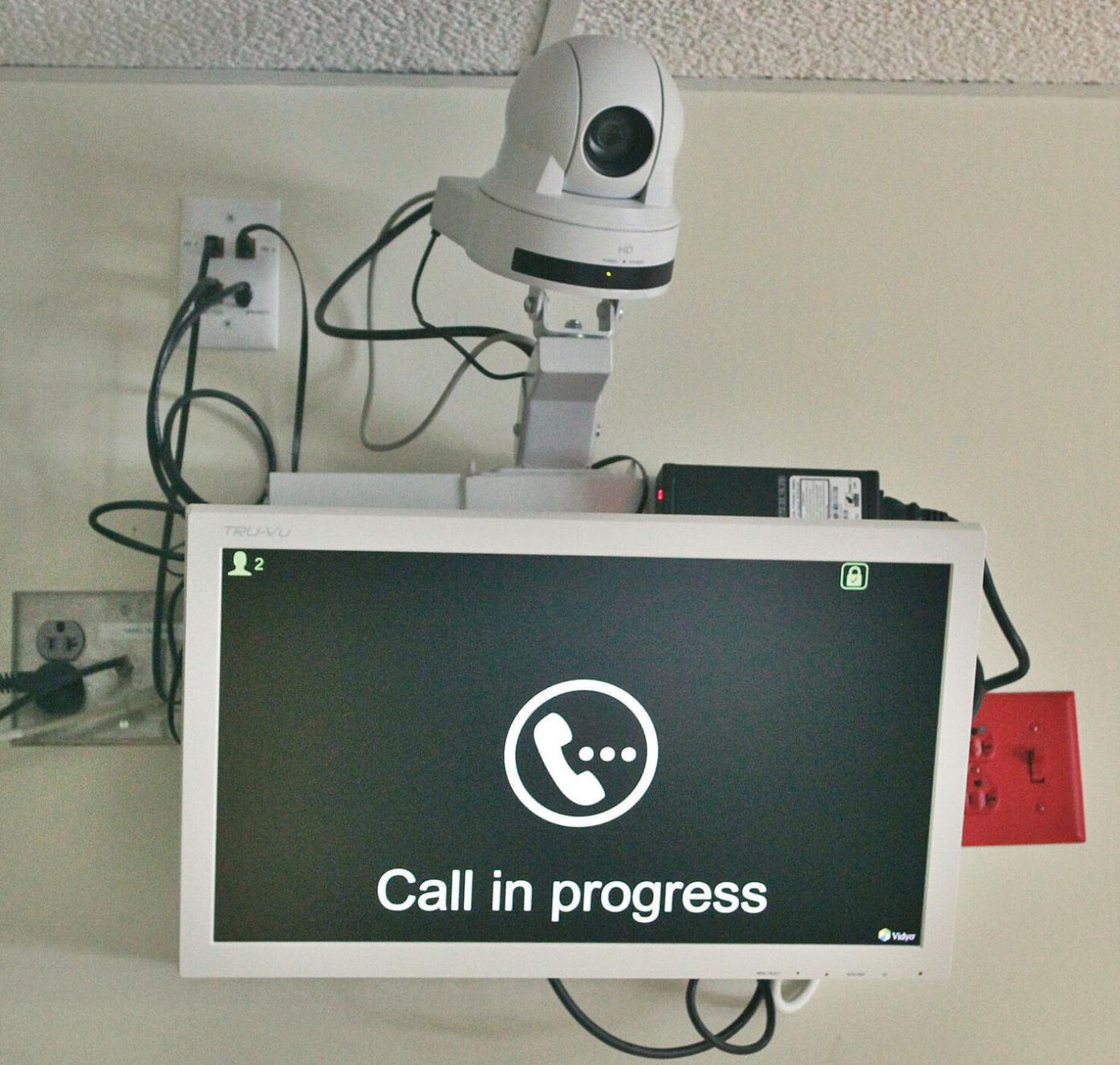 SVMC's telemedicine monitor and camera are turned on and ready for a call. 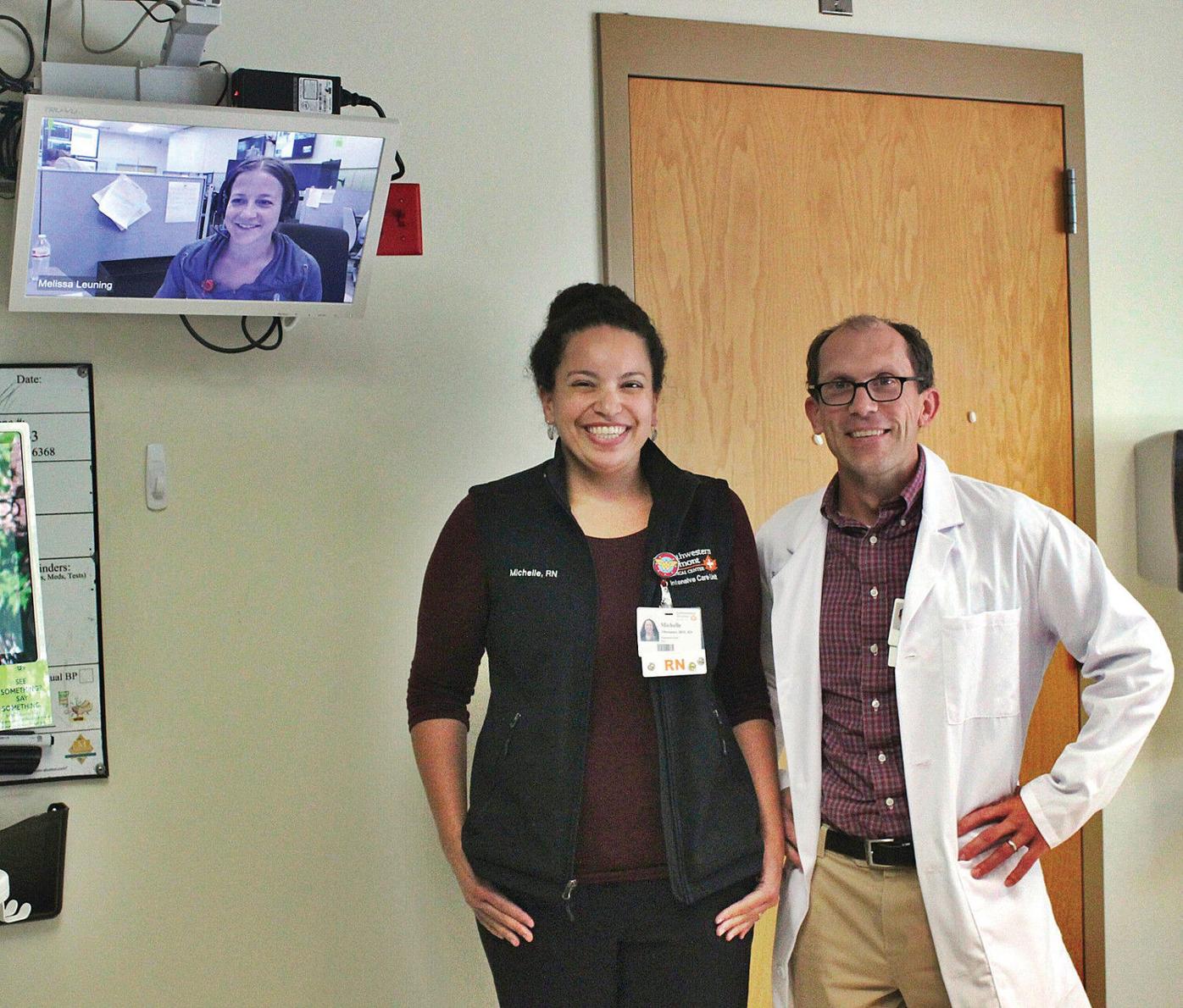 A telemedicine doctor appears on the monitor in an ICU room while Michelle Obenauer, nurse, and Trey Dobson, SVMC's chief medical officer, stand by.

A typical TeleICU setup at SVMC: A camera and monitor are displayed next to the room's television and computer and can be activated by the push of a button.

SVMC's telemedicine monitor and camera are turned on and ready for a call.

A telemedicine doctor appears on the monitor in an ICU room while Michelle Obenauer, nurse, and Trey Dobson, SVMC's chief medical officer, stand by.

BENNINGTON— Thanks to a new technological initiative, intensive care patients at the Southwestern Vermont Medical Center will have round-the-clock access to an extra team of medical professionals from afar.

This new initiative, called TeleICU or eICU, involves a monitor and a camera setup in each ICU room, allowing critical care specialists from other institutions to check in on patients through a state-of-the-art real-time system.

TeleICU has been tested for the past few months at SVMC, but it is expected to be fully implemented this August. The program partners with telemedicine leaders Dartmouth-Hitchcock in Lebanon, N.H. and Avera Health in Sioux Falls, S.D.

Much like Skype or FaceTime, critical care doctors are called with the push of a button and appear on a monitor at the front of the room next to the patient's television. TeleICU doesn't mean there are less doctors taking care of patients here in Bennington; it's quite the opposite.

Patients will still have round-the-clock care by SVMC's doctors and nurses, but TeleICU adds an extra dimension to care. The program allows patients with certain conditions that otherwise require a transfer to be treated locally instead.

Vital signs like blood pressure, heart rate, and pupil size can be monitored by zooming the camera in on monitors, the patient, or even a doctor's badge. The fisheye lens can also zoom out to see the entire hospital room. When not in use, the camera is rolled back and the monitor is turned off so the patient doesn't feel like they are being watched.

The equipment does not record, and the patient can refuse the service if they choose. There is no extra cost to the patient.

The software receives data in real-time and looks for both positive and concerning health indicators. For example, if a patient's blood pressure has been steadily trending down, the software's artificial intelligence will alert SVMC medical staff so the patient can be treated.

In addition to allowing critical care doctors to participate in patient care, this new technology will help with recruitment of medical professionals, which can be difficult for a rural hospital like SVMC, Dobson said. Doctors and nurses may choose to come to SVMC knowing they can work with telemedicine.

TeleICU can also reduce the number of days someone needs to stay in the ICU, Dobson said. It also will ensure the timely delivery of medicine and care.

SVMC started "earnestly" considering telemedicine as an addition to their technology in 2014, Dobson said. Approximately three years ago, he made a trip to South Dakota to work with an Avera critical care doctor and an emergency doctor for a day to better understand the technology. He's also made many trips to Dartmouth-Hitchcock.

In April 2017, SVMC began using telemedicine equipment in the neurology department, which could be moved on a cart to any room at the hospital. This technology allows round-the-clock access to a board-certified neurologist for patients who suffered a stroke or other neurological problem.

The hospital also began using telemedicine in the emergency department last May in collaboration with Dartmouth-Hitchcock's Center for Connected Health to consult and treat patients.

Dobson says grants and donations for the technology have helped the hospital implement this equipment and the software is paid for as a subscription.

"Patient satisfaction nationally is extremely high," Dobson said of the program. "It's strongly supported by the physicians."