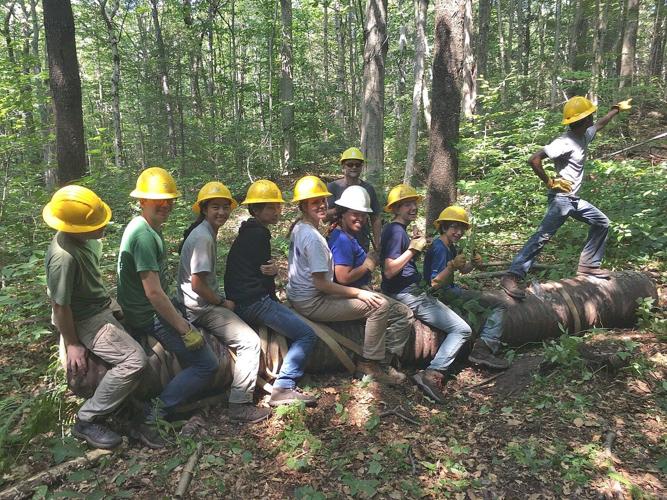 Volunteers pose with the culvert they removed from the Glastenbury Wilderness. 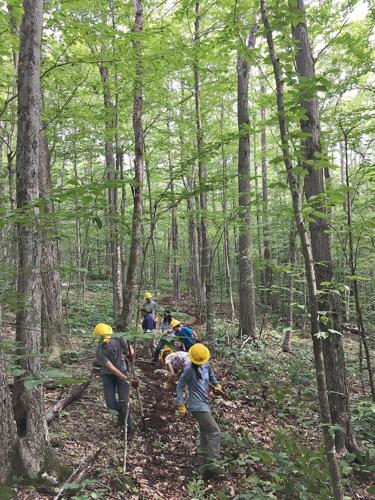 Volunteers from the Student Conservation Association work to relocate the Bald Mountain Trail away from a stream.

Volunteers pose with the culvert they removed from the Glastenbury Wilderness.

Volunteers from the Student Conservation Association work to relocate the Bald Mountain Trail away from a stream.

MANCHESTER — Having just dragged a metal culvert down the side of Glastenbury Mountain, Katie Rice and the team of volunteers alongside her were downright exuberant.

"We got stuck in the mud pits a couple of times," she admitted, "but we got through it."

Rice, a California native and recent college graduate, recently traveled to Vermont for the first time as a crew leader for the Student Conservation Association. Working under the guidance of local U.S. Forest Service employees, the SCA volunteers — many ages 16 to 19 — have traveled to the region from across the country to undertake a series of projects in the Green Mountain National Forest.

"These projects were funded through money that we got from the Washington office for watershed improvement in wilderness areas, particularly in municipal watersheds," explained USFS forest planner Melissa Reichert, who led the group's work in areas surrounding the Bennington municipal water supply. "All three took place in the Glastenbury Wilderness."

Beginning with Woodford's Little Pond Trail, the SCA volunteers installed approximately 15 water bars — drainage structures used to prevent erosion — before laying stepping stones and other drainage mechanisms on an adjacent trail. The crew then moved on to the popular Bald Mountain Trail which, according to fellow SCA crew leader Bailey Hutchison, proved to be a little more complicated.

"We did a trail relocation to pull the path further away from the stream, about 74 feet away, to keep it safe for water quality," Hutchinson explained. "It was a really good experience to do a trail relocation with respect to wilderness guidelines; to make it clear that the trail is there without degrading the surrounding area."

By the time they had reached their third project in the Glastenbury Wilderness, however, Hutchison and Rice's crew realized that the problem solving had just begun. Awaiting them, among a wealth of trash in need of removal, was an approximately 20-foot-long culvert located about a mile up the mountain.

"Our grand finale really brought the team together," Rice said with a laugh. "The first day we were given these tiny hand saws to cut the metal, but when one of those broke we knew it just wasn't going to work."

With the help of Reichert and USFS forest technician Ken Norden (and a few additional tools), the crew was able to split the culvert in half the following day. Carrying the first half of the culvert down the mountain on their shoulders, however, proved disheartening.

"When we got to to bottom everybody's spirit was just broken," Hutchison said. When it came time to move the remaining half, the crew (equipped with helmets) had devised a new strategy employing straps and sticks to pull the culvert down the mountain. This time, things progressed much more quickly.

"When we reached the bottom we had officially finished all three of our projects," Rice explained. "It was a cool way to end."

With over 900 miles of trails sprawled throughout the Green Mountain National Forest, volunteers like those led by Rice and Hutchison are necessary to maintain those systems, as well as the resources held within them, according to Reichert.

"People don't often understand what it takes to maintain these systems that we have, but I think that's really important," she said. "There are a lot of reasons to care about how trails are maintained."

One of those reasons is to keep the region's outdoor resources accessible for recreation, according to Reichert, who notes that such work gives both locals and visitors "the opportunity to get outside and enjoy this wonderful place." Perhaps the largest concern for such maintaining organizations, however, is preserving those resources in perpetuity for future generations.

"Our work isn't just for recreation, but for conservation," Rice said. "We're the Student Conservation Association, and while our work is mostly focused on trail maintenance and creation, everything was done in partnership with the biologists and the ecologists at the Forest Service."

"Trails can contribute to resource issues just like roads and other ground disturbing activities can," Reichert added. "When trails are next to streams or in wet areas, unless they're done very carefully, they can degrade those riparian and wetland areas."

Beyond preserving concrete resources, though, Reichert hopes that the work also has a more ephemeral impact on those completing it.

"A big goal of the Forest Service is to bring up the next generation," she explained. "To give them opportunities to experience the outdoors and become engaged with it."

"For me it's about inspiring these kids to have a connection with the land," added Rice, who developed her own passion for conservation through outdoor summer camps. "Being the leader now, instead of the student, I have a chance to instill that same sense of wonder, curiosity, and passion for nature."