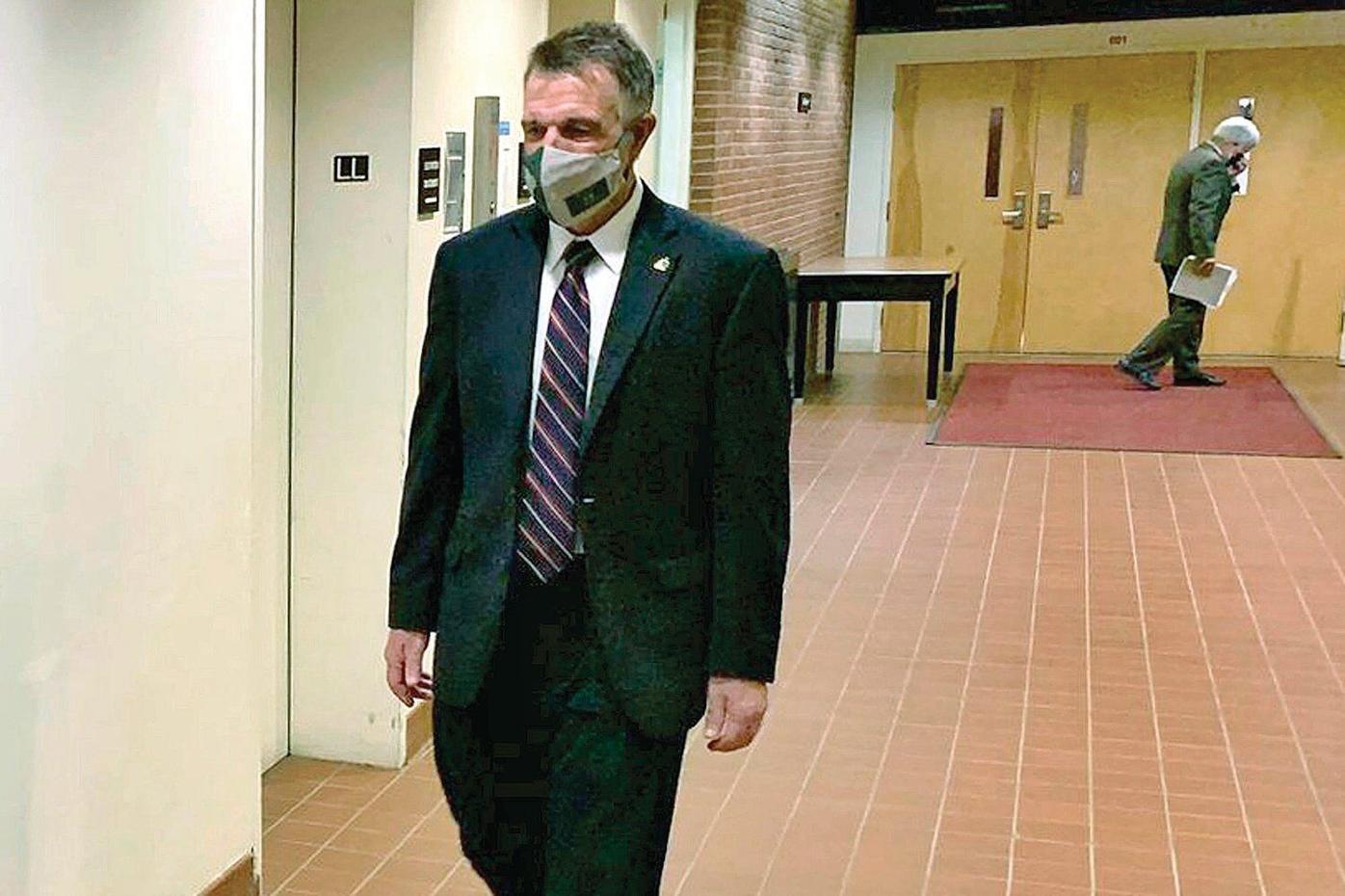 In this still image provided by WCAX-TV, Vermont Gov. Phil Scott departs after a media briefing Tuesday in Montpelier. 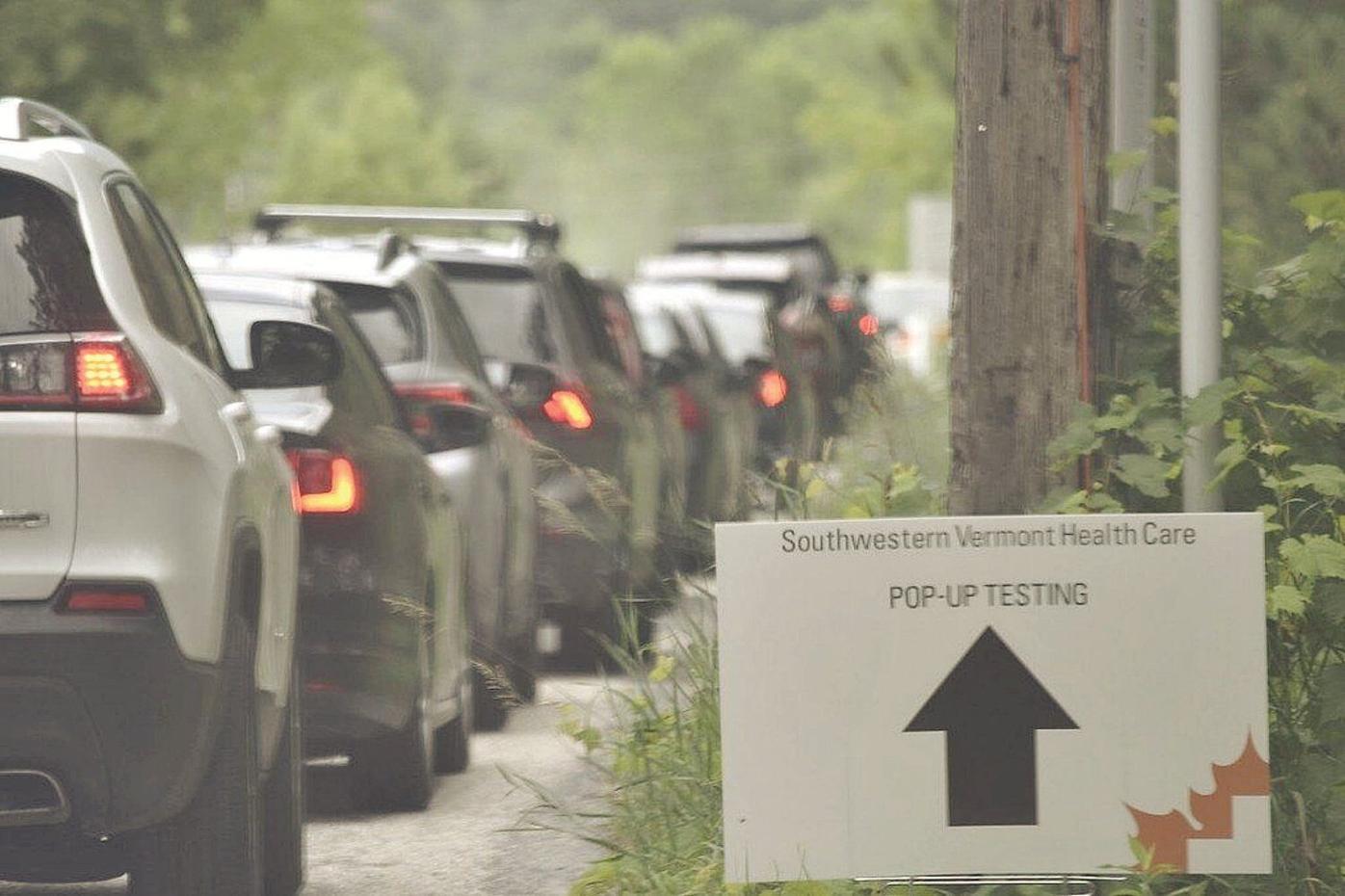 In this still image provided by WCAX-TV, Vermont Gov. Phil Scott departs after a media briefing Tuesday in Montpelier.

MONTPELIER — Vermont's public health commissioner on Tuesday ruled out an outbreak of the COVID-19 virus in the Manchester and mountains area.

Dr. Mark Levine, speaking at Gov. Phil Scott's twice-weekly COVID-19 briefing, said the department has interviewed and retested all 65 people who had earlier tested positive for the virus by antigen test at Manchester Medical Center, and found all but four are not confirmed cases.

The four confirmed cases are "not epidemiologically linked to each other," but make up two pairs of people, Levine said.

When combined with the results of more than 1,000 pop-up tests taken last week in Londonderry and Manchester, that works out to 1,613 people tested or retested with a PCR test — and only five positive results, Levine said.

That produces a positive test rate consistent with the rest of the state — below 2 percent, Levine said.

"Therefore, we do not believe community transmission of COVID-19 has occurred," he said.

Levine also said there appears to be a correlation with the use of antigen tests on asymptomatic people and the later negative PCR follow-up tests. He said the touted high specificity of the antigen test, which was approved on an emergency basis in May, was based on studies using a relatively small number of people who were COVID-positive — not a population with a relatively low rate of infection such as Southern Vermont.

"One would not expect any of the Manchester results to be false positives," Levine said. "However, as pointed out after significant epidemiological and lab investigation it does appear these positive results do not represent true positive results. So there's something else going on that I'm pretty sure we will uncover."

But he also said that there are potential complications with PCR tests, from how they are collected, stored and transported to the manner in which they're conducted.

"There are so many steps along the way ... a number of things could have gone wrong," he said.

And he warned that there's no such thing as a 100-percent accurate test.

"Dealing with uncertainty is part and parcel of what we buy into in medicine," he said.

The manufacturer of the test and testing equipment, San Diego-based Quidel, said on Wednesday that it had reached out to the clinic and is investigating the findings.

Quidel Marketing Director Jeannine Sharp Mason said the company will have a representative on site in Manchester this week "to gather intelligence, talk with those involved, download and analyze the instrument data, and observe the physical operation."

"The clinic believes that their positive test results are accurate. At this time, there is nothing to indicate a failure of the Quidel test system," Mason said.

Dr. Janel Kittredge-Sterling, an emergency medicine doctor and co-owner of Manchester Medical Center with her husband, Dr. Thomas Sterling, has defended the clinic's handling of the tests, and its decision to alert the public a week ago, through the Town of Manchester, that it had seen a high number of presumptive positives.

The Department of Public Health had not included those figures in its reporting, because it relies upon PRC test results.

Monday, in an interview and on Vermont Public Radio's "Vermont Edition," she said MMC is eager to work with the Department of Health to find out if the discrepancy came from the antigen test, from handling of the PCR tests, or some other reason not yet known.

On Tuesday Levine reported that officials in Maine are dealing with a similar issue. The Bangor Daily News reported Tuesday that the Maine Center for Disease Control would be revising its count of "probable" cases from a summer camp, which it did not identify, that used antigen testing. The story is similar to Southern Vermont's story: The camp's antigen tests were positive, and the state's follow-up PCR tests were negative.

"There’s no conspiracy, there’s no divisiveness, we're not telling anybody not to trust the Department of Health. We have to work in collaboration ... to figure out why is there a discrepancy? Something happened," Kittredge-Sterling said.

"We're not pointing fingers ... but we have to ask clinically and objectively is there something wrong that happens on PCR side? We need to look at all the angles and I am way transparent — if there is something that happened on our end, I will own it."

"I do have empathy for what families are going through. I know this is very stressful. And there’s a lot of fear," Kittredge-Sterling added. "There's significant confusion here making it hard for folks to know how to proceed or what to think about themselves.

"We are doing our part and our due diligence to figure out to the best of our ability why this discrepancy is occurring," she said. "But I cannot say that it wasn't because we didn't have [COVID-19] cases. We did."

The potential of an outbreak was first reported a week ago, when, after months of collecting only negative tests results for COVID-19, Manchester Medical Center’s antigen test for the virus returned positive results. From July 10, when the first five positive antigen tests were recorded, there was a "tremendous influx of people" coming in for tests, she said. There were three specific pockets of people who had been "out and about with a lot of other people," at a sporting event, swimming or backyard barbecues.

The majority of those contact tracing patients "was not typical respiratory presentation," Kittredge-Sterling said of the symptoms. They had gastrointestinal symptoms, including nausea, cramping and diarrhea. By Wednesday, July 15, the number of presumptive positives had increased to 59.

Pop-up test sites in Londonderry and Manchester took more than 1,000 samples. Some businesses protectively closed outright for a few days; others went back to curbside pickup only.

In the meantime, the number of negative results on PCR follow-up tests continued to rise, while the positive tests remained steady — and small.

The antigen test looks for the presence of certain proteins that are part of the virus, while the PCR test — which stands for "polymerase chain reaction" — seeks the virus' unique genetic signature.

The antigen test's benefits are that it returns results much more quickly than the PCR test, which can take days. Its drawback is that it produces a greater number of “false negative” results — tests showing the lack of COVID-19 when it’s actually present.

Leaders in Manchester and Londonderry, where several of the presumptive positive test results were recorded, reacted with cautious optimism at the news.

“I understand what [Levine] is saying and I don’t take exception to it,” said Kevin Beattie, Londonderry’s emergency management director. “By definition I can agree that it doesn’t appear to be an outbreak. On the other hand I hope it's not misleading to the public … that there’s not any cases."

In Manchester, town manager John O’Keefe called it “probably the best news of the week.”

“Just like everybody else we're all left still wondering” about the discrepancy between tests, O’Keefe said. “I think we'll get to the bottom of eventually but for now moving into category of not having an outbreak is fantastic.”

That said, O’Keefe recommended common sense precautions for residents and businesses, including adherence to the town's mask regulations.

“We’re still in the midst of a pandemic and people should act accordingly,” he said.

Asked what asymptomatic people should do if they want to be tested, Levine suggested that four to seven days after contact with a person exposed to COVID-19 would be the best time frame. "An antigen test for someone who hasn't had any symptoms and might not have exposure would have a higher false negative rate than a PCR test," he said. "If you're asymptomatic and want a test, a PCR would be preferable."

However, Levine expects antigen tests, because of their lower cost and higher speed, will be part of the COVID-19 public health strategy moving forward, especially among people showing symptoms.

"This doesn't mean antigen tests will be thrown away and never used again. These tests will have a role for sure," he said.