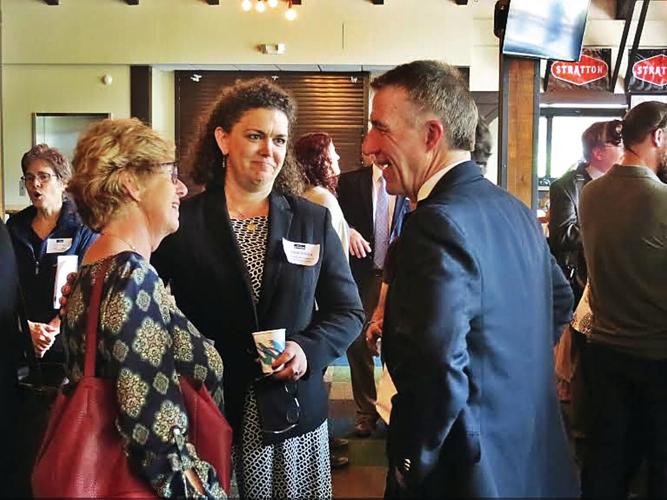 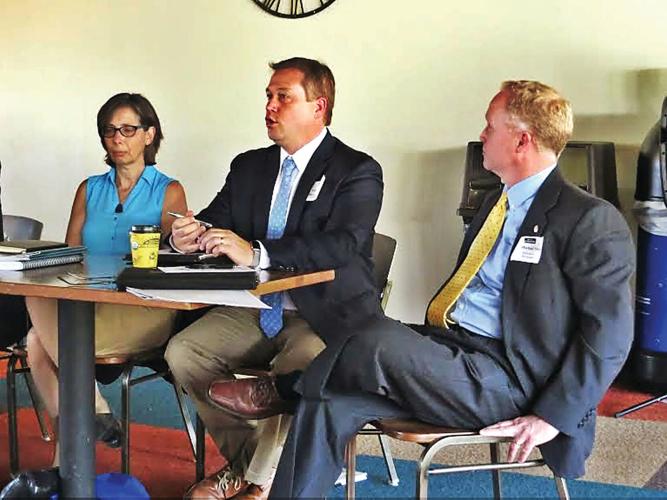 STRATTON — A panel discussion that closed the first Southern Vermont Economic Development Summit highlighted both what the area needs to forge regional approaches to development and what already is in place in Bennington and Windham counties to bring that about.

The day-long conference, held at Stratton Mountain Resort, was sponsored by development entities in the two counties that propose seeking grant funding to prepare a comprehensive regional development plan over the next year.

Bill Colvin, of the Bennington County Regional Commission, who led the panel discussion, said at the conclusion that he actually doesn't want to wait for a detailed plan to begin implementing regional approaches.

"I would like to see planning that moves us in that direction, along that continuum of understanding," he said, "and I would like to see us identify a project or two that we can act on quickly and successfully in the short-term, even as we're planning long-term for success."

The regional meeting, which attracted 130 participants to the Stratton base lodge, follows a unanimous vote by a working group in Bennington County in April to apply jointly with Windham officials for a grant through the U.S. Department of Commerce's Comprehensive Economic Development Strategies program.

That funding would be used to create a development strategy for all of Southern Vermont and to enlarge the existing Southeastern Vermont Comprehensive Development Strategy group, which formed five years ago, to include 44 towns across both counties.

Colvin asked where panel members saw opportunities to boost business and other development using a regional approach in Southern Vermont.

R.T. Brown, Windham County Economic Development program project manager with the Brattleboro Development Credit Corp., said that over the past two years he seen "some really neat developments with the entrepreneurship ecosystem."

The region has an opportunity to use existing programs, he said, to spread the word that this area is a good place to launch a new business venture.

Jon-Michael Muise, of the U.S. Department of Agriculture's Rural Development program in the state, said federal assistance is available for water and sewer infrastructure projects that can have a significant impact on private development.

The program also can support housing development and rehabilitation of existing housing — seen as a significant need in the region, Muise said.

Many towns in the region are too small to have municipal water and sewer systems, said Susan McMahon, associate director of the Windham Regional Commission, but alternative solutions can sometimes be found when residents work together as a community.

Community groups "outside town government but working with town governments" have found creative ways to address infrastructure and other development issues, she said.

Katie Buckley, commissioner of the Vermont Department of Housing and Community Development, said thinking outside the box in creating partnerships can help smaller towns deal with costly infrastructure issues. The former town administrator in Guilford, she said the town was able to work out an agreement with Brattleboro to extend a water line from its system to the smaller community, which spurred private development.

Buckley also said she believes it's crucial to have development tools like the ability to form new Tax Increment Financing districts to fund municipal infrastructure projects that lead to private investment. Under the TIF program, a community can bond for infrastructure improvements and repay the loans using a percentage of the new tax revenue generated by private development.

The Legislature has agreed to allow up to six new TIF districts for a program that had been capped at the existing number three years ago, and the change is expected to go to the governor's desk as part of a larger bill.

Adam Grinold, executive director of the Brattleboro Development Credit Corp., saw an opportunity to focus on the job openings being created daily as the baby boom generation retires from the workforce — by encouraging, training and recruiting younger workers to fill those positions in Southern Vermont.

In answer to a question on the need for more skilled workers for industrial jobs, Grinold said educational efforts have to focus more on preparing young people for those positions.

"We need to change the way that we are using our schools and the schools understand the communities around them," he said.

A colleague has noted that students can train to become an astronaut, but that there aren't any of those positions in Windham County, Grinold said, adding "So let's put our resources into training our youth to take the jobs that are here today."

There is an opportunity and a need to create a system for educators and business owners to better communicate on how to best address those needs, he said.

Panel members also reiterated the dire and well-understood challenges the Southern Vermont region faces. Statistics show the two counties are lagging behind the rest of the state in such areas as economic development, employment levels, income, population retention and the overall age of the inhabitants.

Those issues and others were cited by officials calling for formal cooperation across wider area, with greater combined resources and expertise, which also can leverage more state and federal assistance for development projects.

Speaking after the conference during a Young Professionals recognition ceremony at Stratton for emerging community and business leaders in Vermont, Gov. Phil Scott noted the loss of population among 25- to 40-year-olds and a declining school enrollment statewide as among the most serious challenges he wants to address.

During a question period, state Rep. Bill Botzow, D-Pownal/Woodford, chairman of the House Committee on Commerce and Economic Development, told the panelists that they are on the right track but said, "We have come together in a new way, thanks to the work of a lot of people. So it is a year from now, what would you like to see that we have accomplished together? Where can we go from here, together?"

McMahon said she would like to see a proposed Southern Vermont marketing plan in place, adding, "I think it is just time to get it done."

Noting that a district is proposed for the $50-plus million redevelopment effort planned around the Putnam Block in downtown Bennington and other projects, she said Southern Vermont has multiple needs that might be addressed through such districts, providing the pending legislation is signed into law.

"Thanks to the work of our legislators in Montpelier, that boulder got pushed uphill," Buckley said. "I think you can agree with me that it will become a financing tool that will help a handful of communities in rural Vermont make real change happen."

Asked about efforts to encourage development within the artistic community, Grinold said his organization has supported the New England Center for Circus Arts in Brattleboro and other groups. He said development officials are well aware of both a cultural benefit in supporting arts initiatives and often a substantial economic benefit.

McMahon said she's seen a trend toward brownfield redevelopment projects undertaken by arts organizations, "because they are very creative and they are willing to take on these projects [seeking multiple sources of funding]."

Colvin said that for several years he has promoted a regional approach to economic development, sometimes feeling himself one of only a few advocates on the Bennington County side.

"That has changed dramatically," he said. "But I think we have work to do, and a year from now I would love to see many times this many people speaking with the same vocabulary about the importance of a regional approach to economic development and the importance of pooling resources and leveraging common assets and to look beyond our single organizations and municipalities for those partnerships and opportunities."

Colvin said the process of preparing the application for federal funding to prepare a regional development plan will include three or four meetings in each county gather input and identify all the assets and resources available in the region. The application is expected to be submitted by September.

The summit conference was sponsored by the BCRC, the BDCC and the SeVEDS organizations.

Jim Therrien writes for the Bennington Banner and VTDigger.org. @BB_therrien on Twitter.