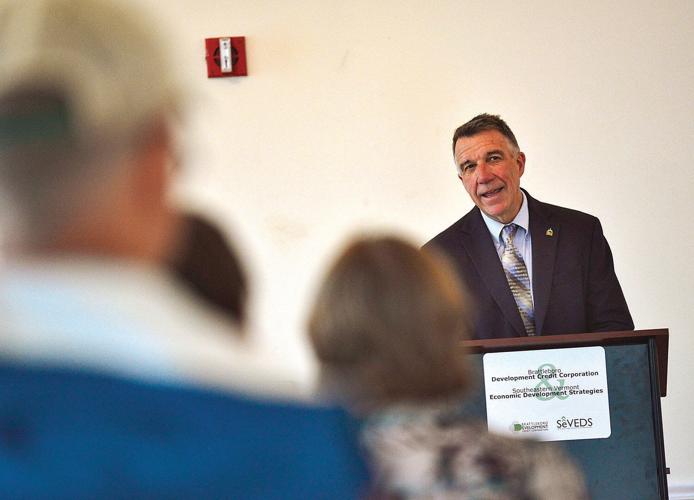 Gov. Phil Scott talks about the importance of having broadband hook-ups in smaller towns. 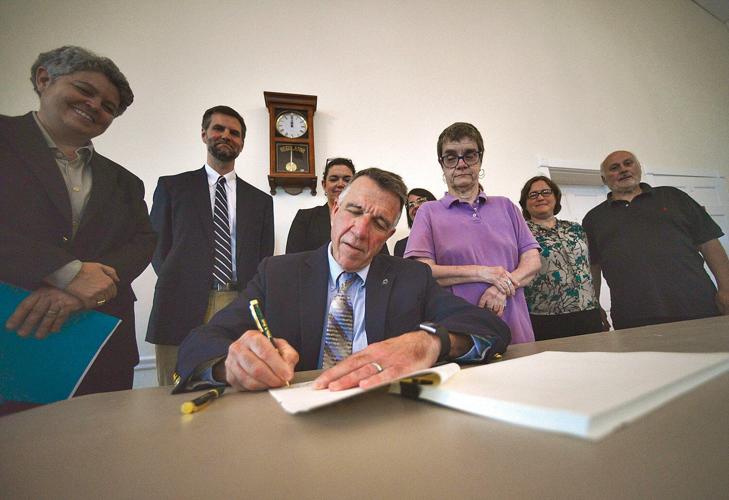 Gov. Phil Scott talks about the importance of having broadband hook-ups in smaller towns.

Scott said when he visited the valley in September 2017, the day started with a community forum in Readsboro, where initiatives and concerns around broadband had been discussed, as had the economically thriving times of a town that once had a hospital and two theaters.

"Community effort to bring back those days remain," Scott said, calling pride in the local area and hope of revitalization "inspiring."

At Dover Town Hall on Thursday, Scott signed into law H.513, saying it "increases funding to the Connectivity Initiative, which provides access to internet services in unserved or underserved areas. Because communities have the best understanding of what they need, it enables the Vermont Economic Development Authority to lend money for build out by community groups. It also creates a new broadband innovation grant program, which will fund grassroots solutions for rural Vermont and provide communities with technical assistance from the Vermont Department of Public Service."

The bill had "strong support" from the House of Representatives and Senate, Scott said, adding that all parties could agree "reliable broadband is important for economic growth, education, public safety and overall access to information, services and people all over the world."

Scott commended Rep. Tim Briglin, D-Windsor-Orange-2, and "especially" Rep. Laura Sibilia, I-Windham-Bennington, for their leadership on the issue in the House. Briglin, chairman of the House Energy and Technology Committee, said it had been a priority for Scott and House Speaker Mitzi Johnson.

Department of Public Service Commissioner June Tierney said the initiative will close the gap "where the market isn't getting it done."

"For a town like Dover, what we can say today is, 'Help is no longer on the way; help is here,'" she said. "We cannot sit still while the [Federal Communications Commission] figures out what to do."

Briglin said his committee studied the work of groups such as the East Central Vermont Telecommunications District, which describes itself as a municipal body with 24 member towns in east-central Vermont set up to build a community-owned fiber network. The group claims to have helped 3,500 customers get connected.

H.513 "takes an important step in starting to bridge the divide between the digital haves and the digital have-nots in Vermont," Briglin said. "This is kind of our first step in putting more fiber in Vermont's connectivity diet."

"Working with Laura is like being a parent to our children collectively and the child is the broadband bill," said Senate Majority Leader Becca Balint, D-Windham. "She would come up to me in the Statehouse and look at me and say, 'This is going to be safe on your side? We're handing it over. It's not going to the black hole of the Senate?' ... I'd say, 'You know me. It's important to me, too.'"

Balint said she helped a hen and chicks cross a road in West Brattleboro on the way to Dover.

"This is why we live here, we love the rural character of this place," she said. "I thought this bill is a lifeline for communities like Dover, West Brattleboro, Marlboro, Readsboro."

Helyn Strom Henriksen of Readsboro recalled having major surgery last June. She said her doctor told her to check in several times a day, but when she got home she found she was one of 40 to 50 other residents whose cell service and internet went out for a few days.

Henriksen said Sibilia's level of concern matched or exceeded her own.

"She not only took immediate action, she kept me posted on ways in which to stay connected and stated she would see this through and she did," said Henriksen, who expressed gratitude for the law being signed.

Sibilia said community members are going to have to get involved for the legislation to work.

The programs should be designed to stand on their own, Briglin said, meaning not subsidized.

"Success breeds success," Scott said. Other programs have inspired hope "because it's daunting ... it's difficult and it's expensive."

Karen Horn, director of public policy and advocacy for the Vermont League of Cities and Town, said her group "strongly supported" the bill and intends to spread information about related initiatives.

AARP, an advocate of the bill, praised passage of the law.

"Broadband is the electricity of the 21st century," Greg Marchildon, AARP Vermont state director, said in a statement. "Communities, families and businesses that lack broadband service are falling behind and this legislation gives towns and cities the tools to plan for and deploy fast and reliable broadband service. For older Vermonters, broadband is essential for reducing social isolation and improving access to civic engagement, telehealth and their communities. Being able to send emails and engage in social media allows older Vermonters to stay connected to family and friends, access online newspapers and magazines and be a part of the digital world we all live in today."