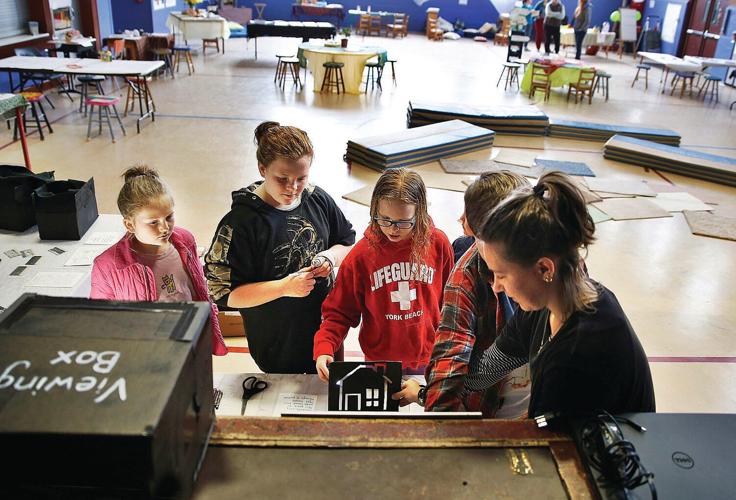 Children gather together to learn about the science behind how a camera works on Wednesday morning at a workshop at the Village School of North Bennington. From left to right are Laney Rogers, 7; Taylor Lampron, 11; Riley Lampron, 10; and teacher Josie Burnell, a junior at Bennington College. 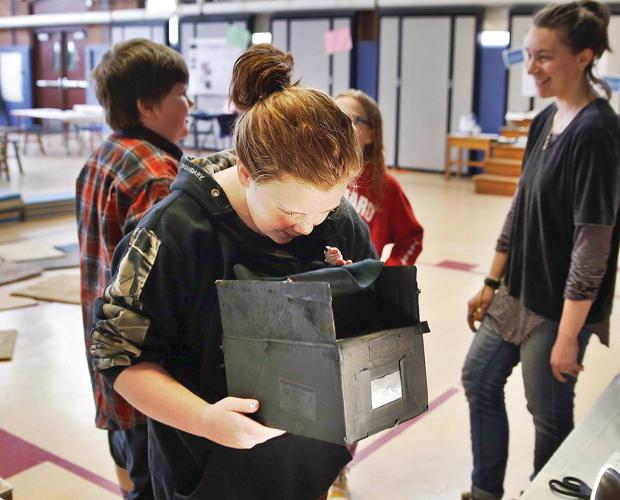 Taylor Lampron, 11, of North Bennington, looks through a pinhole camera on Wednesday during an optics and camera-making workshop at the Village School of North Bennington. The workshop was part of a seven-day pop-up science playhouse called Scientificus. 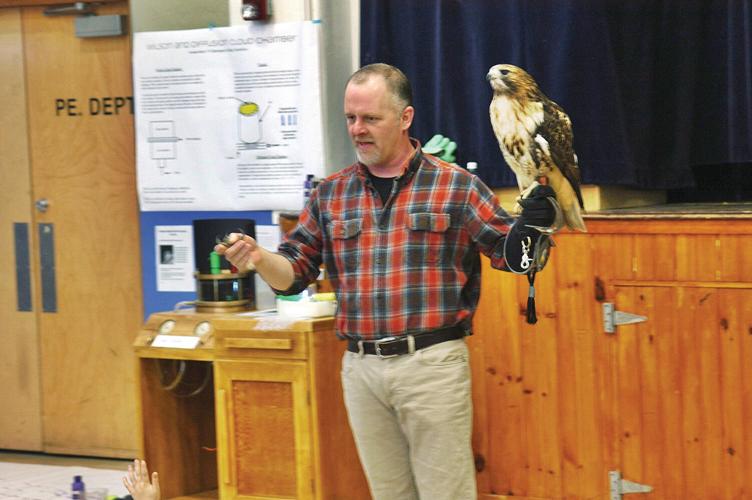 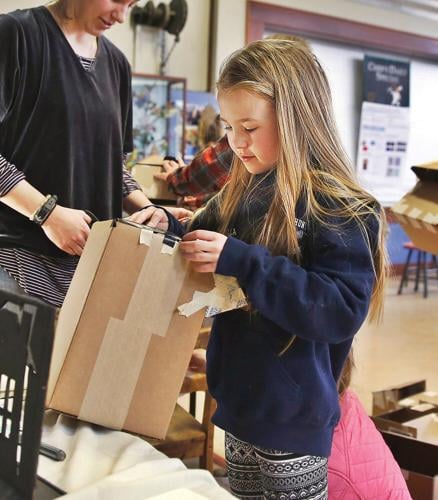 Isabella Moore, 8, of North Bennington, looks through a pinhole camera on Wednesday during an optics and camera-making workshop at the Village School of North Bennington. The workshop was part of a seven-day pop-up science playhouse called Scientificus. 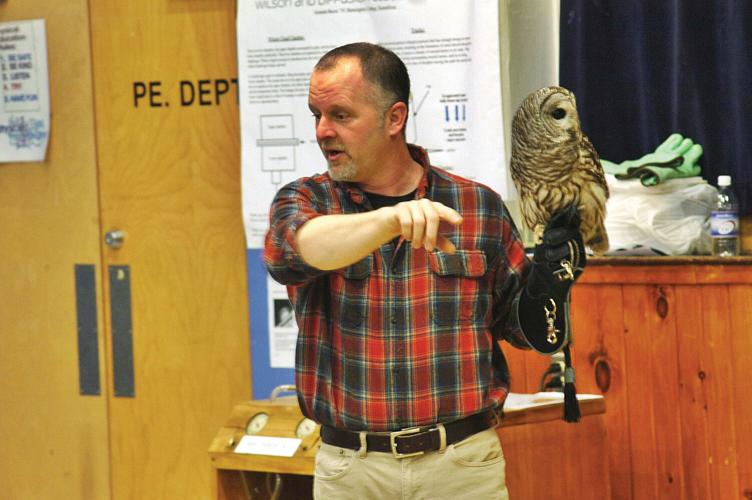 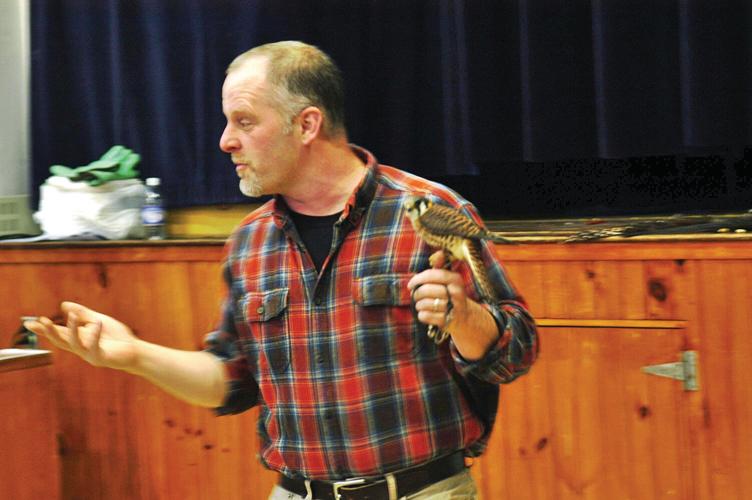 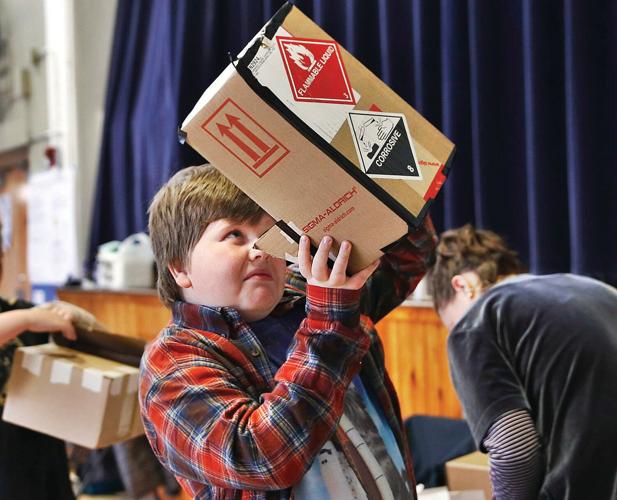 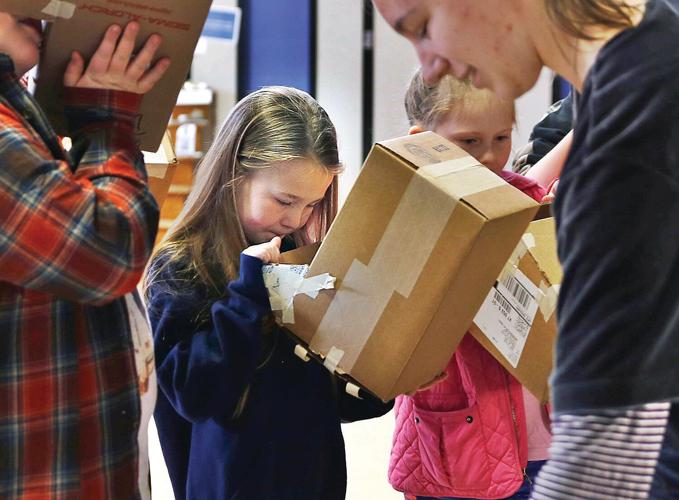 Children gather together to learn about the science behind how a camera works on Wednesday morning at a workshop at the Village School of North Bennington. From left to right are Laney Rogers, 7; Taylor Lampron, 11; Riley Lampron, 10; and teacher Josie Burnell, a junior at Bennington College.

Taylor Lampron, 11, of North Bennington, looks through a pinhole camera on Wednesday during an optics and camera-making workshop at the Village School of North Bennington. The workshop was part of a seven-day pop-up science playhouse called Scientificus.

Isabella Moore, 8, of North Bennington, looks through a pinhole camera on Wednesday during an optics and camera-making workshop at the Village School of North Bennington. The workshop was part of a seven-day pop-up science playhouse called Scientificus.

NORTH BENNINGTON — A group of students from Bennington College is making sure that even though it's school vacation week, learning can still happen.

"Our goal is to engage young students, parents, community members, and members of the college in working with science differently. Each of us has made an interactive exhibit based around our own advanced research, sharing what we find most interesting and how we think about it," the group said in a release.

There are also off-site events. On Thursday, Bennington College's Stickley Observatory will be open to the public starting at 8 p.m. and on Friday, "Beer Science" will take place at Harvest Brewing on South Street in Bennington at 8 p.m.

Earlier in the week, there were additional puppet shows, a plant drawing and raffle, a Live Raptor Talk with Michael Clough from the Southern Vermont Natural History Museum, and an optics and camera-making workshop lead by Bunnell.

One of the primary goals of the event was taking college-level science research and making it accessible for everyone.

"By taking content from our advanced work or research and crafting thought-provoking, playable material, we hope to make it accessible to anyone without 'advanced' science education," said organizers. "We add to this our own way of understanding the work and highlighting what we find interesting. Building off of our natural inclination to question, touch, and explore, we challenge ourselves to share what we find difficult and intriguing in hands-on ways while giving insight into the so-seeming enigmatic background. Drawing from model science, art and educational organizations, we add our enthusiasm, personal research and crafty minds; believing that one who approaches scientific material in an open, curious and playful way will gain insight into the wonder, beauty and brilliance of science and mathematics."

Crawford, the project's lead organizer, said that she was inspired to create Scientificus after three Bennington College seniors hosted a game night based on their research three years ago. "This excited me, and I began to think about how I could work out a similar idea but wanted to nudge up the scale. At the start of this school year, I asked a group of 12 juniors and seniors each studying in different areas of science and math to join me in making science playable," she said.

During her winter work field term, Crawford visited a series of large and small museums, galleries, and conferences all over the country, to see how they approach the issue.

"Using the game night as fodder, and the myriad of presentation environments I saw over the winter, we began to narrow down what we wanted from Scientificus," she said.

"We wanted exhibits which could be interesting at any level from the tiny hands to experts in their fields. We wanted a variety of presentation styles — technical posters to interactive instruction, invited expert talks to library reading resources, etc. It was important to us to involve a wider Bennington community. We wanted to share our understanding of science, particularly in the current climate of science and politics. To us, the sciences are fields where we can investigate our curiosities, answering one question by asking fifty more and discover beautiful unknowns."

One of the event's supporters was the Marlboro-based Southern Vermont Natural History Museum. In addition to Clough's raptor presentation, the museum provided a sampling of its collection of more than 250 species of taxidermy animals, the largest in Vermont, for a display for the event.

The theme of Clough's talk was the changing physical and legal landscape of Vermont, and how it has affected raptor populations. While the program had plenty of jokes (and of course live birds) to keep the younger kids entertained, the topic of conversation kept the adults engaged as well, discussing how during the colonial era, as more and more of the state became clear-cut, red-tailed hawks, which prefer open fields, moved into the state. However, a state-sponsored bounty system on the birds kept their population in check, until those laws were repealed after studies showed that the hawks ate pests that were more damaging to farmers' crops than the hawks themselves. Kestrels, which also need open spaces to hunt, have also seen their population drop as Vermont becomes re-forested.

Clough brought along a red-tailed hawk, a kestrel, a screech owl, and a barred owl. When introducing the kestrel, he brought up its cousin, the peregrine falcon, which can dive at speeds of up to 200 m.p.h. Clough asked the younger students, based on that, what they thought the falcon eats.

"That crazy dive doesn't work if you're hitting something on the ground," remarked Clough. "They can do it, but they can only do it once. No, falcons are bird-eaters."

All of the animals at the museum are there because of some impairment that prevents them from living in the wild. In the kestrel's case, he said, "This bird's problem doesn't have anything to do with her body. Physically, she's 100 percent. This bird has mental problems, called imprinting." He said the bird had imprinted itself on humans, so it would be unable to survive outside. "It's our saddest impairment, because she could be a kestrel, she just doesn't know how."

Other organizations the supported the event include Bennington College, the Village School, the Village of North Bennington, the Vermont Arts Exchange, the Bennington Seed Library and the New York State Museum.