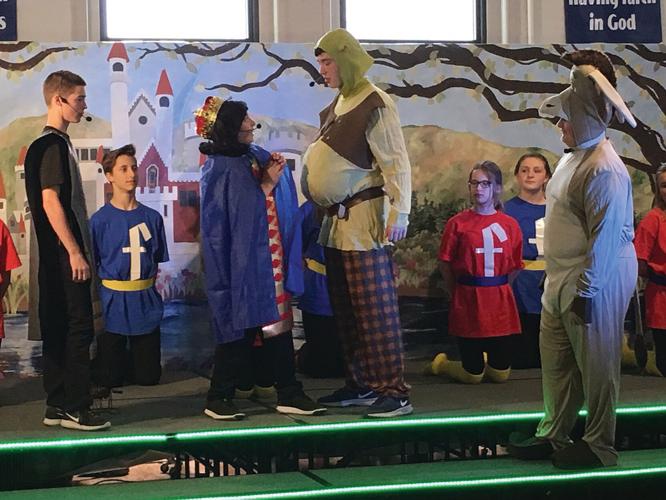 Shrek (played by Noah Diedrich) attempts to intimidate Lord Farquaad (played by Aiden Moscarello) during a dress rehearsal on Tuesday. 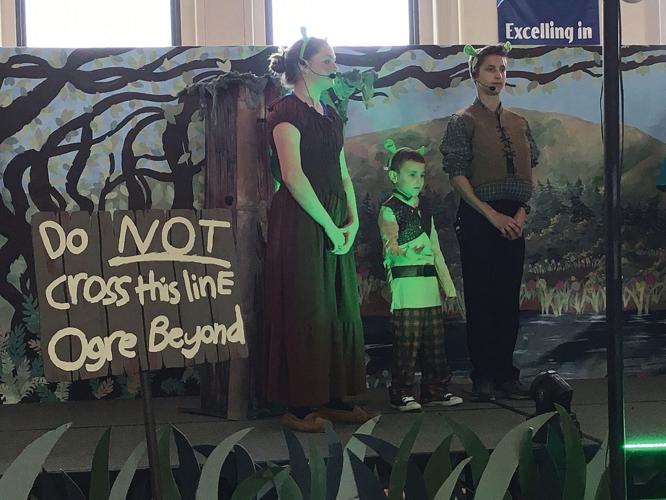 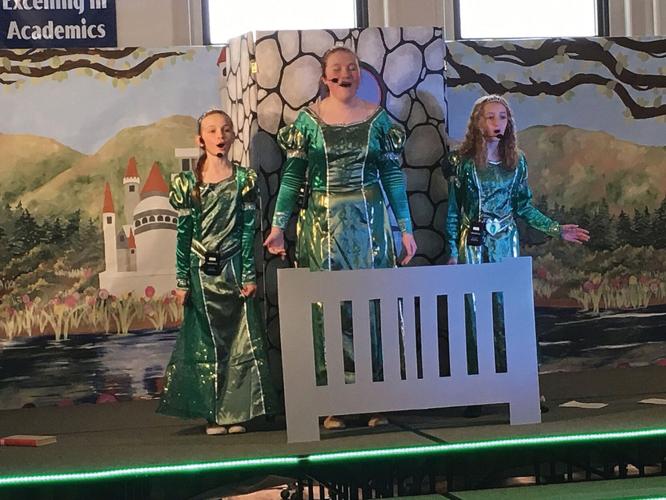 From left to right, young (Gidget Holden), adult (Mollie Clark), and teenage (Gabriella Giorgi) Fiona sing together about a lifetime of dreaming of princes.

Shrek (played by Noah Diedrich) attempts to intimidate Lord Farquaad (played by Aiden Moscarello) during a dress rehearsal on Tuesday.

From left to right, young (Gidget Holden), adult (Mollie Clark), and teenage (Gabriella Giorgi) Fiona sing together about a lifetime of dreaming of princes.

BENNINGTON — The School of Sacred Heart St. Francis de Sales has been transformed into a fairy tale kingdom this week for "Shrek the Musical."

The middle school students will present four showings of the musical, based on the 2001 DreamWorks animated movie, which in turn was based on William Stieg's 1990 children's book, "Shrek!." The book and lyrics were written by David Lindsay-Abaire and the music was written by Jeanine Tesori. The musical is presented through a partnership with Music Theatre International, which provides "Junior" versions of musicals for elementary and middle school-aged performers.

The story, a parody of the fairy tale genre, follows Shrek, an ogre who goes on a quest to rescue Princess Fiona from her dragon-guarded tower in order to convince the evil Lord Farquaad to remove the fairy tale characters who have been banished to Shrek's previously peaceful swamp. Shrek is joined in his quest by his comedic side-kick, Donkey.

The three main leads are split-cast, with Logan Broderson and Noah Diedrich playing Shrek, Nikolas Segura and Rainey Dumas playing Donkey, and Sloane Rivers and Mollie Clark playing Fiona. The dragon is played by Madison Hopkins and Lord Farquaad is played by Aiden Moscarello. In total, 53 students are involved in the performance.

The show was produced by Principal David Estes and choreographed by Kristi Segura. Middle School art teacher Crystal Harris, with the assistance of her students, designed the sets.

This is the latest in the school's series of annual spring musicals. Last year the students performed "Bye Bye Birdie," and in recent years have also performed "The Lion King," and "Willy Wonka and the Chocolate Factory."