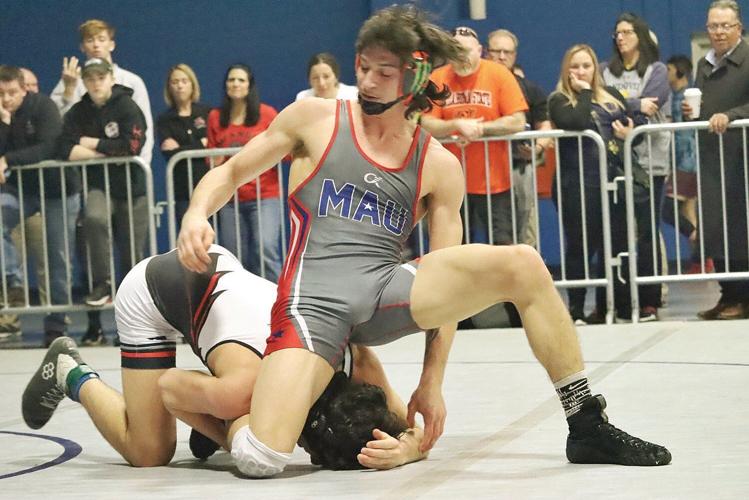 Stephen Brillon looks for the advantage during a match on Sunday. Brillon finished one match short of placing in the 152-pound weight class. 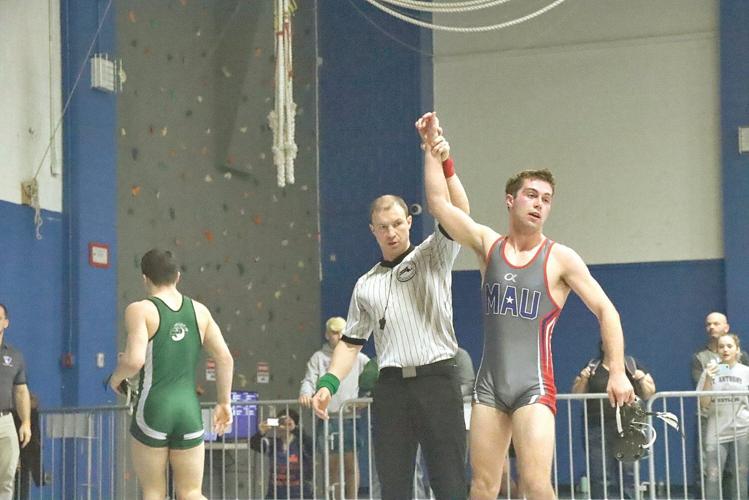 Mount Anthony's Keegan Coon has his hand raised after winning in his placement match on Sunday afternoon. Coon ended up placing fourth, his third top-six finish of his career. 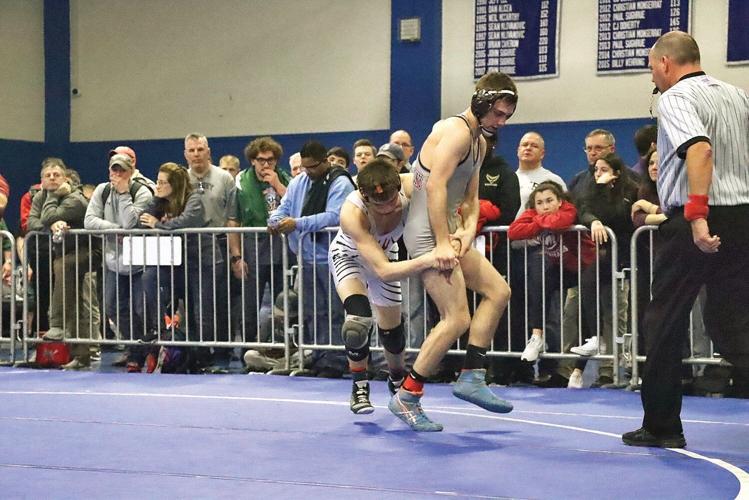 Keegan Coon tries to escape during his third-place match on Sunday at the New England championships. Coon finished fourth overall, his third time placing at the regional. 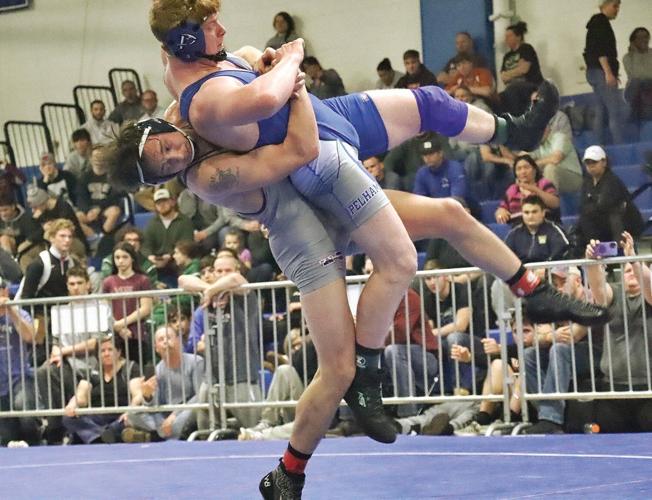 Mount Anthony's Sam Wilkins returns his opponent, Conor Maslanek, from Pelham, N.H., to the mat in the 195-pound final on Sunday. Wilkins won 3-2 in the ultimate tie breaker and claimed his second New England championship. 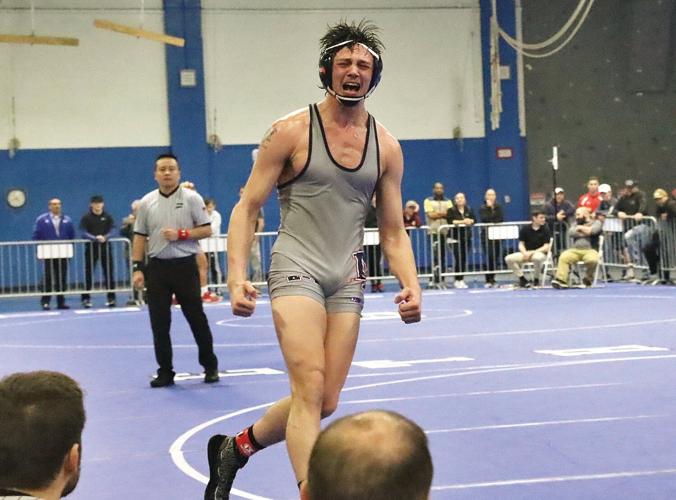 Stephen Brillon looks for the advantage during a match on Sunday. Brillon finished one match short of placing in the 152-pound weight class.

Mount Anthony's Keegan Coon has his hand raised after winning in his placement match on Sunday afternoon. Coon ended up placing fourth, his third top-six finish of his career.

Keegan Coon tries to escape during his third-place match on Sunday at the New England championships. Coon finished fourth overall, his third time placing at the regional.

Mount Anthony's Sam Wilkins returns his opponent, Conor Maslanek, from Pelham, N.H., to the mat in the 195-pound final on Sunday. Wilkins won 3-2 in the ultimate tie breaker and claimed his second New England championship.

But Wilkins had the choice in the ultimate tie-breaker and immediately, he gave coach Brian Coon a slight smile.

"We had a different game-plan but it ended up working out for us anyway," Wilkins said. "When we took down [position], I knew I'd be able to get out within the 30 seconds, he hadn't been able to hold me down the entire match. He was out of gas, winded and I was feeling it."

Wilkins became a two-time regional champion with a 3-2 overtime win over Maslanek.

"We knew it was going to be that kind of match," said MAU coach Brian Coon. "That's his style, he's hard to score on, he's strong. He slows the matches down which is to his advantage. It would take motion and pace to beat him."

Both wrestlers were called for stalling early on, keeping both on their toes the rest of the match. Wilkins worked an escape in the second period, while Maslanek got one in the third, sending the match to sudden victory. Neither guy scored, and they moved on to the tiebreaker. Wilkins struck first with an escape before Maslanek did the same in his 30 seconds.

"He had to try right away [with the early stall warning]," Coon said. "[Maslanek] knew he'd have to cut Sam, give up just one [point]. His confidence started to go away and that's when Sam usually shines."

Thanks to Maslanek's deferring his choice to the third period of how to start — neutral, top or down — Wilkins got the first choice in the overtime. He exploded at the whistle and left the Pelham junior in the dust, kicking away to earn the escape and the title.

"I had a game-plan coming in and it's worked for me all weekend," Wilkins said. "My conditioning won out, it shows how my coaches and teammates push me. You don't realize [until the end] how much really goes into it."

"I'm glad Sam got the first point [in the match], that's how even that match was," Coon said.

After the match, Wilkins, who has been taught in the ways of "acting like he'd been there before," had a moment of pure joy and celebration.

"I couldn't help myself, I had to jump right up and yell," Wilkins said.

Wilkins is one of only a few wrestlers in Mount Anthony history to win a pair of New England titles. The list is a who's who of MAU wrestlers over the years — Troy Gassaway, Jesse Webb, Rob LaBrake, Corey Greene, Ben Lackey, Steve Forrest and John Bushee. Rafael Vega is the only 3-time champion, immediately inducted into the New England Hall of Fame.

"It's awesome, it's a great competition," Wilkins said a few minutes after the match. "You never know how this tournament is going to go, there's such great wrestlers and sometimes you can pull it out. It's crazy right now."

Wilkins' victory helped the Patriots to a fourth-place team finish, only behind Danbury, Conn., Essex and Bishop Hendricken, R.I.

"I don't know if we performed the way we can, we had guys that could have placed or won more matches," Wilkins said. "The younger guys see what it takes, they have time."

Keegan Coon ended his high school career with a fourth-place finish and earned his third top-6 showing at the regional championships, after a fifth-place finish as a junior and a sixth-place as a sophomore.

In his placement match against Newport, N.H.'s Josh Sharron, Coon trailed 4-0 after the first period, but came back to make it 4-2 going into the third. Coon tied the match with a takedown, but Sharron finished off a 6-4 win.

"I thought Keegan wrestled great, he gave himself a chance to win every match," Coon said.

To get there, Coon had to win his first match on Sunday, which he did in a 10-2 major decision over Cumberland, R.I.'s Mason Lynch. The next match would determine who would wrestle for third and who would go for fifth, and Coon was taken to the limit against New Milford, Conn.'s Khalil Bourjelli, but prevailed 6-5.

"After he was beaten, I didn't know if he'd be able to bounce back," Coon said. "You train your whole life to become a New England champ and to recover and win 30 or 40 minutes later speaks to his character. To place [three years in a row] is a credit to him."

"He wrestled awesome and he was so close to placing," Coon said.

Essex finished second overall, its first top-10 finish as a team since a seventh-place finish in 2001. It's also the highest finish for a Vermont school not named Mount Anthony since Spaulding won in 1995.

It added up to three New England champions for Vermont a year after the Green Mountain State was shutout.

"They've been our rivals my whole time and to see them cheering for us and us cheering for them is huge," Wilkins said. "It shows how strong Vermont wrestling has become and we should be proud of it."