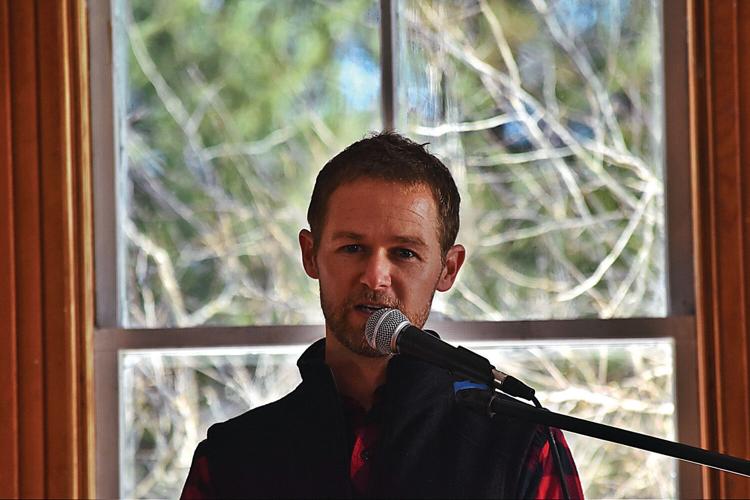 Shaftsbury farmer Brad Peacock announces his candidacy for the U.S. Senate at the Shaftsbury community center. 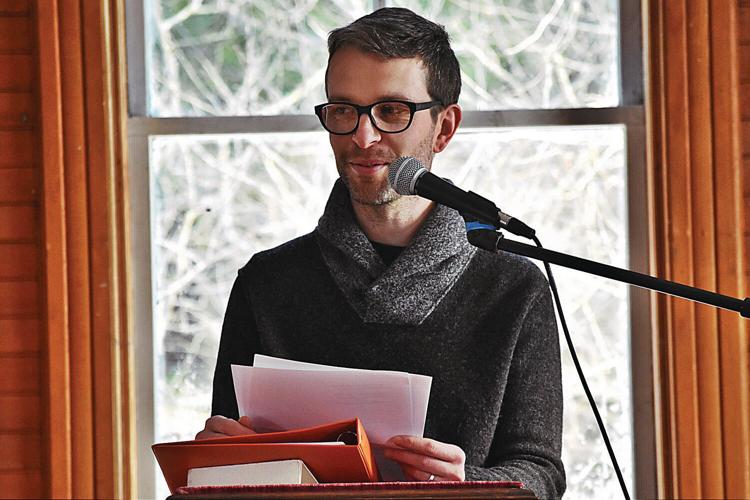 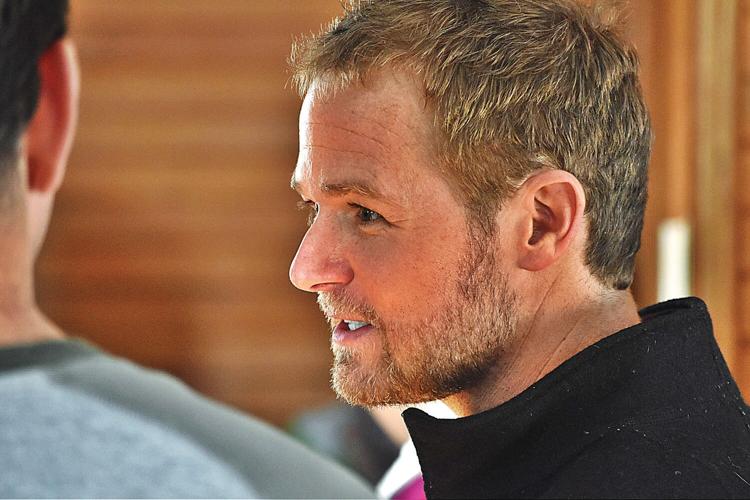 Shaftsbury farmer Brad Peacock speaks with audience members after announcing his candidacy for the U.S. Senate.

Shaftsbury farmer Brad Peacock announces his candidacy for the U.S. Senate at the Shaftsbury community center.

Shaftsbury farmer Brad Peacock speaks with audience members after announcing his candidacy for the U.S. Senate.

MANCHESTER — Brad Peacock has served his country once, and on Sunday the Shaftsbury farmer announced that he hopes to do so once again — this time in the United States Senate.

Running on an independent ticket, Peacock, is vying for the seat currently held by 2016 presidential candidate Bernie Sanders. Still, Peacock views his candidacy as a continuation of Sanders' legacy rather than a challenge to it, hoping that the senator will once again aim for the Oval Office in 2020.

In the hour-long speech outlining his platform, Peacock, who is seeking political office for the first time, used personal experience to illustrate his positions on poverty, health care, climate change, and civil rights. Throughout his address, the candidate emphasized community reliance and connection in the face of adversity.

"I speak to you now as a young Vermont farmer with a story to tell," said Peacock, an employee of Shaftsbury's Clear Brook Farm. "I am here to be vulnerable, and to speak truth to power."

Peacock decried what he describes as a Republican attack on "our most vulnerable" citizens, including seniors, children, and the poor. That attack becomes even more troubling, he says, in the face of "corporate welfare" including tax breaks and loopholes for corporations and the wealthy.

The candidate cited the recently passed republican tax plan as a prime example, and voiced his desire to eliminate those corporate tax breaks.

"What loyalty did corporations show to small town America when they globalized and started closing down factories and mills, abandoning entire communities to ship our jobs overseas? Did corporations care about the people when they came in and polluted our land, air and waterways?" he asked. "Just look at North Bennington and Hoosick Falls, and the chemicals that corporations leaked into our groundwater and environment."

The candidate also voiced his support for a $15 minimum wage. Having benefited from programs like the Supplemental Nutrition Assistance Program (SNAP) in his youth, the candidate views these programs as an investment in local communities.

"Whether for food, fuel, or rent, I know the vast majority of citizens needing assistance are not looking for a hand out, but rather are seeking a hand up," Peacock said. "It's time we rethink taxes as investments in our country's future."

Recalling a cold winter's night spent huddled around his family's oven as a child, Peacock points to his mother's tenacity and positivity as an inspiring act of "ordinary heroism." Despite financial barriers, Peacock says that programs often categorized as "handouts" played a role in the upward mobility he later achieved.

"I would like to take this opportunity to thank every taxpayer in this state and country that invested in my family's well being when we fell on hard times," he said. "This is one reason I feel called to public service, because I am a direct result of the generosity of millions of Americans who helped to lift my family up when we were down."

Peacock also spoke out against Republican attempts to upend the Affordable Care Act, and the lack of funding provided for the Children's Health Insurance Program (CHIP) in the tax bill. The candidate also voiced his support for universal health care.

"At 10 years old I was keenly aware that any extra cost to our household would mean added stress and hardship," Peacock said. "When I started to have a sore throat I remained silent, hoping it would go away. After a week or two it eventually did, but what I didn't realize is strep throat, left untreated, can attack other organs."

After continually growing weaker, Peacock was in dire straits by the time he was brought to the emergency room. The virus had attacked his kidneys, he said, causing lasting damage.

"Through all this, I worried I had done something wrong; I worried I had brought hardship on my family," he said. "I am standing here today to say: no child in America should ever have to bear the worry of healthcare costs, and no parent should have to watch their child suffer in sickness with the added stress of how they will pay for treatment."

Once again drawing on personal experience, Peacock also cited climate change as a source of hardship for Vermont communities. Unpredictable weather patterns have already begun to have an impact on our local food systems, he said, and will likely impact industries like outdoor recreation as tick-borne illnesses become increasingly prevalent.

"Growing up here and working the land I have been on the front lines of climate change, which continues to have real-life consequences not only for my livelihood, but also for the future of our economy," he said. "I have witnessed this from the erosion in our fields, to the insects and diseases that have exploded over this past decade, making it harder and harder to farm without the use of fungicides and pesticides."

The audience was perhaps most stirred, however, when Peacock detailed his service — and later discharge — from the U.S. military.

At 18, Peacock explained that his family's financial situation meant that college "was not an option." Following a long family history in the military, the candidate enlisted at age 18 and went on to earn a security forces education. Though he built a new family in the military, he says, the need to hide his true identity resulted in a deep depression.

"I came out as a gay soldier, and the reaction was swift," Peacock said. "Because of the disastrous policy of Don't Ask, Don't Tell, a policy cloaked in discrimination, I was released from the military for being gay, though they labeled it an `anti-social personality disorder.'"

Due to his discharge Peacock was no longer eligible for G.I. Bill benefits, and he returned home carrying the burden of shame alongside him. Though he wrestled with suicide following his service, he says it was his community that lifted him back up.

"After 18 years of carrying around this pain, I am here to speak out to ensure no trans soldier will end their life because they feel rejected by this government," Peacock said, decrying President Trump's recent attempts to ban transgender service members. "I will not sit by to watch this disgraceful, disqualifying discrimination happen again. Lives are at stake."

Peacock reiterated his commitment to Vermont communities, and noted that he will be traveling across the state for a number of community meals leading up to the 2018 election.

"I attempted to serve my country once and was denied that honor by the government I swore to protect," Peacock said. "Now, I would like to finish my service to this state and to this country with the people I trust, the people of Vermont by my side. Today I am announcing my candidacy for the United States Senate."

Reach Cherise Madigan at cmadigan@manchesterjournal.com, or by phone at 802-490-6471.