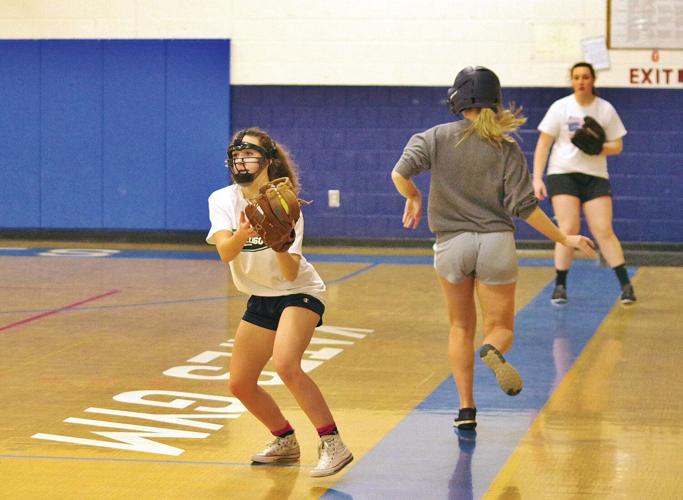 Rachael Jones takes a throw at first base during practice on Friday as Ashlee Billert backs up. 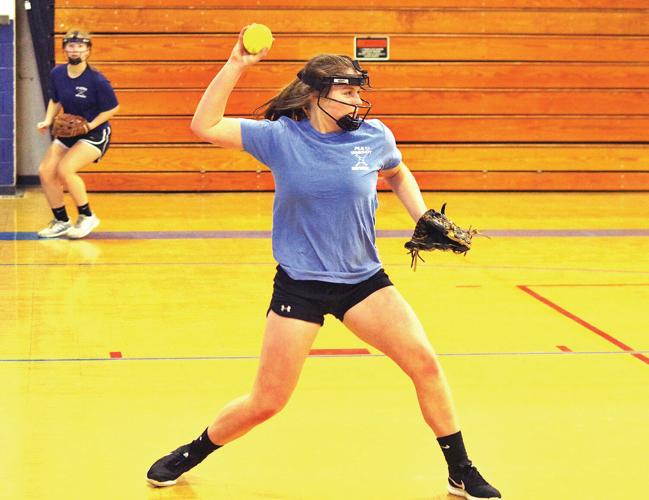 Mount Anthony's Emilie O'Brien throws the ball to first during practice on Friday. 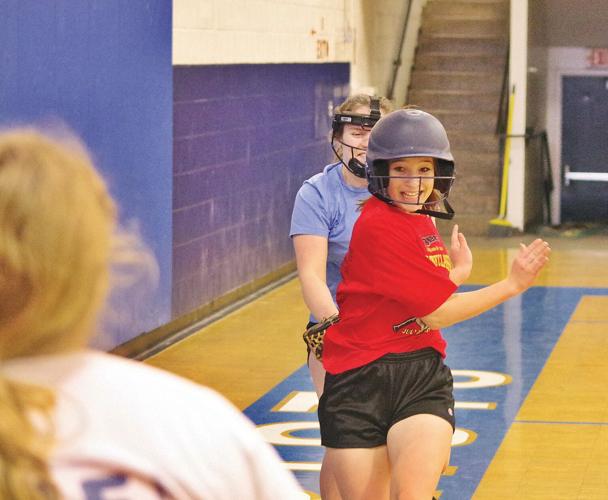 Keana Gauthier tries to avoid a tag during Friday's practice.

Rachael Jones takes a throw at first base during practice on Friday as Ashlee Billert backs up.

Mount Anthony's Emilie O'Brien throws the ball to first during practice on Friday.

Keana Gauthier tries to avoid a tag during Friday's practice.

BENNINGTON — The Mount Anthony softball team is in some rarified air coming into the 2018 season.

They are looking for their fifth Finals appearance in a row, and their fourth championship in five years — a record matched only by BFA-St. Albans in the history of the Division I tournament.

They beat Essex in a eighth-inning walk-off for the title to finish off a 17-1 season in 2017 and coach Katie Contrada is aware that her team, as defending champions, will get everyone's best shot.

"Each year of the past few, every team has been special and unique and had its different strengths," Contrada said. "One thing I can say for all of them, they are coming to work hard every day and they know they have the target on their back. But in a way, it makes them want to work hard even more just so you can be a part of it and continue to make MAU softball an amazing program."

Dicranian will be in the circle for the fourth year in a row.

"The entire senior class has been with our program since the very beginning, so we're really fortunate to have this group of seniors, it's a special group of girls," Contrada said. "Taylor is a gamer on the mound, always comes to work hard and leave it all on the field. She's a great role model for younger kids. She's worked all winter and fall for this particular season to be a leader on the team."

Boyle has been the starting catcher for the past three years and one of the top hitters by average.

"She's does anything you ask her to do, leads by example on and off the field," Contrada said. "We're lucky to have a talented catcher, it's one of the most important positions on the field."

O'Brien is another four-year starter.

"She's a natural first baseman and she can get anything [thrown her way]," Contrada said. "She has the right demeanor to be a first baseman, she knows exactly where the play should go. At the plate, she's steady and composed and puts the ball in play."

Gauthier will lead the outfielders as the center fielder again as well.

Billert played third base in the past, but will be in right this year.

"She's versatile and has probably one of the hardest throws I've ever seen," Contrada said. "She worked her way from being a bench player to a starter and she put in the time to improve and it shows. She's worked hard to earn that position."

Junior Cat Worthington will play at shortshop and probably hit third in the lineup, while sophomores Rachael Jones and Keana Gauthier will revive their roles for last season, Jones at second base and Gauthier in left field.

"Cat owns it at short and makes the tough plays look easy," Contrada said. "And Rachael is so fast, has quick hands and feet and can turn a double play like it's nobody's business. Keana gives us a strong presence in left field as well."

Sophomore Emilie O'Brien will be at third base and will be the second pitcher.

"Emilie is one of the best athletes I've seen come through," said assistant coach Brooke Remington. "She's versatile and has a great swing at the plate. She's all-in to what we're doing."

Sophomore Erin Farrell and junior Alison Simmons will also come off the bench. Farrell will play in the outfield, while Simmons will be a utility player.

The Patriots have freshman Danielle Moscarello at the varsity level as well, the lone ninth-grader to make the squad.

"She's got a good arm and she's super fast," said Remington, who said Moscarello will play in the infield. "We're excited that she's going to be a part of it. She's earned it and she's got what it takes."

Senior Maddisyn Kinney and junior Jaiden Guetti are both managers, while Kinney can come off the bench as a courtesy runner.

"I think that one of our major strengths is team chemistry, and that while every individual player is talented, they understand that the sum of the parts is more important than the individual pieces," Contrada said. "Each of the girls understands their role and how they can support one another. When you get into intense games and pressure situations, having those relationships can be crucial because everyone knows they have each other's backs. Starting a season with team chemistry like that is really a good foot to be on at this point."

"Tim [Brown, the athletic director] got us some great non-league competition in Massachusetts. It preps us for the tough northern teams that we play. It's always a game to be ready for," Remington said.

Remington said that as much success as the team and program have had, there's no expectation they can just walk in and win another title.

"They are hard workers and there's something to be said for not resting on your laurels," Remington said. "It's not how they roll."