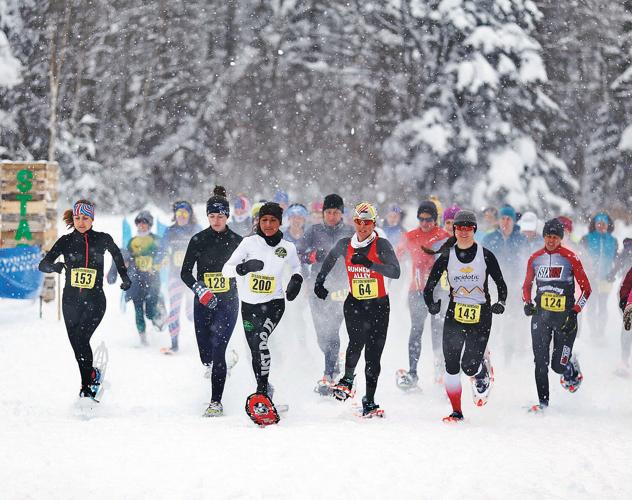 Women take to the packed trails of the Prospect Mountain ski area in Woodford at the Senior Women's 10km U.S. National Snowshoe Championship on Saturday. 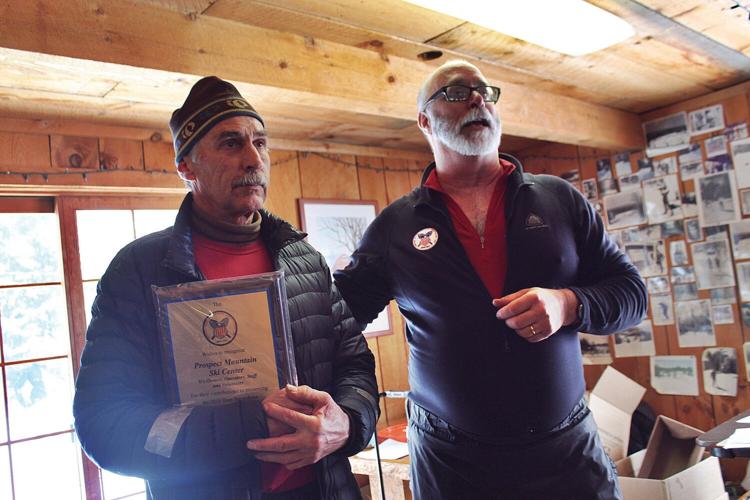 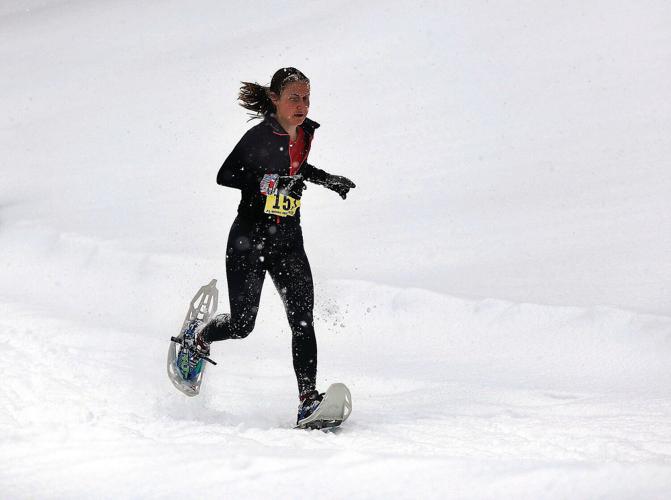 Michelle Hummel, of Albuquerque, New Mexico, on her way to a first-place finish in the Senior Women's 10km National Snowshoe Championship at Prospect Mountain ski area on Saturday. 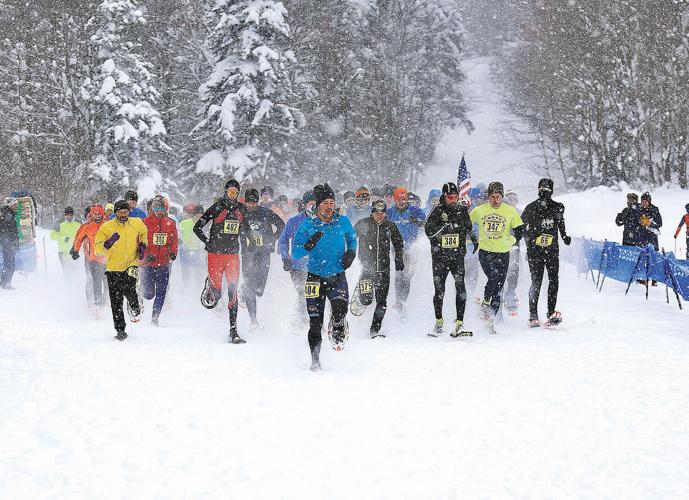 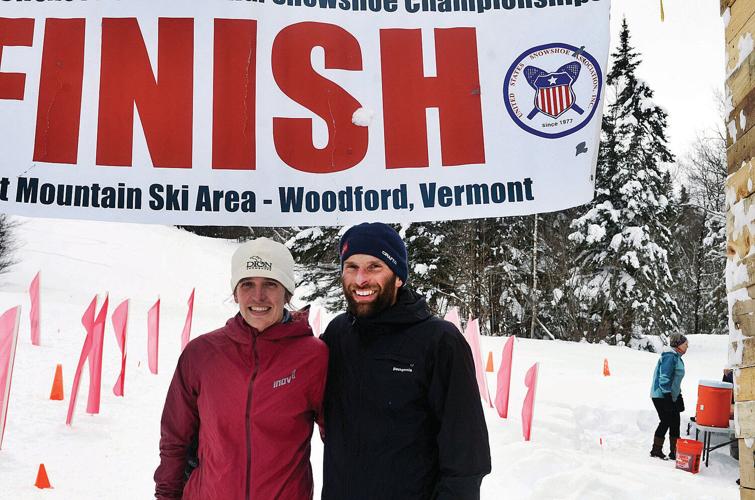 Amy and Brian Rusiecki, of South Deerfield, Massachusetts., were the male and female marathon champions at the U.S. National Snowshoe Championships at Prospect Mountain in Woodford Sunday morning.

Women take to the packed trails of the Prospect Mountain ski area in Woodford at the Senior Women's 10km U.S. National Snowshoe Championship on Saturday.

Michelle Hummel, of Albuquerque, New Mexico, on her way to a first-place finish in the Senior Women's 10km National Snowshoe Championship at Prospect Mountain ski area on Saturday.

Amy and Brian Rusiecki, of South Deerfield, Massachusetts., were the male and female marathon champions at the U.S. National Snowshoe Championships at Prospect Mountain in Woodford Sunday morning.

WOODFORD — Between snow-covered trees on the hills of Prospect Mountain, snowshoers maneuvered through snowy terrain, pushing to make the quickest time possible.

The 18th annual U.S. National Snowshoe Championship was held on Prospect Mountain Ski Area this past weekend, drawing in athletes from across the nation and even some from as far as Ecuador. It was presented by Dion Snowshoes of North Bennington.

According to race organizer Tim Van Orden, the 300-plus participants made this the second-largest U.S. National Snowshoe Championships ever held. Van Orden said 287 pre-registered for the championship and more registered throughout the weekend. Over 50 people were estimated to have volunteered for the event.

The largest championship was also held in Woodford, in 2014. It was the success of that event, which drew more than 400 athletes, that led the U.S. Snowshoe Association to return this year.

The three-day event drew in top snowshoe racers and activities for those of all ages and experience levels. Participants could register for a chance to run in a junior 5K, a men's and women's, the Woodford Wonderfest 5K citizens' race; a marathon and half marathon, and a relay race. There was a Kid's Kilo run/walk event, too.

Husband and wife Brian and Amy Rusiecki, of South Deerfield, Massachusetts, took first place in the men and women's marathon, held on Sunday. The couple has been snowshoeing for about ten years; they said it serves as a fun wintertime activity that allows them to embrace the cold weather rather than fight it.

"We run a lot of ultramarathons, and running a snowshoe marathon is kind of similar to running a 50K [31 miles] in terms of effort," Amy Rusiecki said. "For us, this is really an early-season tune-up for other things to come."

The weight of the snow on the snowshoes helps strengthen legs, which assists in getting the runners ready for another season, she said. She has been cross-country skiing in the Green Mountains throughout her life, and has family from the area.

"[The trail] was really pretty," she said. "I'm glad that [Tim] wove in a lot of the single tracks, so you just kind of weave in through the trees and have a lot of fun out there."

Steve Adams of Annapolis, Maryland, took first place for men in the Citizens' Race and Elena Betke-Brunswick of Florence, Massachusetts, was first among women.

A total of 15 teams participated for Sunday's relay race with half of the registrants coming from the local area to the other half coming from outside of the area.

Kathy Zemianek participated in the relay with a team of her fellow teachers and staff members from Shaftsbury Elementary School. The team decided to participate in the race for a fun winter time challenge. One of her teammates remarked that the course was easier than she thought it was going to be.

"I run regularly, but not snowshoe," Zemianek said. "It's very different. It's certainly more challenging. It was a tough course, but it's so much fun."

She said her favorite part of participating in the race was being in the woods surrounded by the snow-covered scenery as she traveled across the single tracks.

William Litzer traveled from Marathon, Wisconsin, to Southern Vermont to participate in the Senior Men's National Snowshoe Championships. He participated in six races this season before he embarked on his Saturday run, and has been running since the early 2000s — it was his first time racing in the Northeast.

Litzer said that training for snowshoeing races is all dependent upon whichever type of terrain you decide to run on, and that athletes practice by running a certain amount of miles a week.

"Everyone was telling me about the snow, and I'll take any challenge I can get. It's just like cross country, you take what you get," he said.

When it comes to snowshoeing, he likes the different aspects, from the competitiveness to the community feeling that it evokes in others.

Weather was said to have had an impact on the turnout, as people weren't sure what conditions would be like on the competition weekend, Van Orden said. Some people didn't want to commit just in case there wasn't enough snow for the races.

Van Orden had to keep changing the trail layouts due to weather concerns, especially after Woodford received three feet of snow this past week. Trails had to be carved out for each race.

There were some concerns about having to cancel the event due to the large volume of snow in the area. At first, Van Orden worked alone to get the trails ready for snowshoers, spending about four hours working per mile. When he posted a video on Facebook on Thursday evening of the deep snow to ask for assistance, volunteers traveled to Prospect to give him a hand.

"It was hard," Van Orden said. "It was harder than any race I've ever done."

The Bennington Highway Department also responded to Van Orden's call for help, sending up plows and other equipment to clear out the ski area's parking lot, Steve Whitman, the co-owner of Prospect Mountain, said.

"I think it wasn't until Saturday morning that we got all of the trails open," he said. Each of the trails had to be snowshoed before the races took place to ensure that it was fair for the first participants as they trekked through the area.

Bob Dion, of Dion Snowshoes, said he was happy with the number of turnouts that the competition had — especially with the way the weather has been this past winter. The company has been a sponsor for roughly the past ten years.

He said Dion brought about 60 pairs of snowshoes for rental, and that most of them had been used.

"At the awards yesterday there was so many local people that won medals that weren't there because they didn't think they could get a medal in a championship. There's a lot of people in Williamstown and Bennington that are going to be getting medals from the championship."