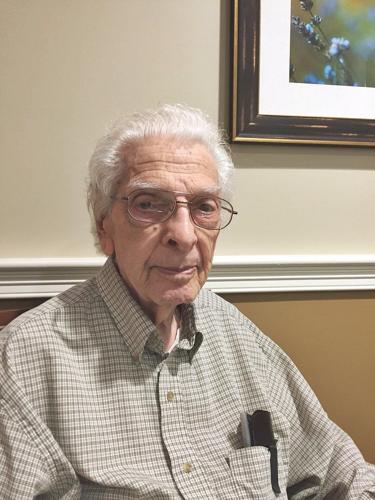 Jim Buccolo, 93, moved to a Bennington senior home in May after living in Sandgate for more than 20 years. This photo, taken Tuesday, shows him at the Brookdale Fillmore Pond senior living facility. 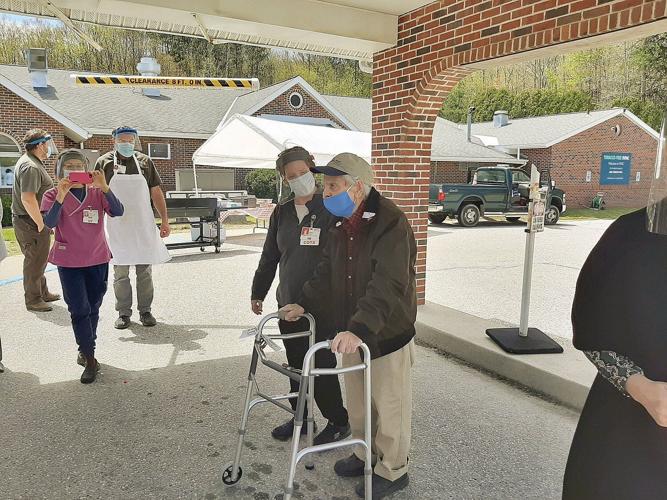 Jim Buccolo, 93, is shown leaving the Centers for Living and Rehabilitation in Bennington on May 14 after recovering from the COVID-19 coronavirus disease. He was treated at Southwestern Vermont Medical Center. 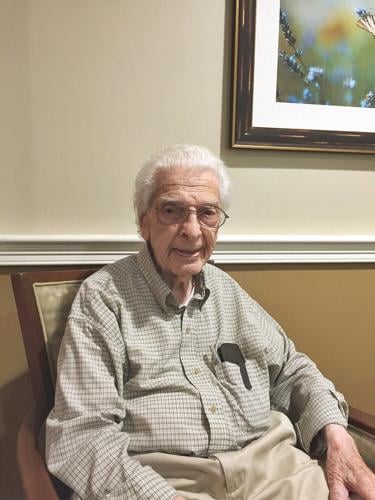 Jim Buccolo, 93, moved to a Bennington senior home in May after living in Sandgate for more than 20 years. He was born and raised in Brooklyn, N.Y., and had served in the Navy.

Jim Buccolo, 93, moved to a Bennington senior home in May after living in Sandgate for more than 20 years. This photo, taken Tuesday, shows him at the Brookdale Fillmore Pond senior living facility.

Jim Buccolo, 93, is shown leaving the Centers for Living and Rehabilitation in Bennington on May 14 after recovering from the COVID-19 coronavirus disease. He was treated at Southwestern Vermont Medical Center.

Jim Buccolo, 93, moved to a Bennington senior home in May after living in Sandgate for more than 20 years. He was born and raised in Brooklyn, N.Y., and had served in the Navy.

BENNINGTON — COVID-19 has made some people feel the sickest they've ever been: running a high fever with chills, along with headaches, fatigue, coughing, vomiting and trouble breathing. Jim Buccolo remembers having only a light fever and some coughing. He thought he just had a cold.

If he hadn't tested positive for the novel coronavirus, the 93-year-old Bennington County resident wouldn't have known he'd contracted the disease that has stricken millions of people, causing fear and anxiety worldwide.

"It was really very subdued," Buccolo said of his symptoms. "I didn't experience some of the trauma that some people did."

His recovery is notable given federal data that shows the largest number of COVID-19 deaths in the U.S. are among folks age 85 and over.

Buccolo, a longtime Sandgate resident, believes he caught the virus while being treated for a back injury at Southwestern Vermont Medical Center earlier this year. His COVID-19 symptoms apparently didn't show up till he had been transferred to the SVMC-affiliated Centers for Living and Rehabilitation for recovery from the back injury.

He tested positive for COVID-19 on April 7 and underwent treatment at SVMC.

Buccolo is among at least 1,100 Vermonters who have gotten infected since the state reported its first COVID-19 case in early March. More than 900 people have recovered, but 55 have died, according to Vermont health department data as of Thursday.

Worldwide, some 7.4 million have contracted the virus, named SARS-CoV-2. About 5 percent of the cases have been fatal, based on data from Johns Hopkins University's Coronavirus Resource Center.

Buccolo is now living at Brookdale Fillmore Pond, a senior facility in Bennington. Since moving there in mid-May, he has been unpacking and organizing his stuff. He downsized to a one-bedroom unit after having lived in a 10-room house in Sandgate for around 25 years.

One of his three daughters is helping him with the move, continually dropping off things at Brookdale's front door since the facility has been closed to outside visitors because of the pandemic.

"That should be enough to tell you that's kept me busy," he said in a video call last week. The strength in his voice could be mistaken for that of someone 20 years younger. He was also quick to remember dates, names and places.

Buccolo wonders if good genes might have helped him fight off the virus. At 93, he reports no major illness though he never had an exercise regimen or a special diet. Whatever physical activity he had came from being on his feet most of the day through decades as a product quality-control inspector and manager.

"All the vital organs seem to be in really good shape," he said.

At the same time, Buccolo said he quit smoking at around age 40 and was never a heavy drinker. He still has a beer or two now and then.

Born and raised in Brooklyn, N.Y., he had worked for various manufacturing companies in New York. He and his late wife Eleanor Buccolo moved from Queens, N.Y., to Sandgate after he retired in the mid-'90s. She passed away in 2006.

Before entering the manufacturing industry, he served in the Navy from 1945-49. A year later, he was recalled for 15 months during the Korean War.

One major reason he survived COVID-19, he said, was the quality of medical care he received in Bennington.

"I feel I owe a debt of gratitude to the hospital and CLR," he said. "The treatment in both facilities was extraordinary. I take my hat off to them."

A Roman Catholic, Buccolo said his faith also played a part in his recovery. He continued to say his nightly prayers while lying in his hospital bed. He said he believes the pandemic is meant to draw people back to God and to each other.

Buccolo still has a dozen boxes of belongings to sort through, but he knows what he definitely wants to keep: photos of his wife, his daughters, grandchildren and a son who passed away. A highlight of his day is receiving daily calls from family members.

"I'm very fortunate," he said of emerging from his bout with COVID-19. "No doubt about that."