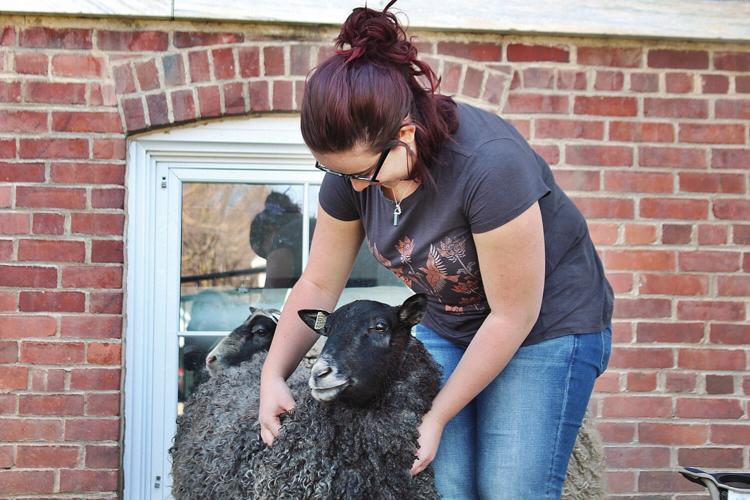 Emma Salazar, a junior at Bennington College, brought her family's sheep, Jasper and Katie-Lou, to participate in Saturday's installment of Scientificus for "Digestion Day." She and her mother explained how sheep digest food. 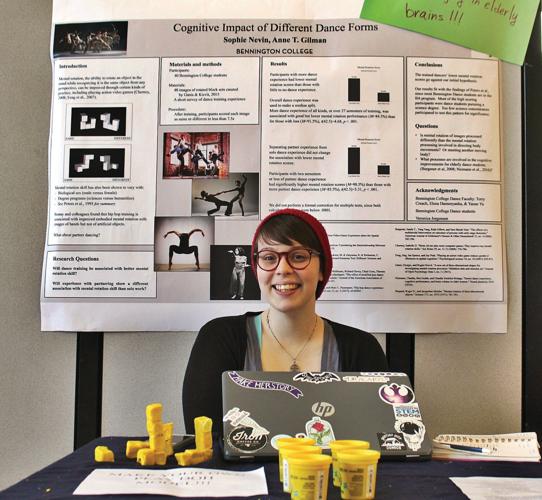 Sophie Nevin, who studies neurology and dance at Bennington College, focused her exhibit on research she did involving the two disciplines and how they work together.

Emma Salazar, a junior at Bennington College, brought her family's sheep, Jasper and Katie-Lou, to participate in Saturday's installment of Scientificus for "Digestion Day." She and her mother explained how sheep digest food.

Sophie Nevin, who studies neurology and dance at Bennington College, focused her exhibit on research she did involving the two disciplines and how they work together.

The interactive museum. open from Monday to Saturday, was meant to help engage children, parents, and community members with science. It offered attendees a chance to learn about different aspects of the discipline in a unique hands-on experience. Most portions were housed in the school's gymnasium, though some were offered outside, just beside the doors.

Scientificus was arranged by a group of 12 science and math students from Bennington College, all juniors and seniors. Each exhibit was based on advanced research that each of the students did in a specific area of interest, which made college-level scientific research accessible to all.

"What's fun is that [Scientificus] is geared towards children, but it's also this open level where parents will come and play and other community members," said Shana Crawford, one of the organizers. "We had a woman come in today and spend a few hours checking things out — everyone has been really interested."

Digestion Day started off as a bit of a joke between the students before they thought seriously about incorporating it into the event, Crawford said. As time went on, they decided to include it to help teach about how food is digested and the different ways in which animals do it.

It also acted as a way to introduce children to animals that they might not be as familiar with. They learned that snakes can't be touched when they're digesting, as they're putting all of their energy into breaking down their food, and that sheep have four different stomachs, Crawford said. Facts like these helped visitors contextualize and piece together the processes as they watched.

Attendees had the opportunity to go into the sheep pen and pet the two Gotland sheep - both of which were happy to be receiving so much attention, especially a black sheep named Jasper.

Jasper and the other sheep, Katie-Lou, were brought to the school by Bennington College student Emma Salazar. She and her mother taught attendees about the sheep, wool, and digestion throughout the day.

"With a lot of the stuff that we're doing, we're kind of just showing different ways of thinking about stuff," Salazar said. "Instead of just having sheep here, we're also talking about the biology of them and showing how they're similar to cows and deer. These sheep have personalities just like dogs, but they don't quite train like dogs, they don't quite have that intelligence — but it's just like everything else here. It's interactively showing more than what you just see by just learning about what noises sheep make and about wool and how that's what your sweater is made out of."

Aside from visiting and learning about live animals, visitors could look at a number of exhibits set up inside the gym, each offering a different activity.

Sophie Nevin showcased her research on dance and neuroscience — both of which she studies at Bennington College. She broke down her research, putting it in a way that helped people to understand the science behind the two.

One of her studies focused on visual rotation, which is the ability to be able to rotate a picture of something in your head after viewing it. In her station, she had Play-Doh, which visitors could use to make replicas of models she used in her study - which she had on display right behind her. She also had copies of her studies to read.

"A lot of people have been having fun with the Play-Doh, and taking the models home, which I'm excited about," Nevin said. "Mainly, I'm just talking about the study that I did, some fun brain quirks and fun facts about the brain."

Nevin, one of four students studying neurology at Bennington College, said that she was excited to be able to talk about the subject with other people.

"I think the STEM community on the Bennington campus has a lot of fun with ourselves," Nevin said. While the students will have an opportunity to present their research and their findings to the campus community at the end of the year, she said she was happy that they had had the chance to take their fun out into the community. She added that during her time at the college, she hadn't had many opportunities to get out and meet people in the town that she lives in.

"It's also really great because I think the majority of the of the students that have exhibits here are girls," Nevin said. "I know women in STEM isn't a highly represented thing, so it's really great for little girls to come and see all these adult women having fun with science and not being scared of it."

Note: This story was amended on April 25 to correct the spelling of Sophie Nevin's last name.