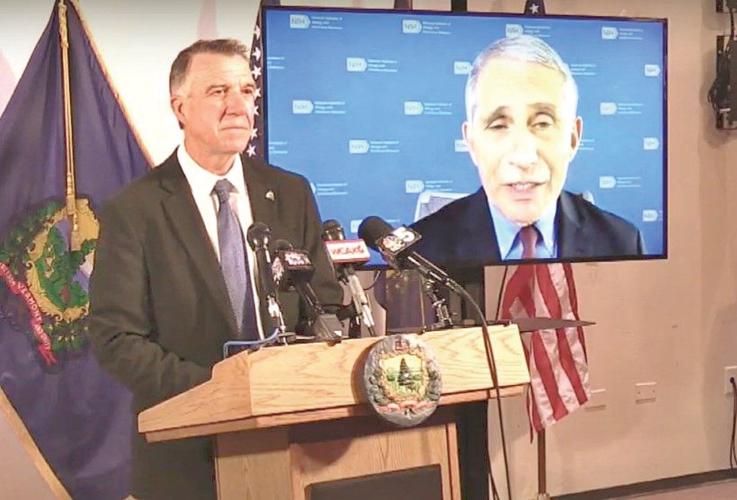 Dr. Anthony Fauci, director of the National Institute of Allergy and Infectious Diseases, speaks remotely during a press conference in Montpelier on Tuesday as Gov. Phil Scott listens. 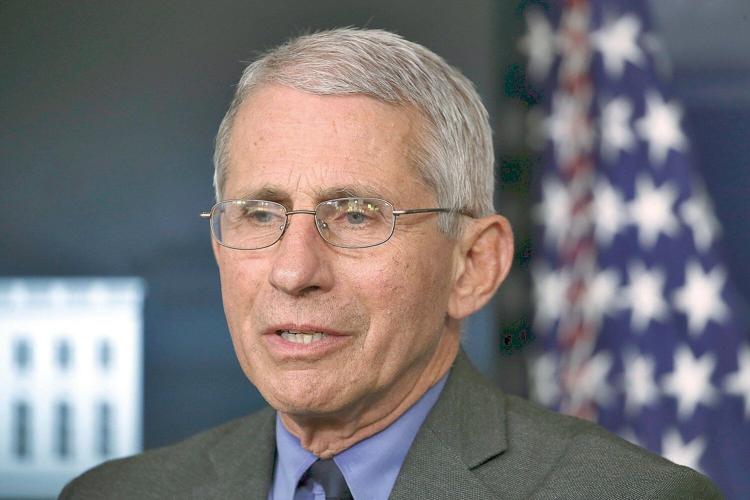 Dr. Anthony Fauci, director of the National Institute of Allergy and Infectious Diseases, speaks about the coronavirus in the James Brady Press Briefing Room at the White House, Monday, April 13, 2020, in Washington.

Dr. Anthony Fauci, director of the National Institute of Allergy and Infectious Diseases, speaks remotely during a press conference in Montpelier on Tuesday as Gov. Phil Scott listens.

Dr. Anthony Fauci, director of the National Institute of Allergy and Infectious Diseases, speaks about the coronavirus in the James Brady Press Briefing Room at the White House, Monday, April 13, 2020, in Washington.

MONTPELIER — Dr. Anthony Fauci, the U.S. government's highest-ranking infectious disease expert, remains impressed by Vermont's response to the COVID-19 pandemic — and optimistic that a safe, effective vaccine is months away.

Appearing remotely in the first half-hour of Gov. Phil Scott's twice-weekly COVID-19 briefing on Tuesday, Fauci said he is confident that the vaccines for the virus now in advanced stage clinical trials will be released when they are medically and scientifically ready, without political pressure, and that there are enough layers of scrutiny to protect health and safety.

"I can tell, based on my experience and what I'm seeing, if there's a vaccine, which I'm fairly certain there will, be that is safe and effective, I for one would not hesitate to take it — nor would I hesitate to recommend that my entire family do it," Fauci said. He believes it likely that a vaccine could be ready by November or December, but more likely to be distributed in January or February.

There are six vaccines currently in trials, Fauci said, but he stressed that technical advances have allowed vaccine development that would have taken years to be completed in months. He also emphasized that there are multiple independent layers checking vaccines for safety and efficacy, as well as a pledge from the Food and Drug Administration that it will not rush approval of a vaccine unless it is proven safe and effective.

Finally, Fauci said, there is the scientific community — people like him "who very carefully look at that and are not shy about giving scientific opinions."

A member of President Donald Trump's Coronavirus Task Force, Fauci acknowledged Vermont's low population density makes it different from other states when considering its success in preventing community spread of the virus. But he also said that if other states could follow Vermont's lead, "we can not only get through the fall and the winter, we can come out on the other end better off than we went in."

Specifically, Fauci credited Vermont officials for sticking to fundamental principles that slow the spread of the virus, such as wearing masks, maintaining social distancing, and washing hands.

Vermont's approach, Fauci said, is "what I have been trying very hard over the last several weeks and months to communicate to the nation about how we can actually open up economy, get our children back to schools, get people back to work in a safe, measured, prudent way."

But Fauci also cautioned that the road ahead will not be easy. COVID-19 is a tough opponent, he said, and does not care if you live in the country or the city.

"Even when you are in as good shape as Vermont is, you got into good shape by certain things you've done. Don't get careless," Fauci said. "Be prudent and careful in your interaction in the community."

Scott, in his introduction, acknowledged he is a "big fan" of Fauci.

"He's someone I've been so impressed with over the last six months," Scott said. "He tells it like it is and in a way most of us can understand."

Fauci has at times been targeted by Trump for contradicting Trump's optimistic predictions about the pandemic.

Last week, the news website Politico reported that emails showed an appointee reporting to Michael Caputo, the U.S. Health and Human Services assistant secretary for public affairs, had advised public affairs staff at the National Institutes of Health about what Fauci should tell reporters. A congressional subcommittee is investigating allegations that Caputo and others attempted to alter the CDC's weekly mortality and morbidity reports on the pandemic.

Fauci, who has served every president since Ronald Reagan, was asked to describe, in his experience, what a healthy relationship between government, politics and science should look like. He said it's hard to make such comparisons because the political and societal conditions and medical challenges vary greatly.

"It really depends in fairness to any given administration to the level of [political] divisiveness that there is in the society," Fauci said. "When you have everyone pulling together and you leave the kinds of decisions we're talking about to the scientists, and there's little disagreement one whatever side of the political spectrum you're on, things work very well," Fauci said .

But when the climate is more divisive, such as an election year, "it makes it much more difficult than other situations I have found myself in, such as the anthrax attacks following 9/11," Fauci said. "There was total unanimity in the country about what needed to be done."

The same was true when it came to HIV/AIDS, though there was a stigma associated with that virus at the time, Fauci said. "There was a universal push that ultimately led to a very very successful approach" with therapeutic drugs, he said.

Fauci, director of the National Institute of Allergy and Infectious Diseases (NIAID) since 1984, has served as a top expert on HIV/AIDS and other infectious diseases to six presidents. At NIAID, a wing of the National Institutes of Health, he has overseen research in the prevention, diagnosis and treatment of HIV/AIDS, as well as existing illnesses such as tuberculosis and malaria and developing illnesses such as Ebola and Zika. He was awarded the Presidential Medal of Freedom, the nation's highest civilian honor, by President George W. Bush in 2008.