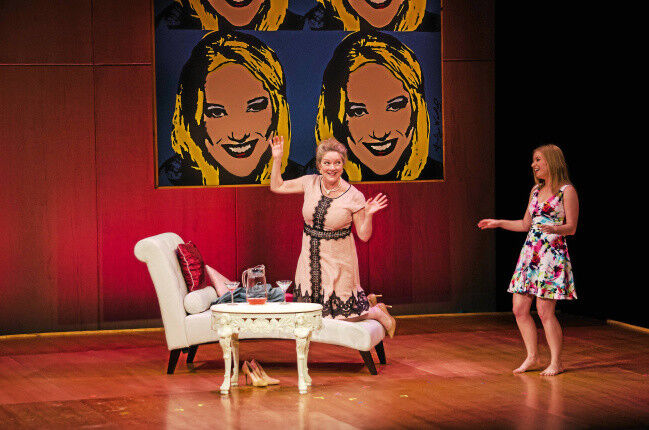 Actors Kristine Nielsen and Elizabeth Evans perform in Dorset Theatre Festival's world premiere of "The Way of the World," by Theresa Rebeck. The Edgerton award-winning play, will run through Aug. 13. 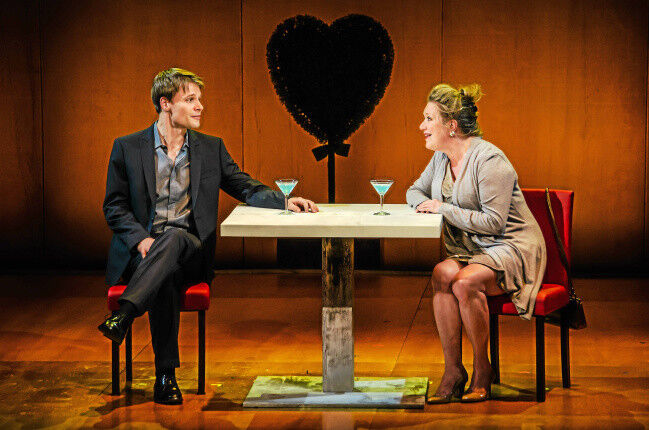 Josiah Bania and Kristine Nielsen perform in "The Way of the World," a play by Theresa Rebeck.

Actors Kristine Nielsen and Elizabeth Evans perform in Dorset Theatre Festival's world premiere of "The Way of the World," by Theresa Rebeck. The Edgerton award-winning play, will run through Aug. 13.

Josiah Bania and Kristine Nielsen perform in "The Way of the World," a play by Theresa Rebeck.

DORSET >> Two plays joining together as one, but three centuries apart. A world premiere. One of America's most celebrated playwrights. A stacked lineup to top-shelf actors.

If all those thing can't get you to Dorset Theatre Festival to see "The Way of the World," written and directed by Theresa Rebeck, kindly check your pulse. Rebeck's adaptation of William Congreve's 1700 Restoration-period comedy is a buzz show, and rightfully so.

Set in the hyper-rich Hamptons, it tells the tale of good-hearted heiress Mae (Elizabeth Evans) who falls for party boy Henry (Josiah Bania), who in turn has seduced Mae's aunt Rene (Kristine Nielsen).

Surrounding them in the twists and turns of the idle wealthy are Mae's love-hate gal-pal Katrina (Nilanjana Bose), and Henry's gay buddy Charles (David Turner). The randy Reg (Brian Dykstra) is along for the ride, all as Rene tries to woo Lyle (Brent Langdon), while the Waitress (Katie Paxton) float back and forth through all of this.

Mae is furious with Henry's infidelity. But his insistence on winning back the $600 million leading lady fuels the summer's gossip in the land of the 1-percenters.

Turner took gay comic affectation to new heights. His Charles was so frightfully genuine, I felt I needed to buy a Gucci bag before leaving the theatre. In a complete 180 from Charles, Brent Langdon's Lyle was a decent, quietly yearning man, portrayed in an understated yet firm way that still made him eminently likable.

Bose's Katrina was sassy, sultry and at times squirm inducing, her raven mane adding to the palpable provocation she flaunted. Dykstra did not disappoint as Reg, his scatological outbursts drew laughter yet also cleverly called attention to Reg's brutal honesty and views of life.

Bania's Henry was charmingly believable as a light-hearted Lothario who could woo the girls but still want love at the right time. For her part, Evans' Mae, as the cast's shortest character, stood taller than all the rest and made us feel her conviction deeply to do the right thing, not just talk about it.

Nielsen showed everyone why that Tony on her mantle shines brightly, as her Rene made us laugh through bouts of irony and peerless physical comedy, as well as wince with pity in her desolation. Her acting was a tour de force.

Finally, there are just some smaller roles which actors lick their chops to play, as I suspect Ms. Paxton did with the Waitress.

Part Greek chorus, part townie airhead, part morally bankrupt and part groupie, Paxton eye-rolled, pouted and pranced from darkness to light and then back again, right into our hearts. The anticipation of what terribly outrageously tangent she would throw against the fourth wall to see if it would stick was show-stealing stuff. Bravo!

The show ran just over two hours with a 10 minute intermission.

Sound by M.L. Dogg keep feet tapping and scene changes rolling. Michael Giannitti's light work was beautifully done in electric hues that enhanced the thought of a surreal existence. Barbara A. Bell's costumes were sassy and edgy; Rene outfits especially were perfectly matched for both caricature and predicament.

Narelle Sisson's set was at once austere, surreal, practical and eye catching - marvelous work. A salute must also be rendered to the stage management of Will Rucker and the rapid precision of the techies.

Lastly, we don't often get to see a play at Dorset that benefits from a dramaturg, but this play's Edgerton award came with funds which allowed us to have Margarett Perry work her magic.

Adaptations are tricky animals. On the one hand, some will always complain they are too derivative. On the other, writers must flesh out the delicate balance between their voice and the original.

Yet "The Way of the World" is a soundly constructed bridge spanning a 300-year old chasm. And its architect, Ms. Rebeck, earned her way across to the first audiences' applause and affirmation, with a trail of outstanding Thespians following her lead.

The question of whether the hyper rich can love in the same way as common folks, all while ensconced in a superficial world, seems timely in a social sense, yet largely detached from most of us. As in Congreve's original, while some characters fair better than others, no one comes out smelling like roses, and thus we are left, perhaps appropriately, with no one to truly embrace.

What makes Rebeck's adaptation work for today is her ear for conversation – for the verbal dialogue and crossfire which is waning from our increasingly face-in-the-smartphone existence. And the fact that many of our intimacies today are progressively influenced by electrons and emojis instead of good ol' face-to-face.

As such, "The Way of the World" is very funny in a deeply intelligent way, and offers up excellent acting in a feast-of-the-senses setting. For a new play that Ms. Rebeck will continue to develop, that's a superb launching point, and not to be missed by those who want to laugh, and love.

— Telly Halkias is an award-winning freelance journalist, and a member of the American Theatre Critics Assn. (ATCA)