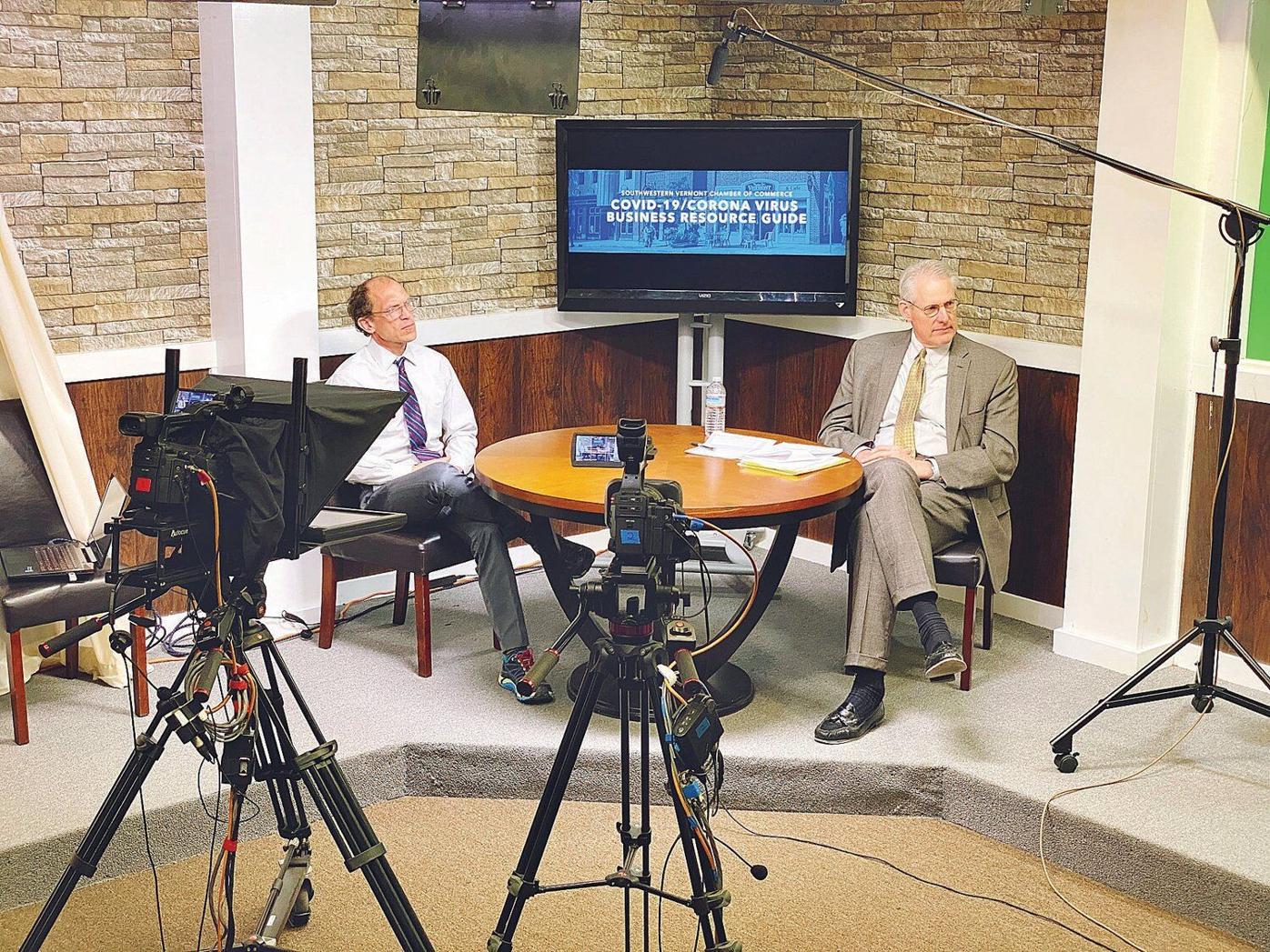 From left, Trey Dobson, MD, the medical director of Southwestern Vermont Medical Center in Bennington, and Tom Dee, the CEO of Southwestern Vermont Health Care, talk about the hospital's response to the spread of COVID-19, the disease caused by the novel coronavirus. The forum was broadcast from the Catamount Access Television offices in Bennington. 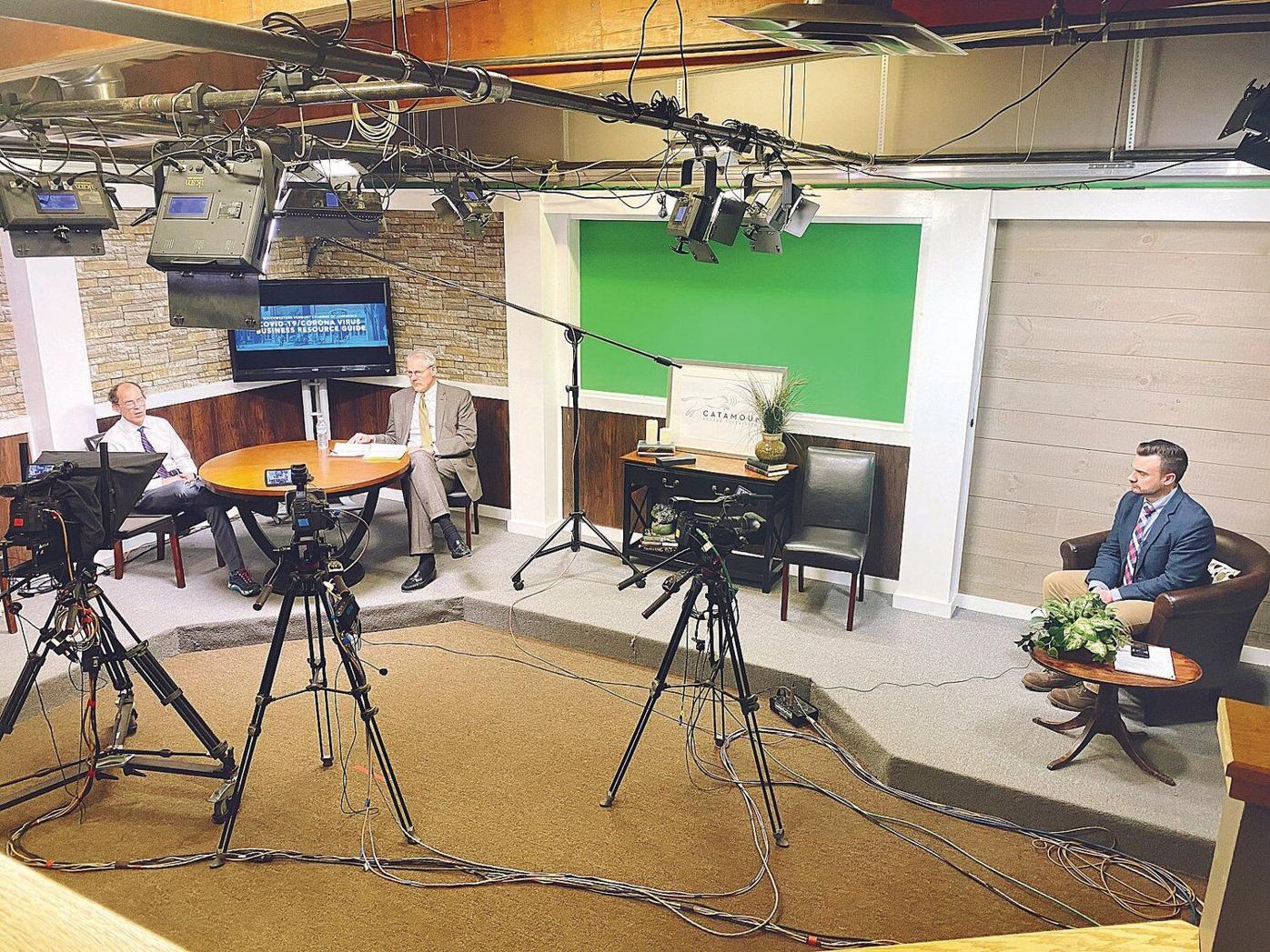 From left, Trey Dobson, MD, the medical director of Southwestern Vermont Medical Center in Bennington, and Tom Dee, the CEO of Southwestern Vermont Health Care, talk about the hospital's response to the spread of COVID-19, the disease caused by the novel coronavirus. The forum was broadcast from the Catamount Access Television offices in Bennington.

BENNINGTON — All three of Southwestern Vermont Medical Center's patients who have tested positive for COVID-19 are in stable condition and improving, with one "looking to be discharged home," the medical center's chief medical officer said during a televised informational forum.

The improvement in the patients' conditions is "just a great success," Trey Dobson, M.D., said during a Southwestern Vermont Chamber of Commerce "Lunch and Learn" event Monday broadcast by Catamount Access Television. All the patients are over the age of 60, and all had been sick enough to the point of requiring intensive care, he said.

SVMC is considering the possibility of staff working outside their normal areas of focus, part of the hospital's planning for a potential surge in patients due to COVID-19, the disease caused by the new coronavirus, Dobson and Tom Dee, the CEO of Southwestern Vermont Health Care, said during the 40-minute-long program, available at CAT-TV's Facebook page.

Dee and Dobson provided updates on the hospital's efforts and answered questions from the community, sent via Facebook comments on the video.

In response to a question, Dee said SVMC is "fully looking" at its own ability to handle a possible surge in patients.

Officials expect, short-term, that they will need to go beyond the typical number of inpatients, and believe they have the capacity to do so, he said.

Dobson added that the idea is to try to maximize availability within the system. SVMC has units not being used for inpatient beds, but they could be used for that purpose if need be. Officials are looking at that idea first, he said.

Dee said they are also considering somewhat of a "redeployment," inventorying their staff's background and experience and exploring utilizing them in different areas."

That would include things like doctors and nurses who normally staff outpatient clinics working in the hospital, Dobson said.

Drive-up testing, instituted the weekend of March 6 at SVMC, yields results from the Vermont state lab within 72 hours, Dobson said. The test must be ordered by a physician.

"We will ramp that up if we need to, increase our hours," Dee said. "We're really pulling together entire resources as a hospital in terms of our manpower to be ready for this."

Dobson clarified that there is no cost from the state or the hospital for the COVID-19 test.

In a conversation with the Banner Monday afternoon, Dobson said the slots for those tests did fill up "at or near" capacity, particularly on the first, second and third days of doing the test, but that wasn't the case over the weekend and Monday, he said.

Sometimes slots fill for the day, but patients can be tested the next day, he said.

"These are all patients who the primary care providers do not believe need to be hospitalized," he added.

He said he does not anticipate patients having to wait longer than the next day for testing. In the meantime, patients are advised to stay home, he said.

The hospital is considering adding more testing slots, but must take into account the fact that they don't do the testing themselves — the state lab does, and also must consider their staffing resources, Dobson said.

These things are being addressed by SVMC and the Vermont state lab, he said.

Dobson said he believes that SVMC will use commercial labs for testing as well, as an adjunct to the Vermont state lab, to accommodate potential increases in patients needing testing.

He clarified that patients would also not be charged for testing that is done in commercial labs.

Initially, the country had a shortage of testing kits, but the supplies are getting "better and better," Dobson said.

"I don't anticipate a shortage of tests," he said. "This is a dynamic situation, it changes daily. That's my anticipation based on my knowledge of what's going on."

This week, the hospital also plans to set up a process for patients who don't have a primary care provider to be tested for COVID-19, as the test must be ordered by a provider.

That process will involve a provider patients can get in touch with, who can then act as the ordering physician, Dobson said.

He said the hospital has already helped some patients without primary care providers get tested.

When patients call the hospital's COVID-19 hotline, they would be directed to that office, Dobson said.

"We've been planning for this really actively since mid-January, in anticipation of this potential problem which now is upon us," he said. "It's almost consuming us on a daily basis."

Now, officials are in the mitigation stage — trying to slow the spread of the virus from individual to individual, Dobson said.

Right now, the hospital has aggressive screening measures in place, and officials are meeting multiple times a day, looking at the protocols to make sure they have the most up-to-date procedures in place, Dee said.

"Everyone's fear throughout the country is that healthcare has finite resources," Dobson said. Hence, the mitigation strategies.

He said SVMC is asking people who don't need to be seen to consider staying away from the hospital, so that the emergency department can focus on the most vulnerable patients, but added that the hospital is very capable and open to taking care of patients that need to be seen.

"But there is some prioritization in a crisis situation," he said.

Most people with the virus — more than 80 percent — have mild symptoms, Dobson said. "I am certain we will see more, and we may have deaths," he said.

For the most part, mild symptoms can be taken care of by staying at home, and people tend to get better rapidly in that situation — within 5-7 days.

But they are to remain in their homes for 14 days, to prevent the spread of the disease.

The other around 20 percent of people who contract the disease require hospitalization, and of those, about 5 percent require intensive care — these are generally older individuals with underlying diseases, like lung disease, heart disease or diabetes, Dobson said.