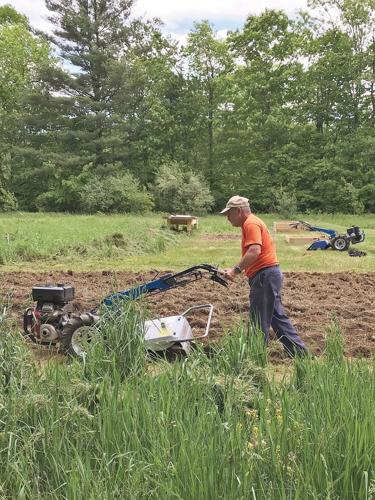 Volunteer Roger DeWitt, of Bennington, works at the garden site at the Yellow Barn property in Arlington.PHOTO PROVIDED 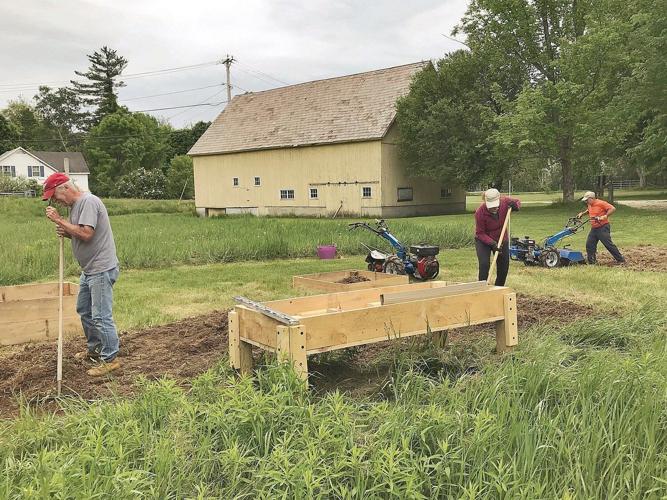 From left, Roger Hanson, Heather Hamilton and Gary DeWitt prepare the garden site at the Yellow Barn property in Arlington.

Volunteer Roger DeWitt, of Bennington, works at the garden site at the Yellow Barn property in Arlington.PHOTO PROVIDED

From left, Roger Hanson, Heather Hamilton and Gary DeWitt prepare the garden site at the Yellow Barn property in Arlington.

ARLINGTON — A volunteer-powered group is working to revive a community gardening project at the town-owned Yellow Barn property on Route 313.

"It's just been an amazing string of miracles," said Sandgate resident Dottie Sundquist, a member of the group who also chairs the Bennington chapter of the University of Vermont Extension Master Gardeners.

The garden, which initially will consist of several raised beds and a conventional, flat garden, will help to supply produce for the Arlington/Sandgate/Sunderland Summer Lunch Program, which is coordinated by the Federated Church of East Arlington. This year the lunch program, now in its 12th year providing bags of lunch fixings to children in the three towns, will run from June 9 to either August 18 or 25, depending on when the school year starts, according to Rev. Kathy Clark, the church's pastor.

The program will be serving 97 children this summer, up from 70 the previous year, Clark said.

Clark had been exploring establishing a garden on green space owned by the church through the UVM Extension Master Gardener program's new Vermont Victory Garden project, which connects master gardener volunteers with people affected by food insecurity and organizations that serve them, according to the project's webpage. She subsequently spoke with Sundquist about the committee's efforts already underway at the Yellow Barn property, and the two opted to collaborate.

If the garden project continues beyond the summer, or if there is excess produce, food will be donated to the Arlington Food Shelf and Meals on Wheels of Bennington County, Clark said.

In addition to addressing food insecurity, the garden will serve to educate the public on the pros and cons of different gardening approaches, Sundquist said.

"Our vision is to offer the backyard gardener opportunities to learn best gardening practices with actual demonstrations," the group, formally known as the Yellow Barn Community Garden Committee, wrote in a recent letter to the Arlington Select Board. "Raised beds with compost bins nearby will show individuals exactly what the process entails and hands-on demonstrations will offer science-based research to further their knowledge."

At its May 18 meeting, the board granted the committee permission to install raised beds and compost bins and to extend a water line. The town will also allow the group to hold one-day gardening demonstrations.

State Rep. Cynthia Browning, who is also a member of the board, organized the previous iteration of the community garden at the site for about three or four years, beginning in 2009 or 2010, she said. Though the project received support from youth groups and volunteers, eventually the work became "too much for me, and I wasn't good at getting the volunteers together," she said.

"I think this may be a moment when people are really motivated," Browning said. "I think it's a really great idea."

This time around, the involvement of the local master gardener chapter, which currently has 18 members, means that those individuals will be able to accrue hours required for maintaining their certifications by working in the garden, Sundquist said.

"We are starting off small because we want to start off with success," Sundquist said of the garden's current footprint, adding that the Yellow Barn property has "acres and acres to grow on should the need prevail and the volunteers appear."

The group "definitely will need volunteers throughout the summer" to assist with weeding, watering, picking and transportation, Clark said. People interested in volunteering or donating to the cause may contact Clark at (802) 375-2548 or ksclark58@yahoo.com. Prospective volunteers may also contact Sundquist at (802) 688-4707 or dotsun53@gmail.com.