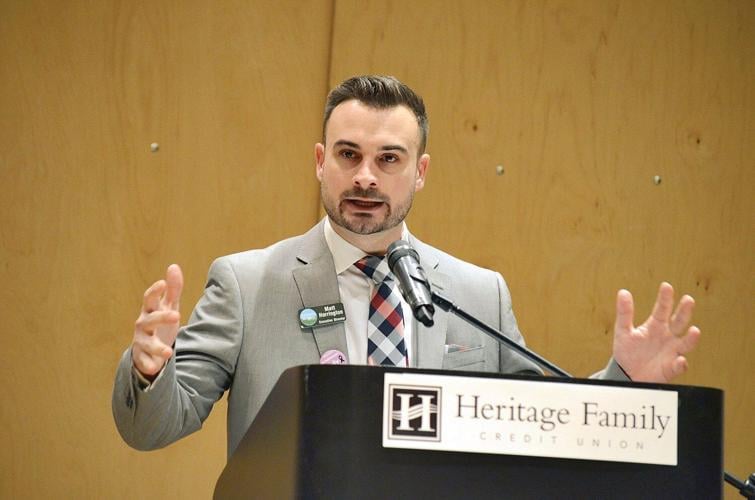 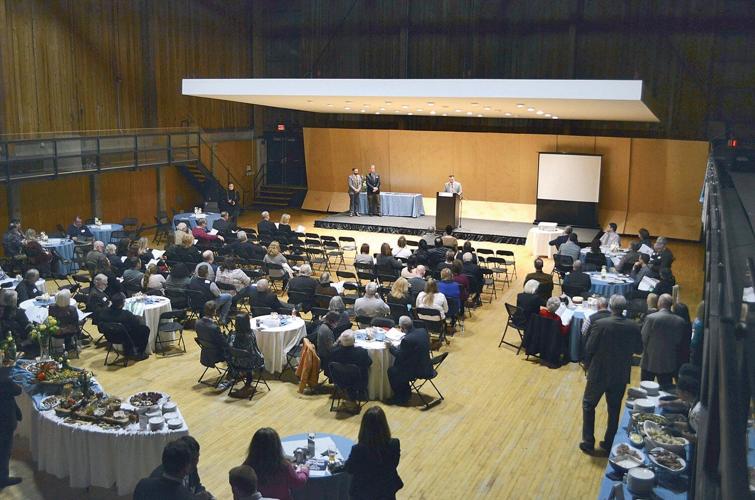 An audience of approximately 200 people gathers at the Visual and Performing Arts Center at Bennington College for the chamber's annual membership meeting Friday night.

An audience of approximately 200 people gathers at the Visual and Performing Arts Center at Bennington College for the chamber's annual membership meeting Friday night.

BENNINGTON — The regional chamber of commerce on Friday presented its annual awards, remembered a tireless volunteer and rolled out a name change meant to reflect a regional focus.

The 109-year-old chamber will now be known as the Southwestern Vermont Chamber of Commerce, executive director Matt Harrington announced to a round of applause at the meeting at the Visual and Performing Arts Center (VAPA) at Bennington College.

"This is something we've been building up to," Harrington said told audience of approximately 200 chamber members. "The past three years have seen a huge expansion by this chamber to embrace the Northshire and all the collective 17 towns of Southwestern Vermont. This night was about the final crescendo of that vision; the peak; a celebration of the foundational elements this chamber and its members have been laying out for three years. We're excited for the next adventure with the new name."

The organization, which had been known as the Bennington Area Chamber of Commerce, wanted the organization's name to give a sense of place and location.

"As we've said from the beginning of this journey, this region is stronger together," Harrington said.

The change is in place to better reflect the chamber's mission to be a regionally recognized chamber for membership growth and assistance, operational and leadership excellence and a catalyst for Southern Vermont economic development, Harrington said.

He referenced examples of that strength together through things like the Vermont Shires Connector shuttle service to the governor's events throughout the region, and the Stay to Stay program, which has brought over 60 people to the region, to the realization of the Putnam Block redevelopment project with investors from all over the county.

The name change was decided by an overwhelming majority of the board of directors, and was supported by the board's executive committee of officers.

"As business owners and community leaders, we have had to adapt and evolve daily to accommodate the changing landscape and the needs of the region," said Brian Maggiotto, current president of the chamber's board of directors and general manager of The Inn at Manchester. "The name change will only quicken our ability to support and represent the full region and our growing membership."

The chamber holds its annual meeting in January with the goal of bringing all chamber members together.

Maggiotto highlighted some of the past year's wins and his excitement for the future, and discussed stronger regional ties and the strength of the region coming together.

Harrington, who is now entering his fifth year as executive director, described the various people who have helped make the chamber what it is, including staff, the board, volunteers and members. He compared their coordinated effort to the V formation used by Canada geese.

"Scientists have learned that as the birds flap their wings, it creates uplift for the bird immediately following," he said. By flying in a V formation, the flock adds at least 71 percent greater flying range than if each bird flew alone if anyone has witnessed the over 150 volunteers at this year's Garlic Fest, you could see the 71 percent lift we had by flying together."

Additionally, he said, geese honk from behind to encourage those in front to keep up their speed.

"Of course, many of us have been recipients of Lindy Lynch's honks," he said, to appreciative laughter from the audience.

Lynch was a former president of the chamber's board of directors and lead organizer of Bennington's popular Garlic and Herb Festival, the chamber's largest event that is known as Garlic Fest.

Lynch died last August at her home in North Bennington after a five-year battle with cancer.

At Friday's meeting, the chamber also introduced a 2020 budget for the organization, which the membership voted on and passed.

The business meeting portion of the event began with a tribute to Lynch.

State Rep. Mary Morrissey, along with chamber leadership, presented the Lynch family with a state proclamation in honor of Lynch for her many years of service to the chamber, Garlic Fest and the Bennington community.

To end the meeting, Harrington and the executive board of the chamber presented the chamber's annual awards, which honors citizens' contributions to the area.

The D. Ed Moore Award, given to the member who best enhances the effectiveness of the Chamber and its programs, was awarded to Matt Willey of Ramunto's Pizza, the Buck Stop and The Avocado Pit.

Sue Andrews, the outgoing director of Greater Bennington Interfaith Community Services (GBICS), received the President's Award, which is given to a community member who has been an outstanding volunteer for the chamber.

The Bennington Redevelopment Group took home the Business Community Spirit Award, which is given to an organization for supporting community events and presenting Bennington in a positive light.

Chris and Holly Wright and Sandra Danforth Fothergill, of the Bennington Blotter Facebook page and various town events, were awarded the Mike Williams Hospitality Award, which honors individuals with a positive attitude and pleasant manner in the promotion of Bennington.

The Young Professional of the Year Award in the community/nonprofit sector was awarded to Alexina Jones, acting director of operations at the Bennington Museum.

Ed Barbeau, of Global Z International, was awarded the Young Professional of the Year Award in the business sector.

Paula Maynard received the Regional Visionary Award, which is given to a person who has made significant contributions to the improvement of the business environment and quality of life in the Shires region as a whole.

The awards are determined by multiple factors including membership vote, past recipients, staff, annual dinner committee and the board.

The Bennington Banner was a sponsor of the event, along with other organizations, including Heritage Family Credit Union, Tomasi Sports and Awards, The Inn at Manchester, KW Brenda Jones Real Estate, Cummings and Dailey LLP, At Home Senior Care and Berkshire Sign Studio.