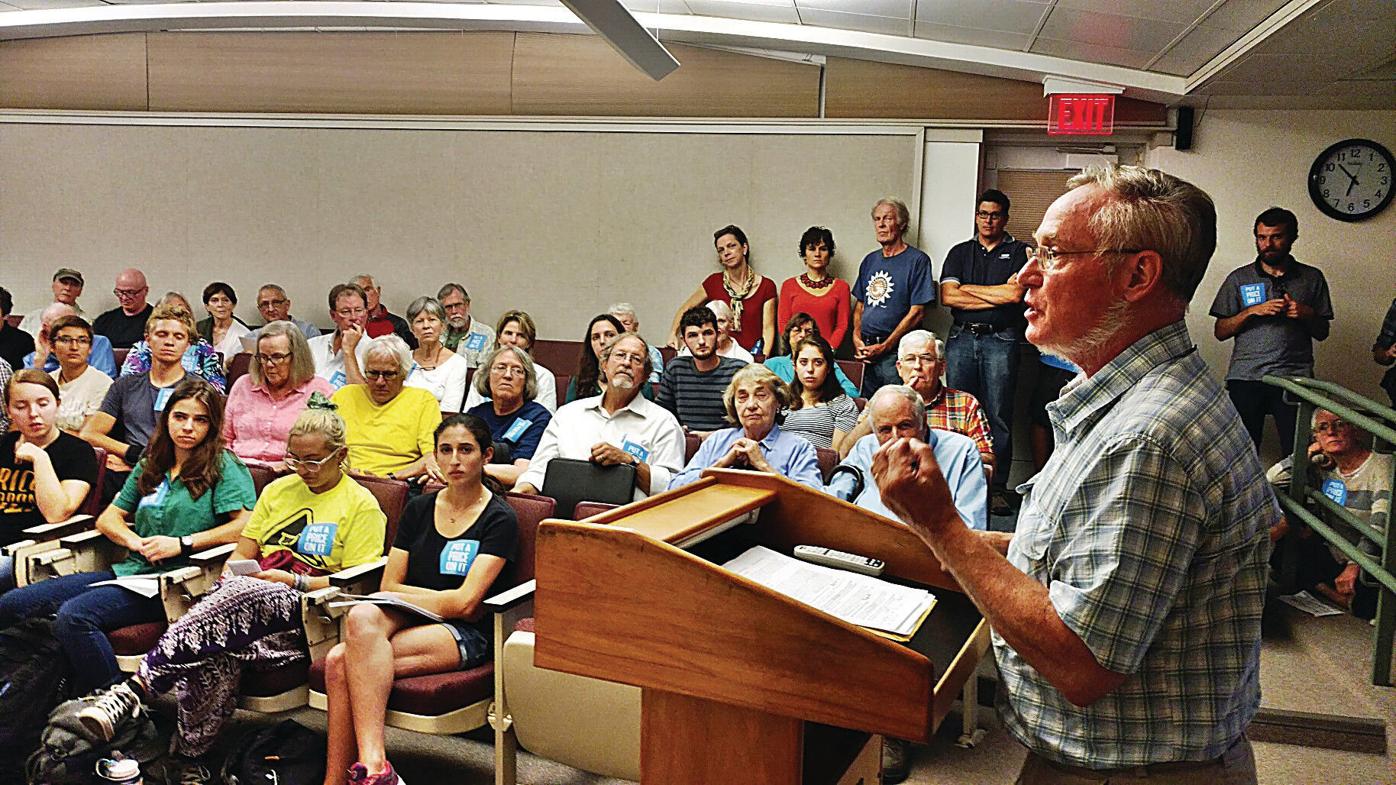 Dr. Alan Betts, of Atmospheric Research in Pittsford, speaks at the Governor's Climate Action Commission's Public Hearing at Burr and Burton on Thursday. 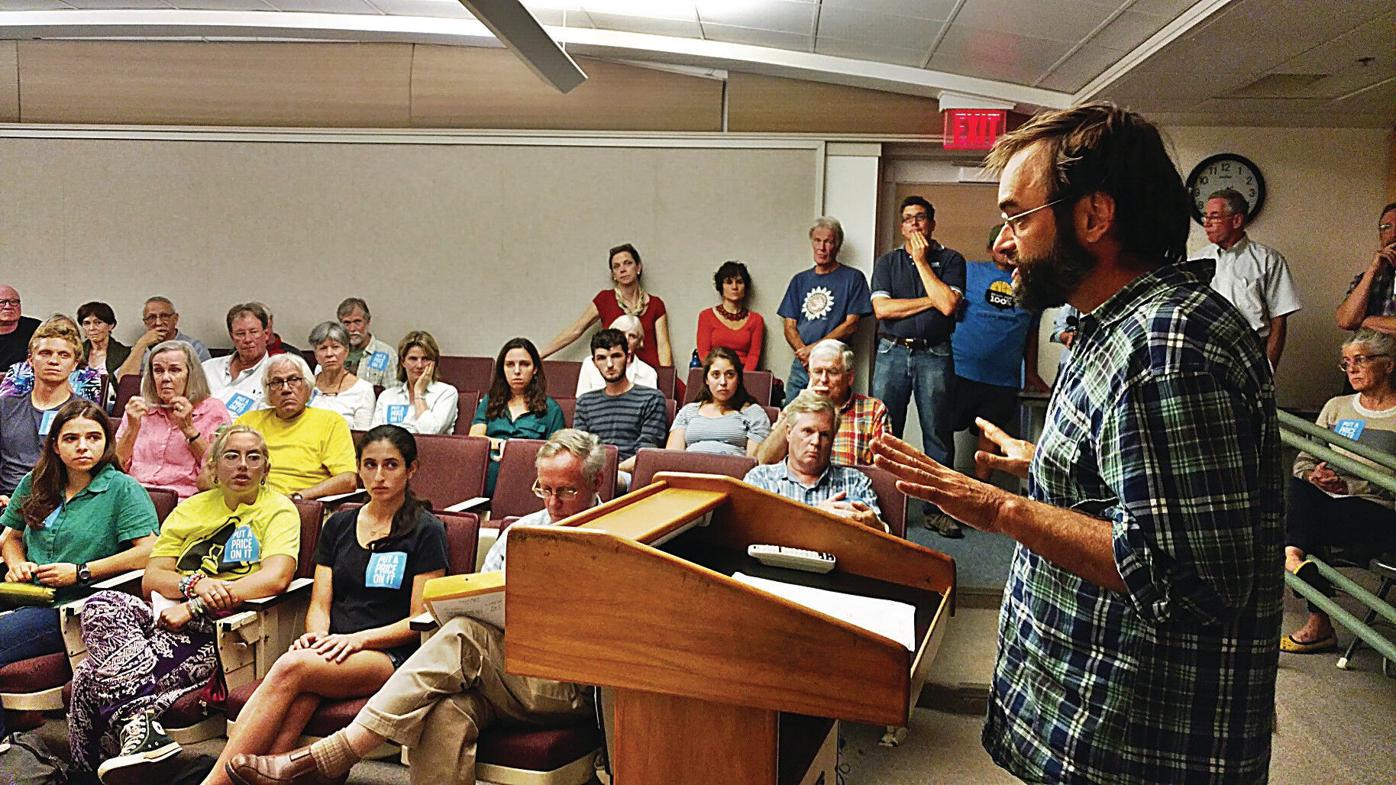 Dr. Alan Betts, of Atmospheric Research in Pittsford, speaks at the Governor's Climate Action Commission's Public Hearing at Burr and Burton on Thursday.

MANCHESTER — The implementation of a carbon tax was the number one request at a public hearing of Gov. Phil Scott's Climate Action Commission at Burr and Burton Academy Thursday night.

Members of the commission, including locals Tom Donahue from BROC Community Action and Bill Laberge from Grassroots Solar, came to Manchester for one of four public hearings across the state.

"We're here to get to the action; what do you want us to recommend to the Governor?" asked Deputy Secretary Peter Walke of the Vermont Agency of Natural Resources. "Our job is to make realistic recommendations. We all know that climate actions are needed, but we need to do it in a way that continues to drive Vermont forward and helps us reach all of the other goals that we have."

"Our economic system that maximizes profit and value now specifically discounts the future. In the process, it discounts the future of all of our children's lives and the earth itself," said atmospheric researcher, Dr. Alan Betts, of Pittsford, who served on Gov. James Douglas' Climate Commission. "There's a lot we have to pay for; both mitigation and dealing with Vermont's issues. A carbon tax is an obvious source for that."

"Climate change does not come at zero expense to the people of Vermont and the people of the planet," said Bennington College Student Sabrina Melendez, who also recommended democratically owned and operated renewable energies in the state of Vermont. "If large corporations responsible for polluting the atmosphere do not understand the value of our winters, of maple syrup, of glaciers, of wildlife, and our most vulnerable populations who stand directly in the path of large scale natural disasters, then perhaps they will understand the value of money."

According to Manchester's Carl Buckholt, who also urged divestment from banks supporting oil pipelines, the cost should be shouldered by oil companies rather than citizens.

"The effects of these hurricanes might cost $300 billion — I believe that's less than what we give to the oil companies each year in terms of tax breaks and subsidies," said Buckholt. "It's ridiculous to say they can't afford a tax on carbon. Clearly, they can."

Many citizens, however, expressed concern for the impact a carbon tax would have on Vermont's poorest populations.

"While I'm all in favor of very severe carbon pricing, the Vermont government needs to do it in a very holistic way, taking into account the effects on all of its citizens," said Ed Morrow, co-founder of Manchester's Northshire Bookstore. "In a rural state with very little in the way of public transportation, carbon pricing would hurt a good percentage of our population already in dire straits."

Alongside recommendations for a carbon tax, the commission also heard multiple requests for Government support of electric cars and charging stations, subsidies for weatherization and solar — and subsequent requirements for new construction — methane regulations, improved educational efforts, and investments in public transportation options.

"I'm not very far from being an old biddie; there's a day that I'm not going to drive or shouldn't be driving," said Dorset's Ellen Maloney, infusing a dash of humor into the discussion. "We need some kind of encouragement for van services. This kind of thing would serve more than one purpose."

"We don't have an interstate, and we have a horribly congested Route 7," said Danby's Annette Smith, who also shared recommendations based on her experiences living off the grid for over 30 years. "This is something I've been talking about for ten years, but let's get commuter rail on the Western Corridor."

While the majority of speakers provided passionate recommendations to the commission, others questioned the reality of climate change overall.

"I've heard an awful lot of very sincere people that are worried about climate change, but the climate has always been changing," said Tony DuPont of Manchester. "The questions is, has carbon been causing it?"

That skepticism was not well received by speakers who have been personally impacted by recent catastrophic weather events, like Bennington College student Stevie Martinez Farias.

"My family is one of the thousands that were affected by the destructive earthquake that occurred in Mexico recently," said Faris, originally from Texas. "I can't stress enough the effect climate change is having right here in the present."

"This year the Caribbean has seen three hurricanes, the size of which we should only expect to see once every 500 years," said Melendez, whose family in Puerto Rico was affected by Hurricane Maria. "These are exactly the kind of natural disasters that my generation will have to deal with. Young people didn't cause this issue, but we will be disproportionately affected by it."

"I can't get in touch with my family, and even in Puerto Rico people can't get to the mountains where they live. I don't know if they're alive," said Hangen. "For all of us who went through [Hurricane] Irene, we need to think of that cost coming back with three times the wind and twice the rain."

Hangen, a Researcher and Professor of Economics at the University of New Hampshire's Carsey School of Public Policy, also questioned the philosophy behind our economic choices.

"When you're talking about the survival of the planet and the wellbeing of your grandchildren, applying a 5% discount rate in this kind of social cost analysis is insane," added Hangen.

While many praised the commission for holding public hearings, and Governor Scott for his creation of the commission, others urged Vermont's leader to take a step further.

"We need an activist Governor at a time when the party that gave us the National Parks System and the Environmental Protection Agency, and that actually signed us up to the U.N. Convention on Climate Change, has lost its senses on this issue," said Cameron, who is also a co-chair of the Commission. "A Republican governor is the most important voice in the country on this issue right now."