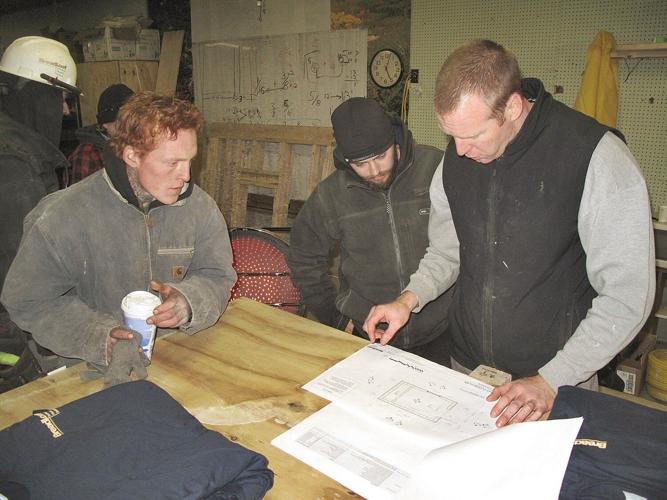 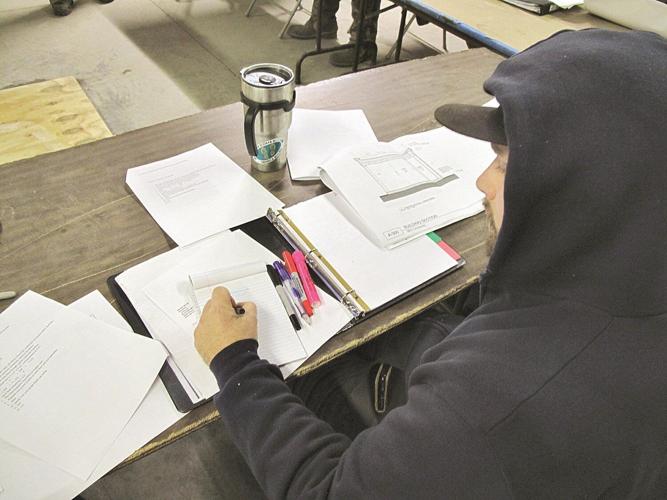 Adam Jones, a participant in one of Bread Loaf Corp.'s free training sessions at the Putnam Block site, takes notes. 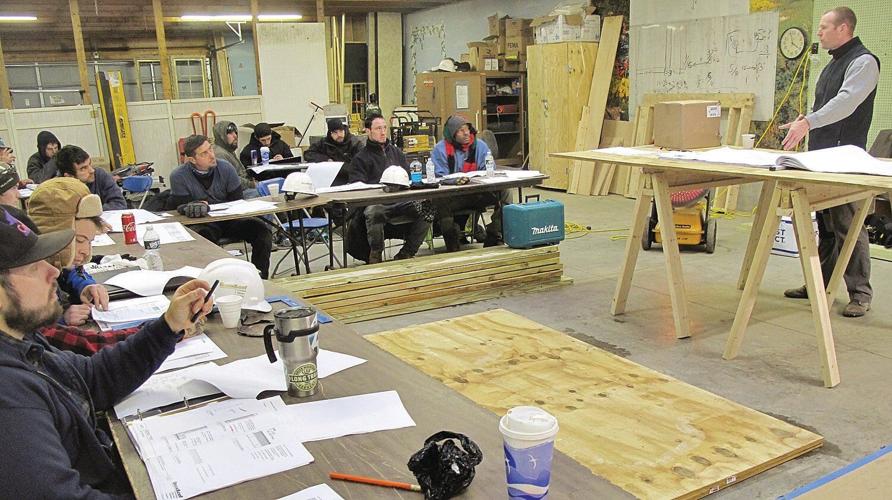 About 20 entry-level workers participate in a training session at the Putnam Block site on Nov. 14, 2019. 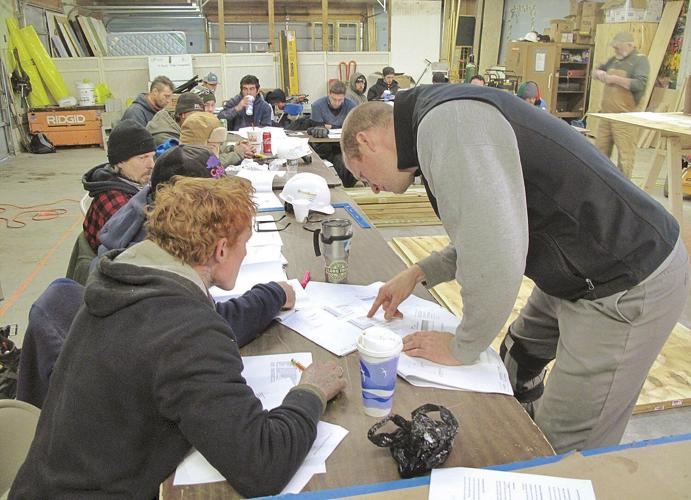 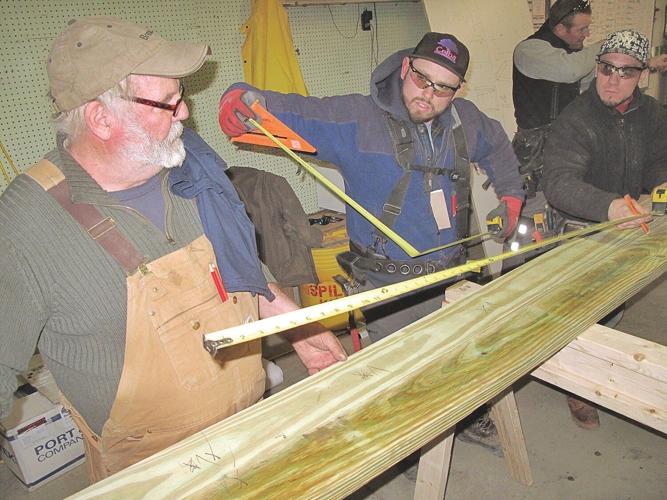 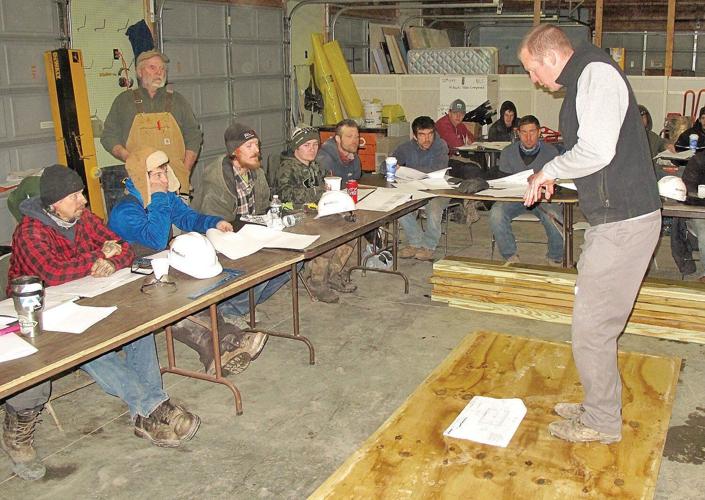 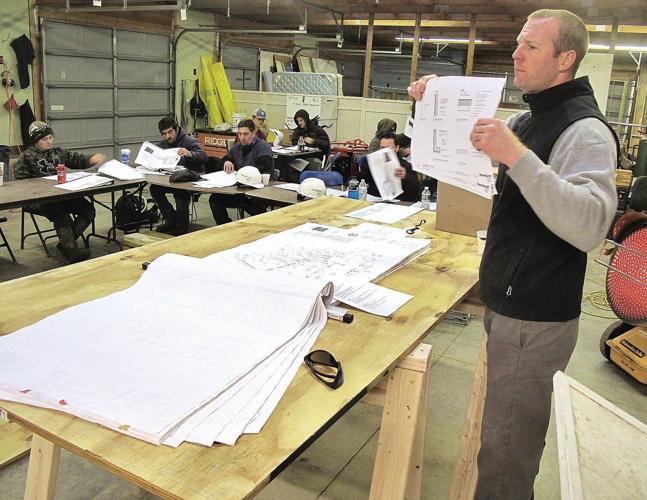 Adam Jones, a participant in one of Bread Loaf Corp.'s free training sessions at the Putnam Block site, takes notes.

About 20 entry-level workers participate in a training session at the Putnam Block site on Nov. 14, 2019.

BENNINGTON — Once a week since September, some construction workers at the Putnam Block site have opted not to go home at the ostensible end of the workday.

About 20 entry-level laborers, all recent hires, gathered Thursday just after 3:30 p.m. inside a former Greenberg's lumberyard shed that — at least until it is demolished to make way for a future phase of the project — serves as a makeshift classroom, warmed by a portable heater.

Ryan Ahern, Bread Loaf's director of safety and training, using an empty cardboard box as a prop, described the different orientations reflected in a packet of architectural drawings distributed to trainees at the session's outset.

The drawings depict an 8-by-10-foot shed that resembles a kind of scaled-down version of the mixed-use addition to the former Putnam Block currently under reconstruction. Over the next five to eight weeks, class participants — in addition to their daily duties at the project site, which include demolition and framing work — will build the shed, gaining skills and experience that may help them secure promotions in the future.

The completed shed eventually will be raffled off, and the proceeds will be put toward tool packages for the workers who built it, according to a news release.

Ahern emphasized to the class the importance of developing a literacy with architectural, structural and other types of drawings used in construction projects. "If you learn this language in this business, you're going to get ahead," he said.

After a primer and quiz on the drawings, workers started measuring and cutting materials for the shed's floor system. They'll build walls the following week, Ahern said.

"This is a good thing," said Rod Inman, a project foremen assisting with the training, which he described as benefitting both the company and the workers. "If we can turn them into carpenters, not just laborers ... we'll get a better product [and] they'll make a better wage."

Class participants said they appreciated the opportunity to learn tricks of the trade while working on a prominent project in the community.

"I finally feel like I'm doing something with my life," said Michael Riley, 26, of Hoosick Falls, N.Y.

The first phase of the Putnam Block project, supported by an array of public and private funding sources, involves the overhaul of three historic structures — the former Putnam Hotel and the adjacent courthouse and Winslow buildings — to accommodate retail, office and housing spaces. Vermont Gov. Phil Scott and other officials attended a groundbreaking ceremony for the project in August.

M&S Development is the project's development consultant, and Stevens & Associates is the lead design firm.

Bread Loaf continues to welcome skilled workers for interviews at the site. For more information, contact Ryan Ahern at rahern@breadloaf.com.