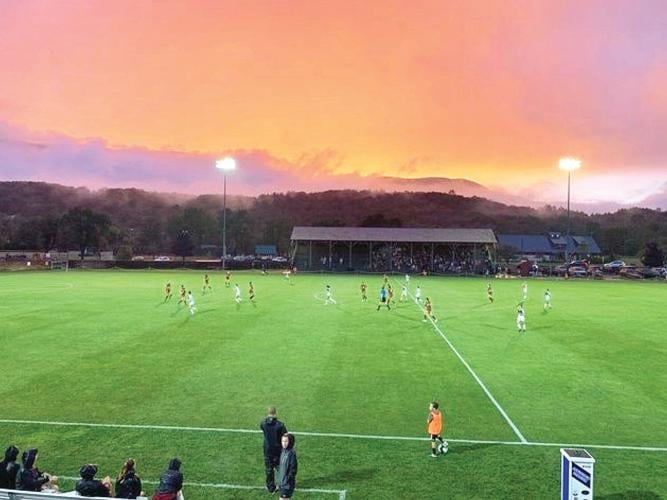 The Boston College and University of Vermont women's soccer teams kick off the Manchester Soccer Series this past Saturday at Applejack Stadium. 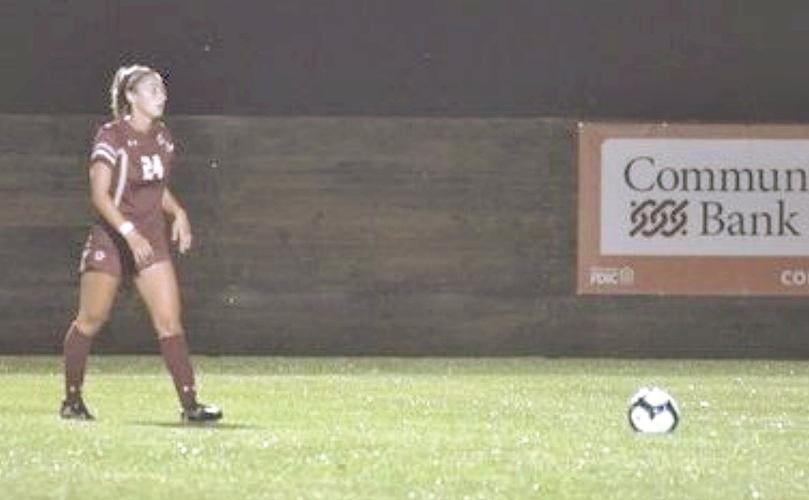 Boston College's Mia Karras prepares for a free kick during the Eagles' scrimmage against UVM Saturday at Applejack Stadium.

The Boston College and University of Vermont women's soccer teams kick off the Manchester Soccer Series this past Saturday at Applejack Stadium.

Boston College's Mia Karras prepares for a free kick during the Eagles' scrimmage against UVM Saturday at Applejack Stadium.

Both teams had nine minutes to relieve game jitters before the refs had to pause the game due to lightning. A torrential downpour postponed play for an hour, but roughly 100 spectators stuck it out to witness the clash between two teams that compete in the Atlantic Coast Conference (BC) and America East (UVM) Conference.

Just three minutes after slippery play resumed, senior defender Erin Convery put Boston College on the board. The Eagles continued to dominate possession on both ends of the pitch following Convery's goal.

The Catamounts struggled to connect passes on the offensive end which allowed the Eagles to extend their lead to 2-0 with four minutes left in the first half. Junior defender Mia Karras sent a beautiful ball from the right defensive end to the top of the penalty box, which freshman midfielder Samantha Agrestic slipped past the UVM goalkeeper with composure under pressure.

Nine minutes into the second half, the Eagles created a 3-0 lead when freshman midfielder Sam Smith finished an easy volley in front of the net following a shot deflection.

With the UVM attack working more as a unit in the second half, freshman forward Nicky Constant managed to put the ball in the back of the net during a chaotic scrum in front of the goal. Constant's goal would be Vermont's lone goal of the contest.

Vermont has played in the Soccer Series for all four years of the event's existence and the beauty of the Applejack venue keeps them coming back.

"We also realize that we're the state university, and we're up north, so it's just a really nice opportunity for us to get down to the southern part of the state and provide an opportunity for the fans to come watch down here," said UVM coach Kristi Huizenga.

Huizenga acknowledges Boston College as one of the top opponents in the country, which was a big test for a young squad.

The game was a learning experience for the Catamounts and a chance for the team to gel before the regular season starts.

"We are definitely proud of how they played," Huizenga said.

She also noted the good sportsmanship and talent both teams displayed to inspire young female athletes in the crowd who aspire to play soccer at the collegiate level.

Saturday was the Eagles' debut playing at Applejack as head coach Jason Lowe enters his first season at the helm of the Boston College program.

He and Huizenga are good friends, and when the opportunity to play in Manchester arose, he knew it would be a good test for the Eagles.

Their main focus of the game was ball movement and switching the point of attack.

"We scored some goals from a few different people, so that went well. But we were still too slow at times, and our square balls got the best of us, so we have to clean up some of those bad habits," Lowe said about his team's performance.

Three Vermont residents are on the Catamounts roster.

Junior midfielder Ella Bankert, of Cuttingsville, thought it was awesome to play Manchester with the support of her friends, family and the UVM community. "It's just really cool to know that I'm representing Vermont because there are not a ton of Vermonters playing college soccer," she said.

The UVM men's team will battle Boston University at Applejack Stadium on Tuesday at 5 p.m. for the second game of the Manchester Soccer Series.