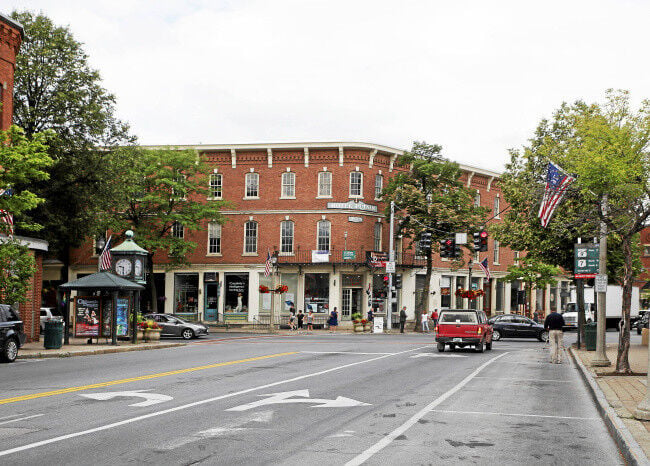 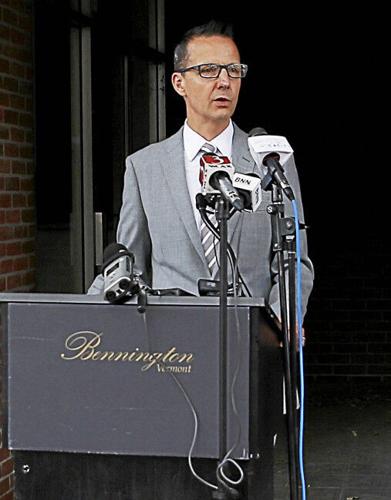 Bill Colvin of BCRC announced the pending purchase of the Greenberg block, and plans to revitalize the downtown area, which he says will attract new businesses and revenue. 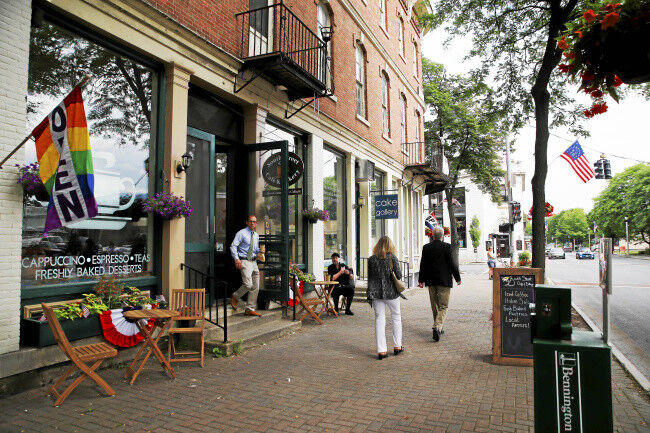 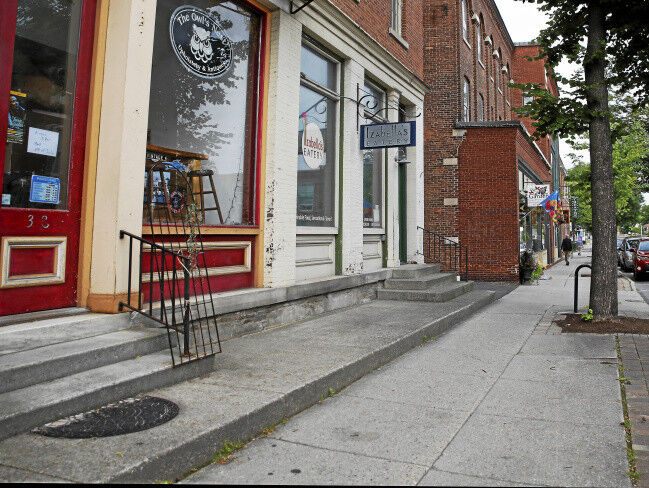 Plans for transformation to the downtown of Bennington involves four acres of land that include the Putnam Hotel, the Old Courthouse/Pennysaver, the Winslow Building, Oldcastle Theater, Greenberg's, and the Mobile Station.

Bill Colvin of BCRC announced the pending purchase of the Greenberg block, and plans to revitalize the downtown area, which he says will attract new businesses and revenue.

Plans for transformation to the downtown of Bennington involves four acres of land that include the Putnam Hotel, the Old Courthouse/Pennysaver, the Winslow Building, Oldcastle Theater, Greenberg's, and the Mobile Station.

BENNINGTON — A group of investors has agreed to purchase the Greenberg block in downtown Bennington with the intention of renovating it for multiple uses.

The group, called the Bennington Redevelopment Group LLC, has a 90-day window to conduct environmental assessments, surveys, and title work before finalizing the purchase, which includes the former Putnam Hotel, the Old Courthouse and Pennysaver, the Winslow Building, Oldcastle Theatre, the former H. Greenberg and Son Hardware, and the Mobil Station. The Sunny Side Diner property, as well as other properties owned by the Greenberg family on the west side of Washington Avenue, are not included in the purchase agreement. The group is made up of several community organizations, including the Bank of Bennington, Southwestern Vermont Health Care, Bennington College, Southern Vermont College, Global-Z International, Brian McKenna, Anthony and Jacqueline Marro, and other "community professionals," who were not specified.

"We're delighted to announce that a consortium of local business leaders, institutions, and civic-minded investors has organized together to transform the block of historic buildings at the Four Corners of Bennington into a vibrant mixed-used downtown space with in-town living, offices, restaurants, and retail," said Bennington County Regional Commission Assistant Director Bill Colvin at a press conference announcing the proposed deal on Tuesday. He said the group anticipates that it will take 12 to 18 months, after the initial 90-day window, to design and develop the project.

"Success," he said, "will require support from the town of Bennington, the state of Vermont, and tenants who are willing to be part of the transformation of downtown Bennington."

"This project offers a significant economic benefit to our community," he continued, "Just as important, however, is the positive impact a successful project will have on our collective psyche. There may be no more iconic buildings in Bennington than those at the Four Corners of our downtown. Revitalizing them will result in a tremendous boost in community morale. This is a project about which Bennington can feel proud. This is a project that represents the very best elements of a community coming together to support and improve itself. It is the hope of the (BRG) that this Putnam block redevelopment will jumpstart a whole new wave of investment in our town."

"Our group first met about a year ago," said Jim Brown, CEO of Bank of Bennington, "We had a common understanding that Bennington was struggling and something needed to be done to change that. We also had a belief that private investors would have to lead that with a civic mindset in order for it to be successful. It didn't take long for us to recognize that the Putnam Block and its redevelopment was the transformative project that needed to happen in Bennington to change the momentum."

Bennington Select Board Chairman Tom Jacobs was also present for the conference. "This is a special day for Bennington," he said, "This project does not come without risk, but the greater risk is not doing this project. That's why we have to move forward as a community to support this wonderful group of individuals and institutions. I can speak for us, the town manager, the entire town management, and the board. We are going to use what resources that we can bring to bear to make this happen in short order, because this is the iconic heart of the community, and by dealing with this part of our community, the entire community is going to be more vital than it was yesterday."

"President (Mariko Silver of Bennington College) and I, representing private higher education in the town, recognize strongly that an attractive and vibrant community is vital to the success of our institutions," said Southern Vermont College President David Evans. "As relative newcomers to town, both she and I recognize the tremendous potential in Bennington, the amazing assets, the lovely natural setting, the engaged culture here in town... We certainly share in the great hope that it will be a transformative moment, not just for downtown, but for the entire community, and we look forward to participating as we go forward."

Colvin said the group will work with current tenants of the properties, but also has a list of potential tenants to fill other space in the building, including many of the institutions that are involved in the Bennington Redevelopment Group. He said a hotel is not currently envisioned to be part of the project.

"We think that by activating these spaces with residential, it will help to drive some of the other uses," said Colvin, "We have a preliminary market study, which indicates that residential is probably the easiest of this to fill, followed by institutional uses, with retail and restaurant being the heaviest lift. But we believe that having additional people living in downtown, additional office workers in and around downtown, will help to convince those retail and restaurant folks to join the project."

Colvin thanked the Greenberg family for working with the group throughout the process, and for displaying a willingness to sell the six properties as a block, saying, "We hope they feel the final project is something that fits with and furthers the legacy this family has created in Bennington."

He described the funding for the project as a complex combination of debt, grants, and equity. He said that, while many aspects of the project are still in flux, the total cost could be around $20,000,000, but said that was an early estimate, and the number was expected to change. The group is working with M&S Development of Brattleboro to manage the financing of the project, and will utilize local and state resources to apply for grants from the Community Development Block Grant and the Vermont Downtown Program. The project qualifies for New Market tax credits and Federal Historic tax credits.

Eric Peterson, producing artistic director at Oldcastle, one of the block's current tenants, said in a release, "Oldcastle Theatre Company is extremely excited to be part of this major development project. It will bring new business and new energy and is exactly what is needed for Bennington to achieve its potential. A revitalized downtown will enable the theatre to continue growing; attracting audiences from New York State, the Berkshires, residents and tourists. This is the 'home run' change that Bennington needed."