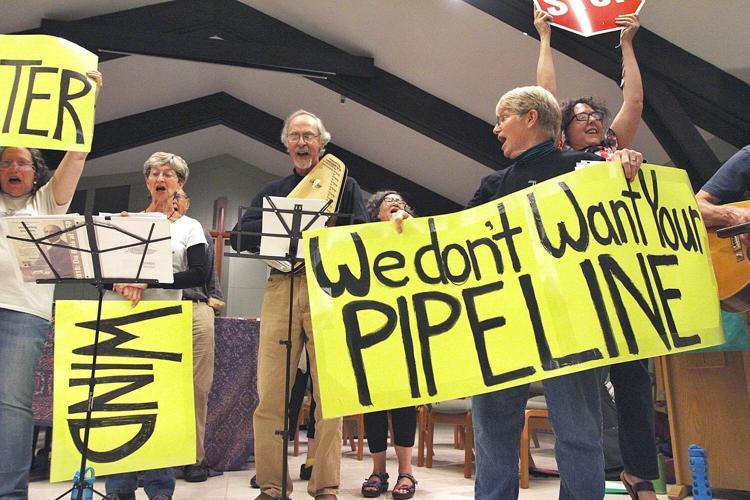 Kay Rice holds up a protest sign during the Hoping Machine's rendition of "We Don't Want Your Pipeline" at Second Congregational Church in Bennington Saturday. 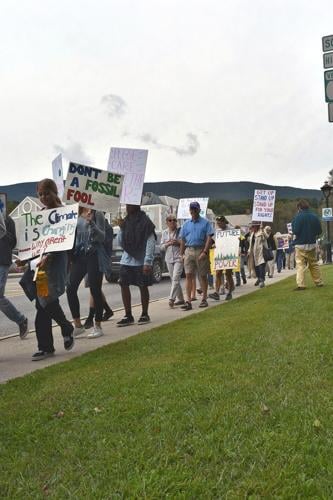 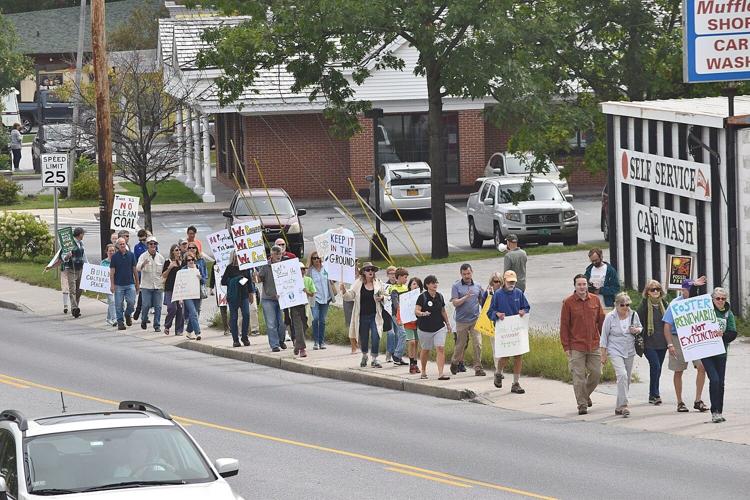 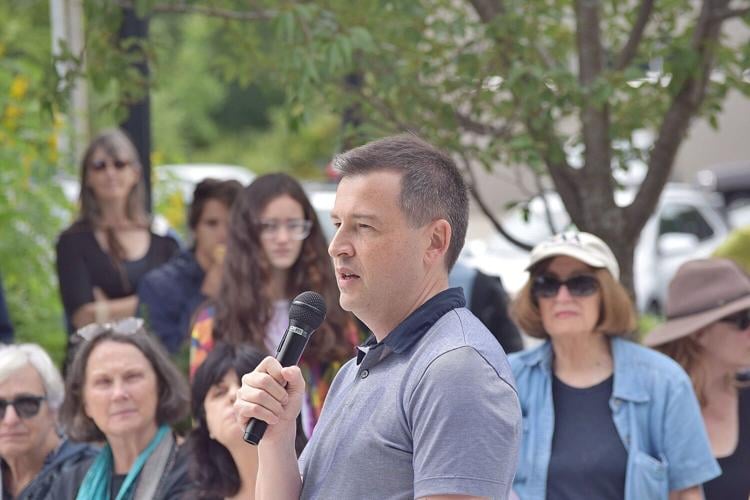 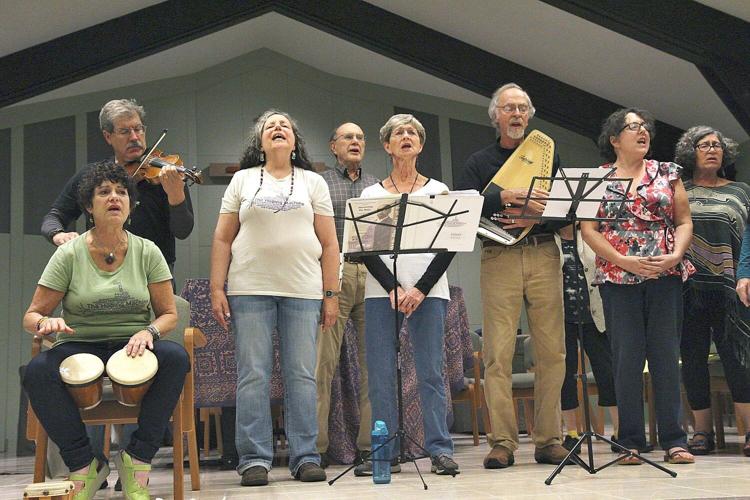 The Hoping Machine musical and activist group out of Great Barrington, Mass. performs during the Rise for Climate, Jobs and Justice event held by the Bennington Climate Advocates of 350 Vermont at Second Congregational Church on Saturday. 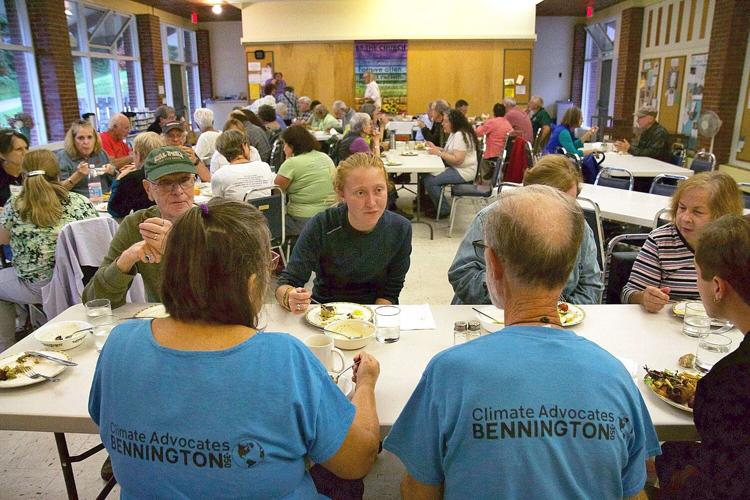 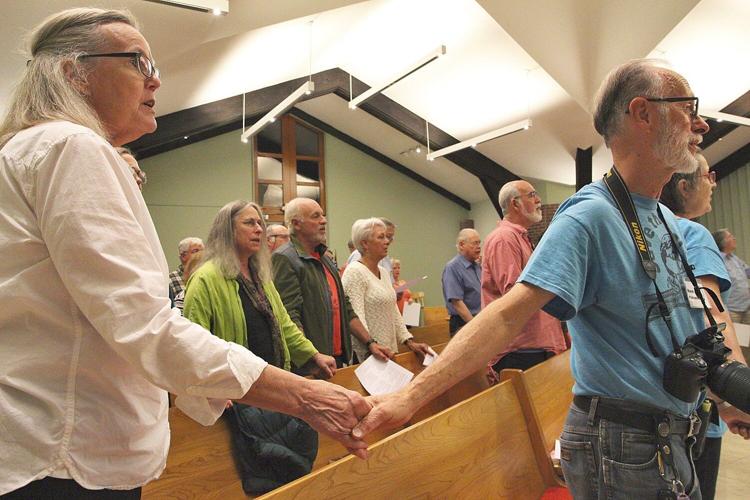 Bennington Climate Advocates of 350 Vermont coordinator Barbara True-Weber, left, holds hands with Pownal resident Marsh Hudson-Knapp, right, as they and dozens of others sing "We Shall Overcome" at the Rise for Climate, Jobs and Justice event on Saturday.

Kay Rice holds up a protest sign during the Hoping Machine's rendition of "We Don't Want Your Pipeline" at Second Congregational Church in Bennington Saturday.

The Hoping Machine musical and activist group out of Great Barrington, Mass. performs during the Rise for Climate, Jobs and Justice event held by the Bennington Climate Advocates of 350 Vermont at Second Congregational Church on Saturday.

Bennington Climate Advocates of 350 Vermont coordinator Barbara True-Weber, left, holds hands with Pownal resident Marsh Hudson-Knapp, right, as they and dozens of others sing "We Shall Overcome" at the Rise for Climate, Jobs and Justice event on Saturday.

The Bennington woman said she used to work as an environmental specialist for a private engineering company, delineating wetlands for development, when her conscience - the one that valued the natural environment - spoke up.

"I was kind of on the wrong side of the fence," Alexander said. "It was bothering me ethically."

She's since been looking for a citizens group to join and maybe write advocacy letters for, which is why she was among the 50 or so people who attended a potluck, sing-along and documentary screening hosted by the Bennington Climate Advocates.

The local branch of the climate justice organization 350 Vermont hosted one of many events held across the country and abroad as part of the "Rise for Climate, Jobs and Justice" campaign by 350.org.

The nonprofit group, founded by Middlebury author Bill McKibben and others, wanted to call attention to the Global Climate Action Summit on Sept. 12 in San Francisco.

The coordinator of Bennington's get-together, Barbara True-Weber, said the Bennington Climate Advocates group aims to stop the use of fossil fuels that emit heat-trapping greenhouse gases and move to cleaner energy sources.

While the group has been in existence for about five years now, True-Weber said that lately, she and others have felt a new urgency as the climate increasingly appears to be in crisis: ice sheets continue to melt, extreme weather events are becoming more frequent and the previous three years have been the three warmest on record.

The group has been fairly active over the last year. In April 2017, Bennington Climate Advocates and Bennington College students bused down to Washington, D.C. with handmade, paper mache bees to participate in the People's Climate March.

Several months later in October, the group protested outside TD Bank to pressure the company to divest from the fossil fuel industry.

The past March, Bennington Climate Advocates successfully lobbied for the passage of a climate resolution at Bennington's town meeting. The nonbinding referendum urged the Vermont legislature and governor to pass a law that commits the state to 90 percent renewable energy use by 2050.

And on Saturday, the potluck was the best-attended event the Bennington Climate Advocates has ever put on.

Sarah Fadem, a junior at Bennington College, was among those eating a plate of potluck because, they said, climate change isn't an issue confined to their campus' environmental club.

"I really enjoy getting out into the community," they said.

And, Fadem added, it's nice to not feel alone when you're concerned about your planet.

"I don't think any of us would be able to keep up morale if we didn't have community events like this."

Cindy Hudson-Knapp, a Pownal resident and member of the Bennington Climate Advocates, sat across from Fadem and agreed that the local 350 chapter's monthly meetings were almost like a support group.

"Sometimes you're like, here we are in little Bennington, Vermont - how are our efforts going to make a difference?" Hudson-Knapp said. "To know that we're part of a national movement, I think that's empowering,"

Following the potluck, the "Rise for Climate" event attendees filed into the Second Congregational Church's sanctuary, filled the pews and sang along with the Hoping Machine, a musical and activist group founded by Sarah Guthrie and based in Great Barrington, Mass.

The social justice songs ranged from upbeat and defiant - "We Don't Want Your Pipeline," in which the performers held up protest posters and a stop sign - to solemn and sad.

Everyone stood, joined hands and swayed during "We Shall Overcome."

Following the music, True-Weber set up the film The Reluctant Radical, which documents the efforts of environmental activist Ken Ward.

The filmmakers cut between Ward's nonviolent, direct action - holding protest signs outside Exxon-Mobil gas station pumps in Oregon, using a lobster boat to block a coal ship from docking along the New England coast, and cutting through chain-links before turning off an oil pipeline valve in Washington state - and his painstaking sweeping, painting, and tree-pruning at his home.

"Knowing we have a crisis and having nothing to do about it creates despair," Ward said in the film. "Direct action creates moral clarity and conflict. That's what we need."

It was past 9 p.m. by the time the film finished, and just under a dozen people lingered in the pews to talk with the Bennington Climate Advocates about the kind of nonviolent, direct action they could take locally.

Diana Gradus of Hoosick Falls, N.Y. expressed interest in a petition to ban plastic bags in Bennington, which the group handed around on a clipboard Saturday night.

"I have a one woman campaign," Gradus said, adding that she tells people everywhere to stop using plastic bags. "I would love to do it in an organized way."

True-Weber said Bennington Climate Advocates has discussed as a group whether to provide nonviolent, direct action training for more than a year.

"I think it might be appropriate now," she said.

Naomi Miller, a Shaftsbury resident who has been arrested three times in the past for nonviolent, direct action, said the trick was not only the training, but finding where and when that action could be most effective.

"We just have to figure out where in the machine to throw a cog in the wheel," Miller said. Once that's decided, she added, "It doesn't take that many bodies to disrupt."

A march in Manchester

In Manchester, about 85 people attended a march from Factory Point Town Green down Depot Street and back again to the main roundabout for a rally. They heard from Edward Cameron of Manchester, one of the writers of the Paris climate agreement, and from Kathleen James, a candidate for the Bennington-4 seat in the state House of Representatives.

Cameron and James both said climate change presents an immediate need for change, and an opportunity for Vermont to take a leadership role and create good-paying green economy jobs.

Cameron stressed the need for citizens to engage in the political process to change U.S. policy on climate change.

"Democracy does not work through marches. Democracy works through voting.

"If any of you marched and then don't show up to vote I don't want to see another placard in your hand ever again," Cameron said. "if you really are serious about this issue then you have an obligation to be serious about engaging in the political process. "

James, invited to speak by organizers, said Vermont should transform its transportation infrastructure by offering incentives for electric vehicles, build infrastructure to recharge those vehicles, and double down on public transportation. She said the state should install high-efficiency heat pumps and wood burning heating systems in public buildings, and expand eligibility for home weatherization.

"This is what our elected leaders at the town state and federal levels should be focusing more clearly on," she said. "Vermont can and should lead the way on this issue, and if does, imagine the possibilities."

Greg Sukiennik contributed to this story from Manchester.