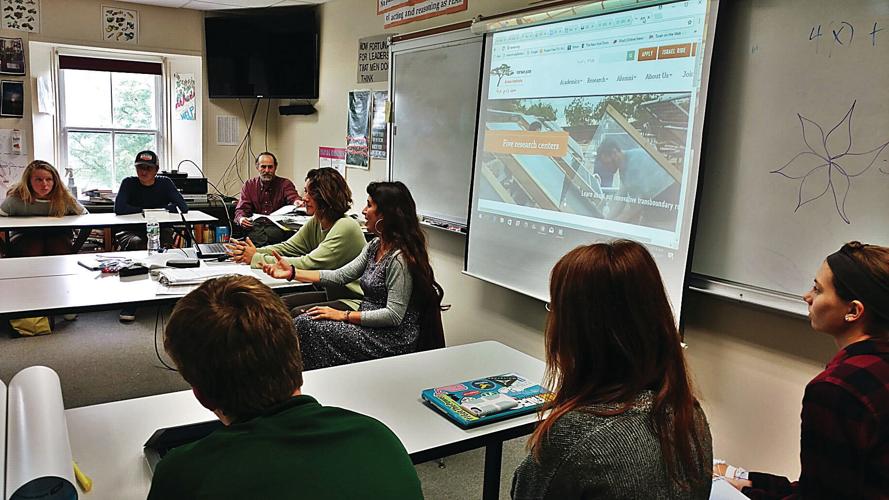 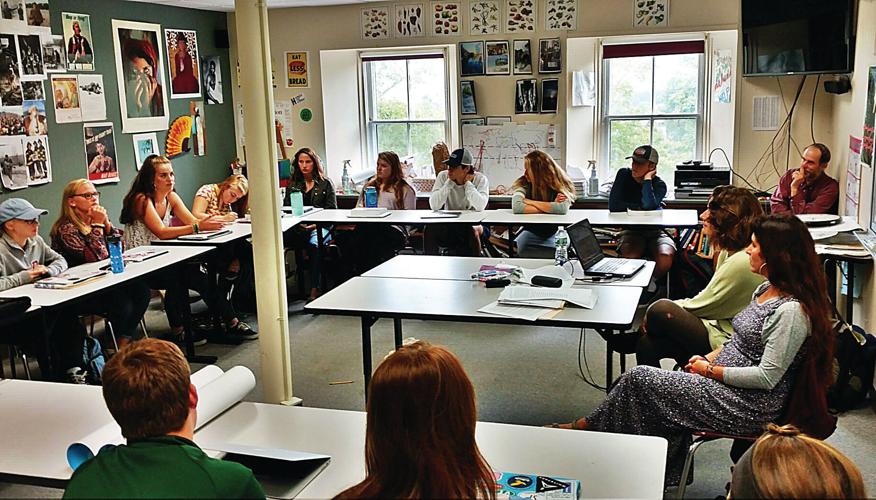 Student Grace Braddish questions Iwan and Tendler on their experiences with the Arava Institute.

Student Grace Braddish questions Iwan and Tendler on their experiences with the Arava Institute.

MANCHESTER — For many high school students, conflict is an unavoidable facet of teenage life. Resolving those conflicts, however, isn't something students are typically trained for.

Manchester's Rabbi Michael Cohen hopes to change that in his Conflict Resolution class, a Bennington College course he regularly offers at Burr and Burton Academy.

Cohen's lessons come not just from an academic vantage point, but also from the Rabbi's experience with the Arava Institute for Environmental Studies, a study abroad program that grapples with the issues surrounding the Israeli-Palestinian conflict on site.

At Cohen's introductory class on Tuesday, students were joined by two alumni of the Arava Institute; Agustina Iwan of Argentina and Eve Tendler of Israel.

"Obviously this is a class on conflict resolution, and what's nice in having these two alumni from the Arava Institute is that it puts a face to a conflict that we will be studying in a couple of weeks," said Cohen. "As a number of students have commented here, lessons there are applicable here as well."

While the class was supposed to be joined by a third alumnus of the Arava Institute, Cohen explained a last minute change of plans for the Palestinian guest.

"He decided to seek refugee status in Canada," said Cohen. "We have actually not heard from him yet this morning, so we don't know what happened."

The absence provided a powerful illustration of the human costs of conflict, and the resistance that those working for peaceful resolution often face.

"What we've seen in the past couple of years of the conflict is something called anti-normalization, and because of the frustration of the Palestinians, one of the ways they're resisting is criticizing anyone who works with Israelis," said Cohen. "This particular student has been very active in working not just with the Arava Institute, but also other projects trying to bring peace to that area of the world. It's become too uncomfortable for him to come back home."

Recognizing the compelling absence of one of their guests, the class utilized the opportunity to briefly discuss the global refugee crisis and how inextricably linked to conflict that issue is.

The students then began to explore the facets of resolution, through the lens of their guests experiences.

"The lessons are transferrable here," said Cohen. "That's where these kind of conversations can be really helpful and important."

Students questioned Iwan and Tendler on their own experiences with, and perceptions of, conflict, as well as their work within the intensive Arava Institute.

"Do you find that people are really connected to one narrative when they come to the Arava institute?" asked student Cecilia Szkutak.

"It's easy to agree with people who think like us, even if we think we are open minded, but that's the easy way," said Iwan, explaining that while people do bring their own differences to the program, many recognize their similarities over time as well. "There is a difference, but there are still similarities."

Cohen explained that participants in the Institute were given the time to learn about each other on a personal level, which is integral in fostering understanding.

"The luxury of time allows for trust to be built, and when you trust somebody you can disagree with them," explained Cohen. "Here in the United States, something we've lost in our political conversation is trusting someone who you disagree with."

Building that trust within any dialogue is one of the lessons Cohen hopes his students walk away with, along with the ability to recognize the humanity in those that disagree with them; politically or otherwise.

"In the end it's human beings trying to live together," said Iwan. "Each one has the necessity of being recognized in their own nationality or in their own identity."

Though this capacity is integral to finding peace on personal levels and beyond, it is not always an easy task.

"Both sides are traumatized, and the trouble with them recognizing the trauma of the other is because both sides caused the trauma to that other side," said Cohen, relating the struggles faced by many Arab and Israeli participants in the Arava Institute. "That's the catch that both sides are in, because they have to ask really hard questions of themselves."

While the institute is composed of Israeli students and Arab students, the final third are international students from across the globe. Noting this, Tendler turned to the students with a question.

"Why do you think this program draws international students, when there is so much focus on this particular conflict?" she asked the group, who will soon learn about these issues from a similar vantage point.

"I think a lot of what you're talking about is education," said Szkutak. "It is bringing back that knowledge and trying to push those around you to find resolution."For the class, it was a unique start to a semester of difficult lessons.

"I think it was important to bring the two alumni from the Arava Institute to the class since it puts a real face and presence of what we read about," said Cohen. "Broadening the horizon, getting the big picture, and the nuances of a conflict also contain lessons that can be used here as well."