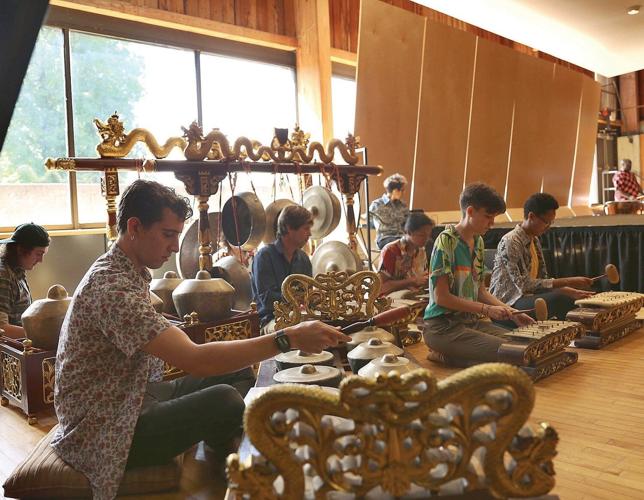 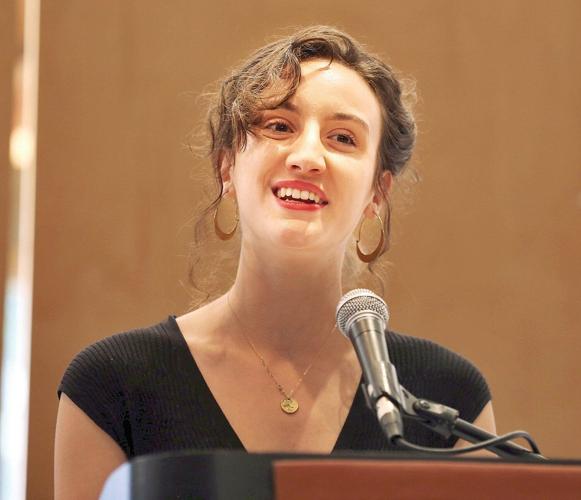 BENNINGTON — A cascade of chimes and reverberating drum beats greeted new and returning students, faculty and staff to Bennington College on Tuesday, as they filed in for the college's annual convocation ceremony marking the beginning of the academic year.

A group of about 12 musicians struck mallets on long, intricately carved red-and-gold instruments, playing an original piece, "Playon," as the crowd settled in for the ceremony.

The college's convocation, which is open to students, faculty and staff, was held in the Greenwall Auditorium of the Visual and Performing Arts Center (VAPA).

Isabel Roche, interim president of the college, welcomed those in attendance.

"To those of you who have just arrived, again, our warmest welcome," she said. "We are so happy to have all of you here today. And I hope that these first few days have been exhilarating."

The college, she said, has much to celebrate on campus this fall, including the re-opening of the Commons building after its "spectacular renovation."

"We talk a lot about community here," she said. "Because education is a shared enterprise. Bennington chose all of you, and you, each of you, chose Bennington, students, faculty and staff alike."

The college's health relies on a sense of trust, and shared commitment and responsibilities, both in times of celebration and difficulty, she said.

"We are not only here together — we make Bennington together," she said.

The college's guiding principles are not merely "lofty abstractions," she said.

"I see, and we see, Bennington students at work on campus and in the world every day who are guided by these principles," she said. "They are artists, scientists, activists and innovators, all building a better world than the one they came into."

"We are living in an exceptionally fraught time," Meffert said. And students are uniquely positioned to leverage their numbers and perspectives to bring change, she said.

And Bennington College students are doing that every day, she said.

"Your incredible classmates are advocating for immigrants' rights, supporting local high school students to become the first in their families to go to college, representing their countries in international governing bodies and making music, poetry, art and dance that explores what it means to be alive at a time like this," Meffert said.

Students also stand with their faculty and staff, she said, who share their passions for organizing and making change.

She encouraged those in the audience to get involved in order to make an impact.

"You can sit back and complain, or you can step up and do something about the issues and injustices you see," she said. "As a Bennington student, protest and change-making are you inheritance. We are not a people who sit quietly, and I love that about us."

Beyond idle talk, there are many ways to make your voice heard "for real," she told the students, including groups on campus for educational mentorship, environmental justice, low-income or first-generation students, and others.

"If you see a gap in our student organizations, I hope you create your own," Meffert said.

Every student at Bennington is here because they're change-makers, who are seeking a meaningful education, she said.

"We will respect each other here, and respect our rich, diverse and different knowledge systems," she said. "We all have so much to learn from each other. Lead from curiosity, not competition. I look forward to learning from you."

Faculty member Rage Hezekiah, first-year and international student adviser, began her speech by reflecting on her path to Bennington College.

She went to a small college in New Jersey, worked on an organic farm in California, co-owned a bakery, worked as a doula, taught college poetry, and, she said, landed at Bennington.

"In my daily work with students, I'm inspired to hear about your explorations at Bennington, and the unexpected leaps your work is taking," she said. "I'm also honored to be trusted to hold the space for you when things are hard."

She described her own journey settling in Vermont as a queer person of color, including a trip she took with her wife when their car battery died, and the only person around was a man with a Confederate flag emblem on his truck.

He didn't know how to use jumper cables. But, she said, he was helpful and kind.

"I tell this story in part because it's crucial that we give each other the benefit of the doubt," she said. "When I think about what has made it possible for me to make this part of the country my home, it's my willingness to believe that we are each doing our best, and that kindness is one of the most important gifts we can give to each other."

She said she also remembered how her neighbors trekked up her winding, dirt driveway after she and her wife bought a house, just to give them a pie and welcome them.

"I was blown away by this act of kindness," she said. "When I think about making my home here, these are the experiences that stand out."

She said she sees Bennington students as people who are willing to speak up, ask questions and hold each other accountable, and it's a privilege to learn alongside them.

She closed with a quote by the late author Toni Morrison.

"This is precisely the time when artists go to work," she said. "There is no time for despair, no place for self-pity, no need for silence, no room for fear. We speak, we write, we do language. That is how civilizations heal."

John Bullock, interim provost, spoke to the students about the college's faculty.

"They are scientists and musicians, writers and philosophers, artists and anthropologists," he said. "Many of them are a few of those things — innovators at the interfaces of fields that don't often connect."

They help their students forge unique paths, he said.

"They won't tell you what to do, or how to do it," he said. "Under their guidance, you will identify which problems you want to address in the broader community and world, what mysteries you feel compelled to explore; and what you want to create that didn't exist before. The answers to those questions will define your education."

Bullock introduced Dina Janis, drama faculty member. A few years ago, Janis said, one of her students to put together a list of unique phrases she often said — including one of her classics, "do the do."

"Doing the do is all about the doing, not about the result," she said. It's about taking the leap of faith, and being willing to make a fool of one's self.

At Bennington College, inquiry is not theoretical, but active, she said.

"There is no substitute for time on your feet, actually doing the thing, rather than thinking about doing it," she said.

Some, she said, will find that they feel out of place or like an imposter at the college, as she has.

"Some of us barely made it here and are going to have a heck of a time staying put," she said. "Not all of us arrive at this beginning with the same sense of confidence or entitlement. To those of you in particular who may feel this way, I encourage you to not be afraid, but instead to seek allies and insist upon support. This place is meant to be used, by you."

The college is filled with people who are happy to "walk the walk" with those who need help, as others have done for them, she said.

"Bennington can be both terrifying as well as a sanctuary," she said. "Trust that you will find your unique way through and make it your own somehow. Throw out the alarm clock on the results — but don't wait for the right time to begin."