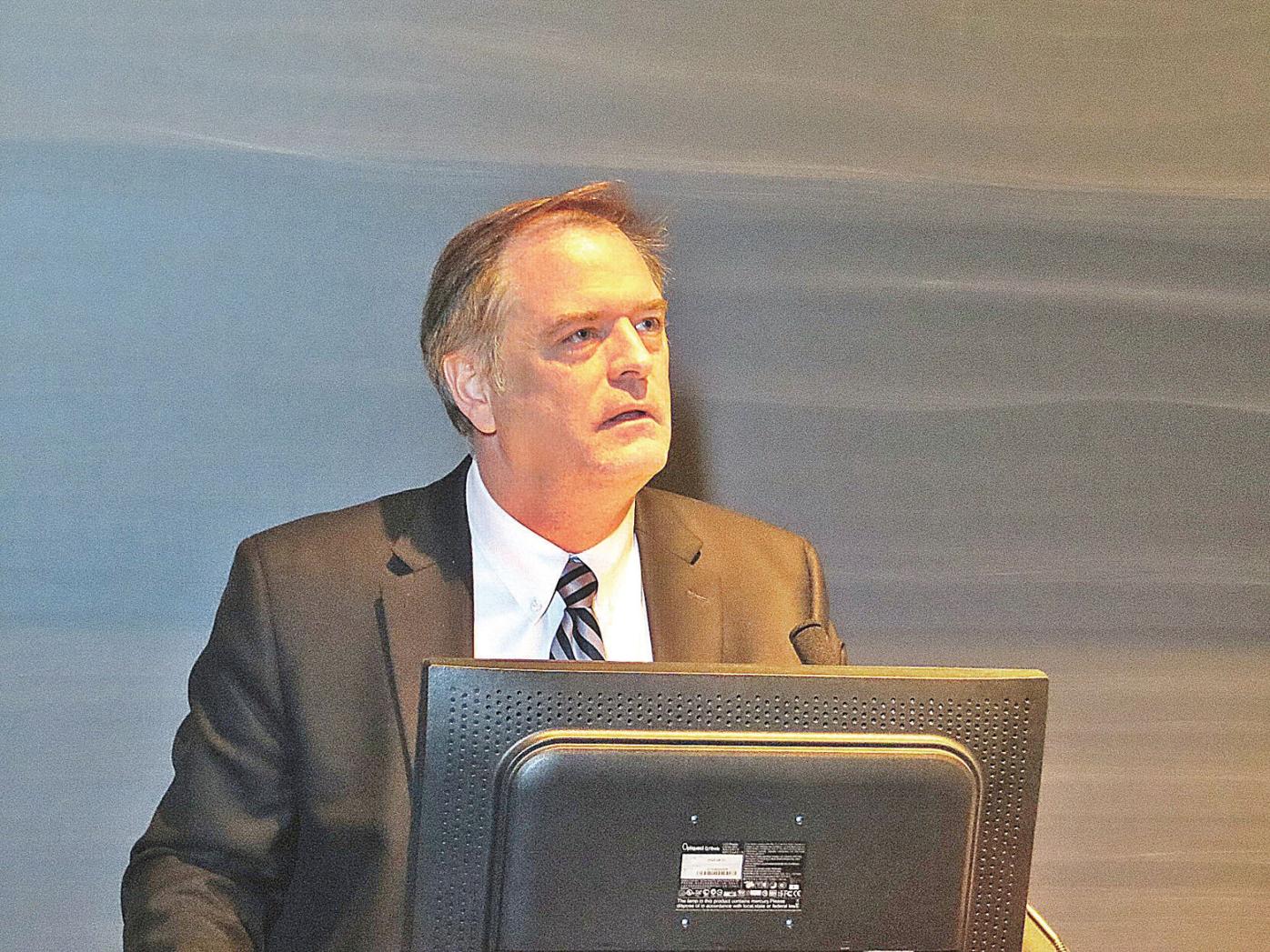 Attorney Rob Bilott was the keynote speaker Saturday during a conference at Bennington College on PFOA issues. 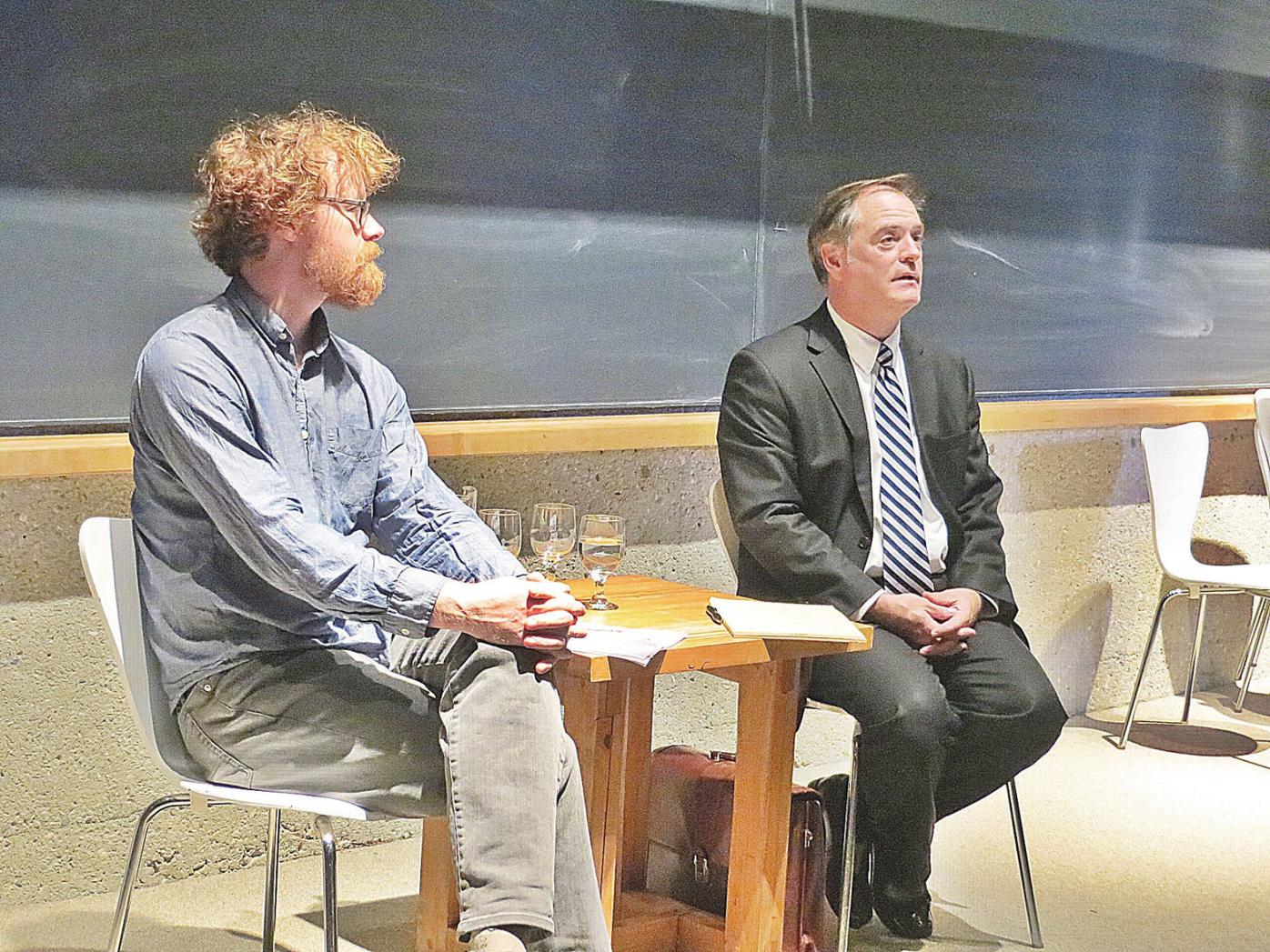 Attorney Rob Bilott, right, led key class-action legal efforts against DuPont over PFOA contamination in water supplies, was the keynote speaker Saturday at a conference at Bennington College on PFOA issues. At left is David Bond, associate director of the Center for the Advancement of Public Action at the college one of the organizers of the two-day conference.

Attorney Rob Bilott was the keynote speaker Saturday during a conference at Bennington College on PFOA issues.

Attorney Rob Bilott, right, led key class-action legal efforts against DuPont over PFOA contamination in water supplies, was the keynote speaker Saturday at a conference at Bennington College on PFOA issues. At left is David Bond, associate director of the Center for the Advancement of Public Action at the college one of the organizers of the two-day conference.

BENNINGTON — When attorney Rob Bilott first encountered the term "PFOA" in a document, he had to look it up. That is, he attempted to find factual information about the man-made chemical but found very little.

Bilott, who gave the keynote address Saturday during a two-day conference on PFOA issues at Bennington College, said what stood out about 17 years ago was a dearth of study data on a chemical that had been widely used in the manufacture of Teflon and other products since the early 1950s.

Today, thanks in large part to legal action Bilott spearheaded over PFOA in drinking water supplies in West Virginia and Ohio, the data base on the suspected carcinogen has expanded exponentially — along with the identification of industrial sites, landfills and water supplies where the chemical has been detected around the country.

"This [conference] is sort of the culmination of what we have been working on for many years," Bilott said, "to see information about this chemical getting out in communities like this, in a free exchange of the facts, of what is known and what isn't known."

Bilott, an attorney with the firm Partner, Taft, Stettinius & Hollister, of Cincinnati, said he had worked in environmental law primarily for large companies, guiding them through regulatory hurdles, before he received a call from a farmer in Pakersburg, W.Va., whose cattle had died after drinking from a stream near a dump site for a DuPont facility that manufactured Teflon.

During his investigations for that suit and for subsequent actions on behalf of residents of that region whose water supplies had become contaminated with PFOA, Bilott said he sifted through stacks of reports from or about the company.

He eventually found internal documents pertaining to previously undisclosed blood testing of DuPont workers and unreported company studies involving animal subjects that had been conducted for years. Those documents revealed a long-standing concern for the effects of PFOA exposure, particularly cancers.

Bilott notified the federal Environmental Protection Agency of the documents, and an investigation followed that led to $16 million in federal fines for the company and an agreement he said was key to collection of medical data on the effects of PFOA and a related class of chemicals, such as PFOS — used in firefighting foam.

Other than the suspected links between PFOA exposure and certain cancers or other diseases or conditions, Bilott said the fact that PFOA was referred to in documents as an extremely stable chemical that doesn't break down quickly in water or in humans, meant it would likely be found at numerous manufacturing, dumping or landfill sites around the country.

DuPont, and 3M, which developed PFOA and provided the material to DuPont factories, had this information decades ago, he said, based on internal company documents, but the companies did not reveal the information. One justification, he said, was that PFOA was not then a regulated chemical.

In fact, research has since shown some level of PFOA can be detected in the blood of nearly all Americans, likely because of the numerous consumer products in use for decades and contamination in the air or groundwater near the manufacturing sites where PFOA was used. Unlike most chemicals, which quickly leave the body, PFOA can take years to dissipate, Bilott said.

While its manufacture in the U.S. has ended, PFOA is being used in other countries, he said, meaning it still could be spread through the atmosphere.

Bilott traced the long legal struggle to not only secure damage settlements from DuPont but to convince the EPA to study and regulate PFOA. It wasn't until last year that the agency set an advisory level of 70 parts per trillion for PFOA in drinking water.

He said he is encouraged, however, in that states like Vermont are setting their own drinking water standards [now 20 ppt] and working to tighten regulation on use of industrial chemicals. He said that in turn has created pressure on the federal government to enact tougher standards and regulation.

Most significantly, Bilott said, he was able to get DuPont to fund a health monitoring study of people living in West Virginia and nearby states where PFOA levels were found in drinking water supplies. Nearly 70,000 people eventually became involved in the long-term study, he said, providing significant data upon which to consider regulation of the chemical and others in same class, or industrial chemicals in general.

"This is information that nobody had 10 or 15 years ago," he said, adding, "A lot of what I have been involved in for the past decade and a half was trying to make sure that what happened in communities in West Virginia and Ohio isn't repeated, so other communities won't have to experience what they experienced."

A perhaps more serious concern that has emerged, Bilott said, is that for PFOA, talk of "any `safe level' is a misconception." He said the chemical can build up on the blood over time, no matter how low the detected level found in water supplies.

"There may not be a really safe level for this chemical," he said.

The monitoring study showed that PFOA levels drop in the blood of persons who've had long-term exposure, but at a slow rate over a number of yours.

Prior to Bilott's address, former Vermont Department of Environmental Conservation Commissioner Alyssa Schuren, and former federal EPA Region 2 Janet Enck, described the responses of officials to the discovery of PFOA contamination in water supplies in the Hoosick Falls, N.Y., area in 2014 and in Bennington in early 2016.

The Vermont response to positive well test results in North Bennington and the subsequent release of information to the public was much more rapid and benefited from the experience in the nearby New York communities, the women said, as well as from the growing body of knowledge about PFOA contamination.

Environmental officials identified the source of the contamination in the New York communities as factories owned by Saint-Gobain Performance Plastics and Honeywell International, and former Comfab Corp. plants in Bennington, now owned by Saint-Gobain. Negotiations toward requiring the companies to fund public water line extensions to affected properties or otherwise provide safe drinking water to affected residents are continuing.

The PFOA conference was organized by David Bond, associate director of the Center for the Advancement of Public Action at Bennington College, and Ken Facin, superintendent of Hoosick Falls Central School District. It was held Friday and Saturday on the North Bennington campus.

Bond said 150 students and teachers from regional high schools attended on Friday, participating in seminars covering the basics of PFOA, from chemistry to hydrogeology to citizenship, and learning how to produce and interpret independent data of PFOA contamination in the environment.

"This conference helped introduce the next generation of citizens, not only to one of the most difficult challenges we've faced — PFOA — but also what we all might begin to do about it," Bond said.

He added, "We brought together impacted communities in New York and Vermont — communities that have rarely had the opportunity to talk to one another — to summarize what we've learned about PFOA contamination, spark new points of collaboration, and advance more equitable paths forward PFOA is not just a Hoosick Falls problem; it's not just a Petersburgh problem, and it's not just a North Bennington problem. It's a regional problem. And it's time we begin thinking and acting together."

Jim Therrien writes for the Bennington Banner and VTDigger.org. @BB_therrien on Twitter.