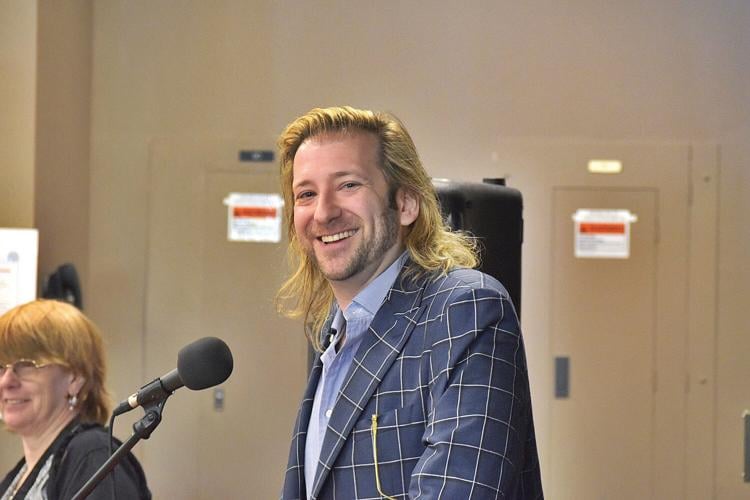 4 Freedoms Festival organizer Joshua Sherman pauses during a light monent at a reunion of the artist's Arlington models on Saturday, July 7. 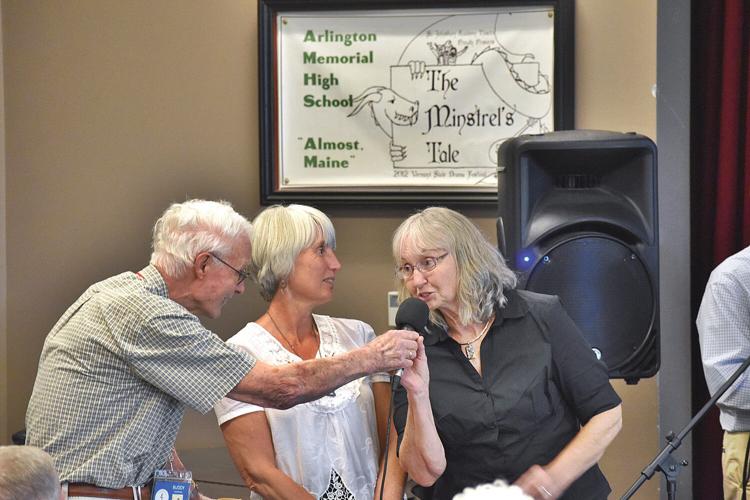 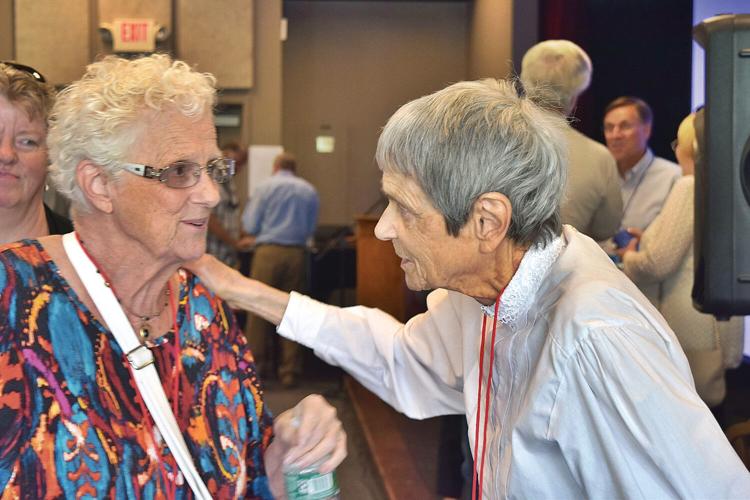 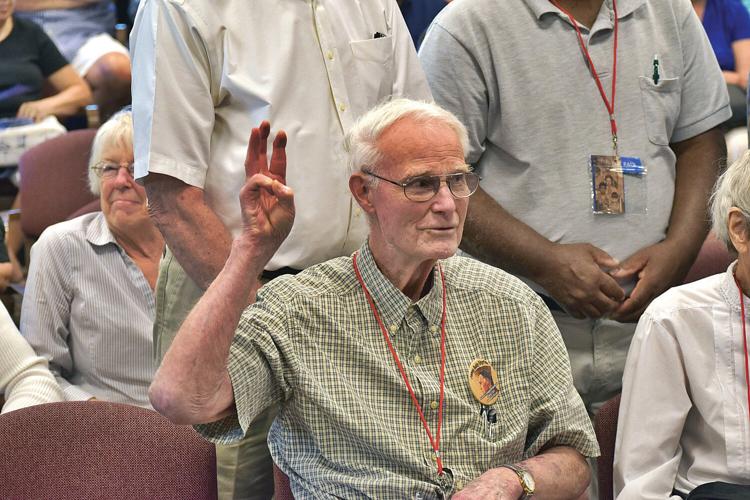 James "Buddy" Edgerton strikes the pose he held for Norman Rockwell in 1964 for a painting for a Scout calendar during a reunion of the artist's Arlington models on Saturday, July 7.

4 Freedoms Festival organizer Joshua Sherman pauses during a light monent at a reunion of the artist's Arlington models on Saturday, July 7.

James "Buddy" Edgerton strikes the pose he held for Norman Rockwell in 1964 for a painting for a Scout calendar during a reunion of the artist's Arlington models on Saturday, July 7.

ARLINGTON — There were two 75th anniversaries being celebrated at Arlington Memorial High School on Saturday — one, marking former Arlington resident Norman Rockwell's Four Freedoms paintings, and another tying back to the farmer who stood in opposition at the town meeting that helped inspire Rockwell's best-known work.

The occasion was a reunion of Rockwell's Arlington models, which drew a standing room-only crowd to the Mack Performing Arts Center at AMHS on Saturday. It was the first official event of the 4 Freedoms Festival, which celebrates the nexus of Rockwell's art, its cultural and social importance, and Arlington's history as the source of the artist's inspiration. Another session featuring several models will be held July 18 at 7 p.m. at Manchester Community Library.

As the event started and guests were welcomed by 4 Freedoms Festival founder Joshua Sherman, the models sat or stood in the first two rows of the auditorium while photographers snapped away with cameras and cell phones. At one moment, they put on the expressions Rockwell had asked them to adopt while sketching them for the illustrations that graced covers of the Saturday Evening Post.

The gathering gave the models the opportunity to reconnect with each other and with family members. Before the session began, Ardis Edgerton Clark hugged her granddaughter Charity Clark of Williston, who was visiting with her husband Rob Lietar and daughter Charlotte Clark-Lietar.

Later, Marjorie Squiers Coulter of Arlington, who with her brother is one of two surviving models out of the 31 appearing in the Four Freedoms, signed the page of a Rockwell book for Troy Mulroy of Arlington.

Coulter, who with her brother David Squiers was one of the two children tucked into bed in "Freedom From Fear," had missed the last model gathering. She was glad to have a chance to meet up with her friends.

"It's nice. It's nice to see everybody," Coulter said. "I'm glad I grew up here and I've always lived here, with the exception of six months in East Dorset."

Two of those models, James "Buddy" Edgerton and Don Trachte Jr., took the crowd on a journey through Rockwell's life and career leading up to the Four Freedoms paintings, and through Rockwell's Arlington, from his West Arlington home and studio to the hill on East Arlington Road where the town's former school had burned to the ground on Nov. 9, 1940.

Trachte said it was Buddy Edgerton's father, James Edgerton Sr., a neighbor and friend of the Rockwells in West Arlington, who stood up at that fateful meeting and set the artist's imagination in motion for "Freedom of Speech."

Only months earlier, Trachte explained, James Edgerton Sr. had lost his entire herd of dairy cattle to a brucellosis outbreak. Government-mandated culling to prevent the spread of the bacteria, found in unpasteurized milk of infected animals, had spared but one heifer on the family farm. No cows meant no milk — and no milk check.

Jim Edgerton Sr. had been an active supporter of education in Arlington, Trachte and Buddy Edgerton explained. But facing economic disaster, he was concerned about his ability to afford the tax increase that would fund a new school. And so he stood up that night and voiced his concern.

Rockwell, who had struggled with finding a way to represent the Four Freedoms through art, suddenly had his image, though it took four tries before he was satisfied with the results. But he didn't use his friend and neighbor James Edgerton Sr. in "Freedom of Speech," despite Edgerton's direct involvement, instead calling on fellow Arlington resident Carl Hess to play the role.

"Norman had his vision of somebody who was Lincolnish. Doesn't that remind you of what Abe Lincoln what be doing, standing up and making his argument?" Buddy Edgerton said of Hess' appearance in the iconic painting.

Representing their mother, Florence Lindsey, a model in "Freedom From Want," were her daughters, Lynne Foerster and Lee Curtiss. They talked about how Lindsey had taken part in the Four Freedoms tour, in which the paintings were displayed in effort to sell war bonds.

They recalled that their mother often spoke of the trip to Filene's department store in Boston as a moment she was proud of the rest of her days. "Being a Rockwell model was an honor for life," Foerster said.

But what about the second anniversary?

Arlington native Ted Hoyt, a Rockwell model and an engineer by trade, explained he had come back to town following his retirement and had volunteered to be the clerk of the works for the renovation of AMHS in the 1990s. While clambering through the attic above what was originally the gym, he said, he found a direct link back to the fateful day when the town voted to rebuild, and Rockwell found his inspiration.

"I was in the upper part of the old gymnasium, which is now the library. And on the third truss I saw a name, and I walked over to it, climbed over to it, really. And it said `James Edgerton Sr., 1943.'"

Buddy Edgerton filled in the gaps in Hoyt's story, and how it came to a happier ending.

"My father lost his herd. There was no milk check. And along came the superintendent of the works building the new high school, so [my father] became a laborer," Edgerton said. "He worked a week and they suddenly found out that farmers really get the job done. So [the superintendent] made him the staging crew leader for the rest of the project.

"So he helped build that school that he voted against."

Reach Journal editor Greg Sukiennik at gsukiennik@manchesterjournal.com or at 802-490-6000.