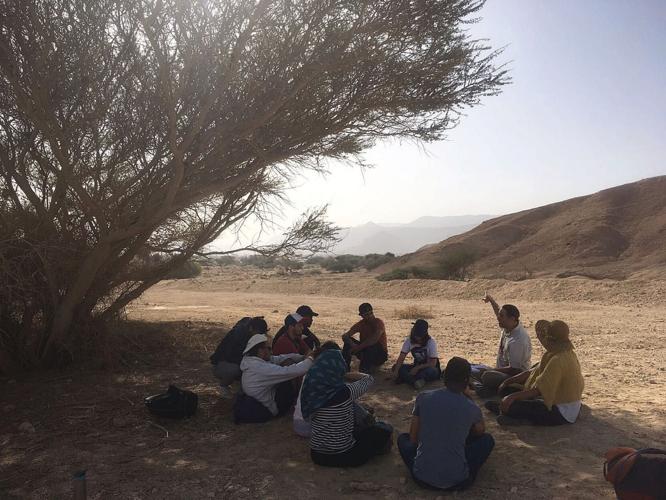 Rabbi Emeritus Michael Cohen teaching his Bennington College course, "The Bible and the Environment," to Israeli, Palestinian, Jordanian, Italian and American students at Yotvata Oasis, just south of Kibbutz Ketura where the Arava Institute is located. 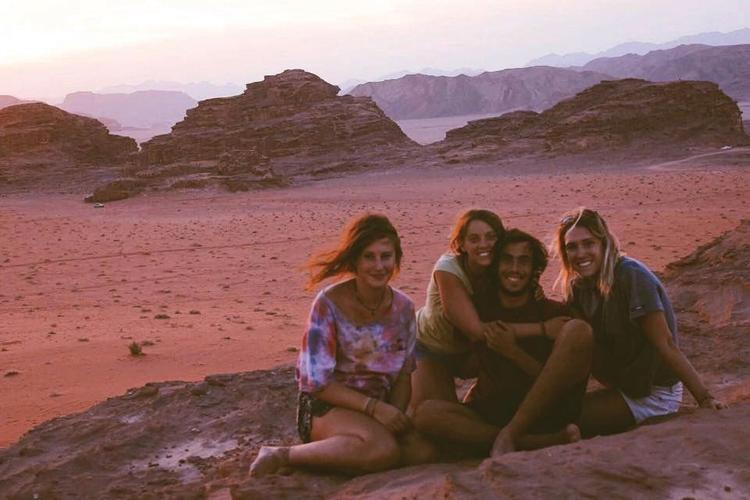 Rabbi Emeritus Michael Cohen teaching his Bennington College course, "The Bible and the Environment," to Israeli, Palestinian, Jordanian, Italian and American students at Yotvata Oasis, just south of Kibbutz Ketura where the Arava Institute is located.

MANCHESTER — For some local students, the first steps on the path to peace begin right here in Manchester.

In the last five years three Burr and Burton Academy alumni have attended the Arava Institute for Environmental Studies, based in Israel, which works to transcend national borders and conflicts in the interest of environmental cooperation.

Michael Cohen, Rabbi Emeritus of the Israel Congregation of Manchester and faculty member at Bennington College, was among the founding faculty of the Arava Institute in the early 2000's.

"The Arava Institute really ties together all of my passions in one place," said Cohen."Arava addresses issues of peace, the environment, and cross cultural learning."

Karolinka Sowulewska, who graduated from Burr and Burton in 2012, attended the Arava Institute as a study abroad program while pursuing a degree in international security from Mount Holyoke College.

"I knew that I wanted some real world experience, and Rabbi Cohen directed me to Arava," said Sowulewska. "I immediately fell in love with their commitment to bringing together Israelis, Palestinians, and Jordanians on such important issues."

The Arava Institute has received immense support, both moral and financial, from the Manchester community. The program has also found support within the Vermont congressional delegation, and has been attended by students from the University of Vermont, Green Mountain College, and Bennington College.

"I think the Arava institute can be very beneficial for someone who chooses to use the experience as a study abroad program," said Cohen. "Often when students study abroad they are isolated with other American students, but at the Arava Institute students get to interact with a really international community and learn about a different region of the world, particularly one facing conflict."

For students, the lessons learned through the Arava institute permeate many aspects of their lives going forward.

"I think it's important to talk about contentious issues without getting hostile or violent," said Sowulewska. "It's a skill that I've learned to use on a daily basis."

Through a state program that covers the costs of college level courses to be taught at Vermont high schools, Rabbi Cohen is able to offer the conflict resolution course he teaches at Bennington College to Burr and Burton students. Upon completion of the course students will receive college credit and a transcript from Bennington College.

"I teach a number of conflict resolution courses, and a lot of the work that I do at Arava translates well into what I teach," said Cohen. "In my classes I teach students about the dual narrative within the Arab-Israeli conflict, which is a very important subject."

This past week, Sowulewska spoke to the high school students in Rabbi Cohen's class about her experience at the Arava Institute.

"Learning to speak diplomatically is such a valuable life lesson," said Sowulewska. "It's so important for high school students to learn that they can have heated debates, but still appreciate those that disagree with them as individuals."

For educators like Cohen, the public benefit of programs like the Arava Institute can not be understated.

"The Arava Institute gives students a much broader perspective on the world, which is particularly important considering issues like climate change and peace building, which are so vital to our future," said Cohen. "Arava becomes a place where you can not only study and live within these values, but also bring those lessons home."

Those lessons become particularly vital during such tumultuous moments in our history.