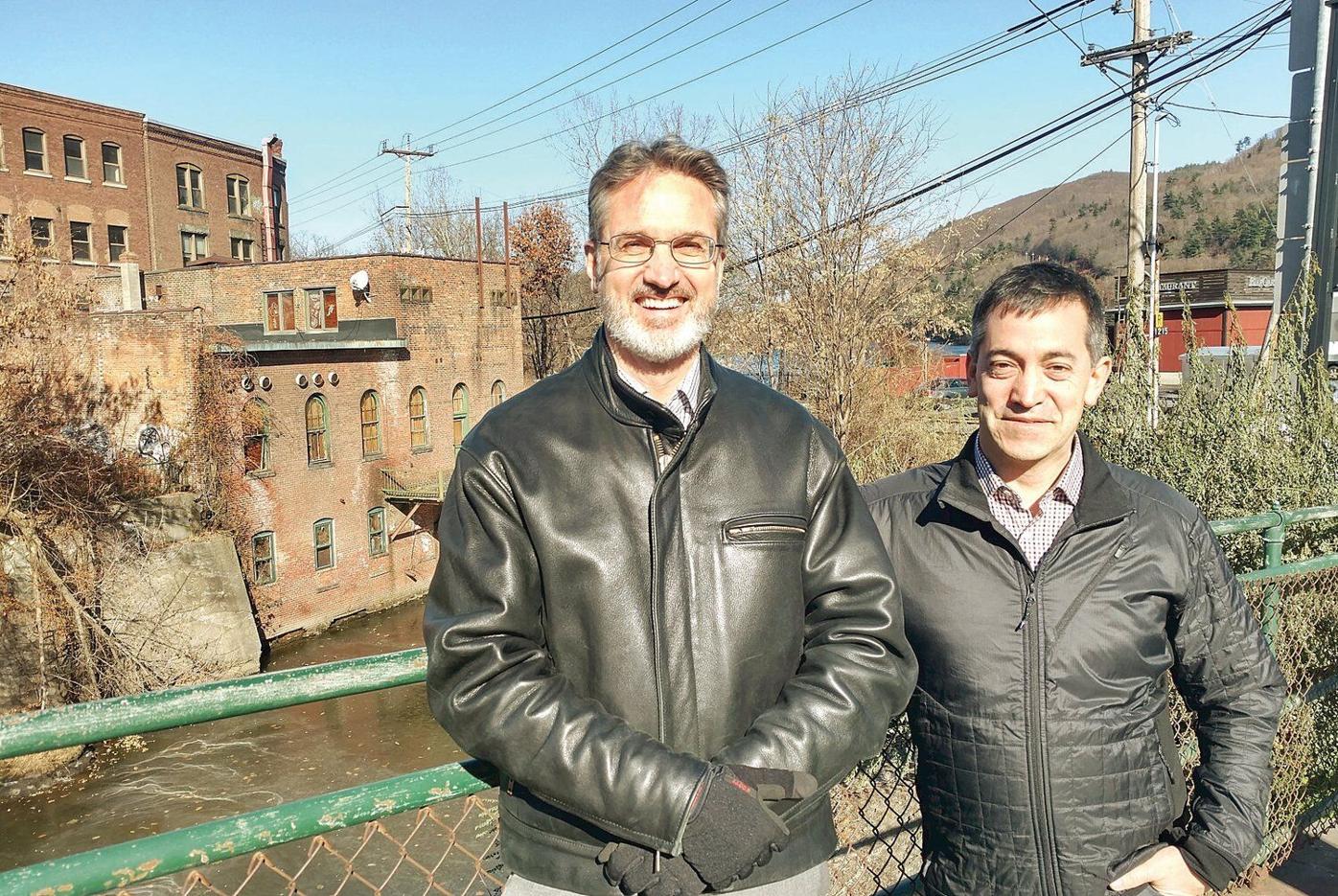 Bob Stevens, of Stevens and Associates, and Danny Lichtenfeld, the director of the Brattleboro Museum and Art Center, stand above the Whetstone Brook at Bridge Street. The pair hope to bring new housing and gallery space to the downtown area. 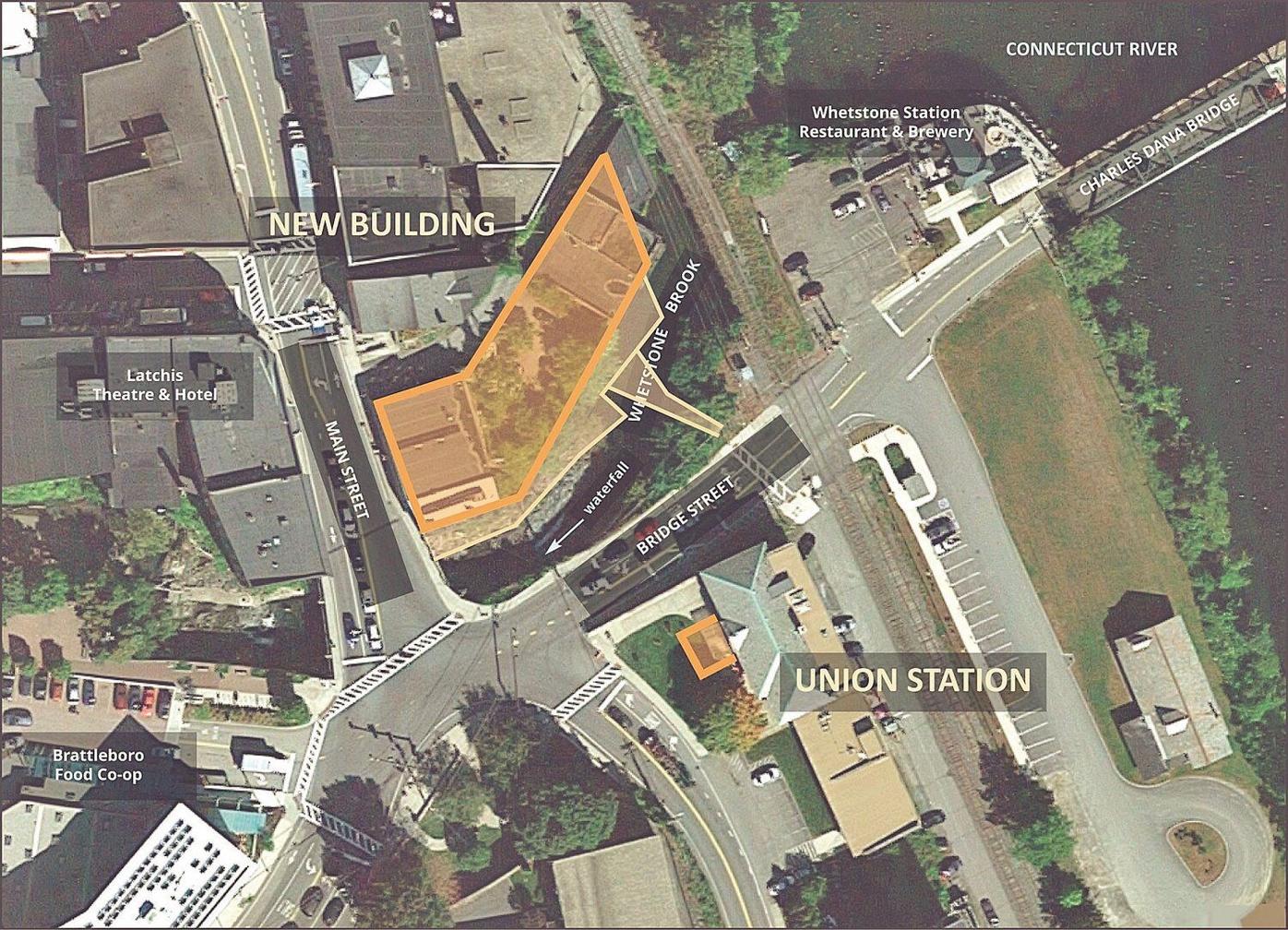 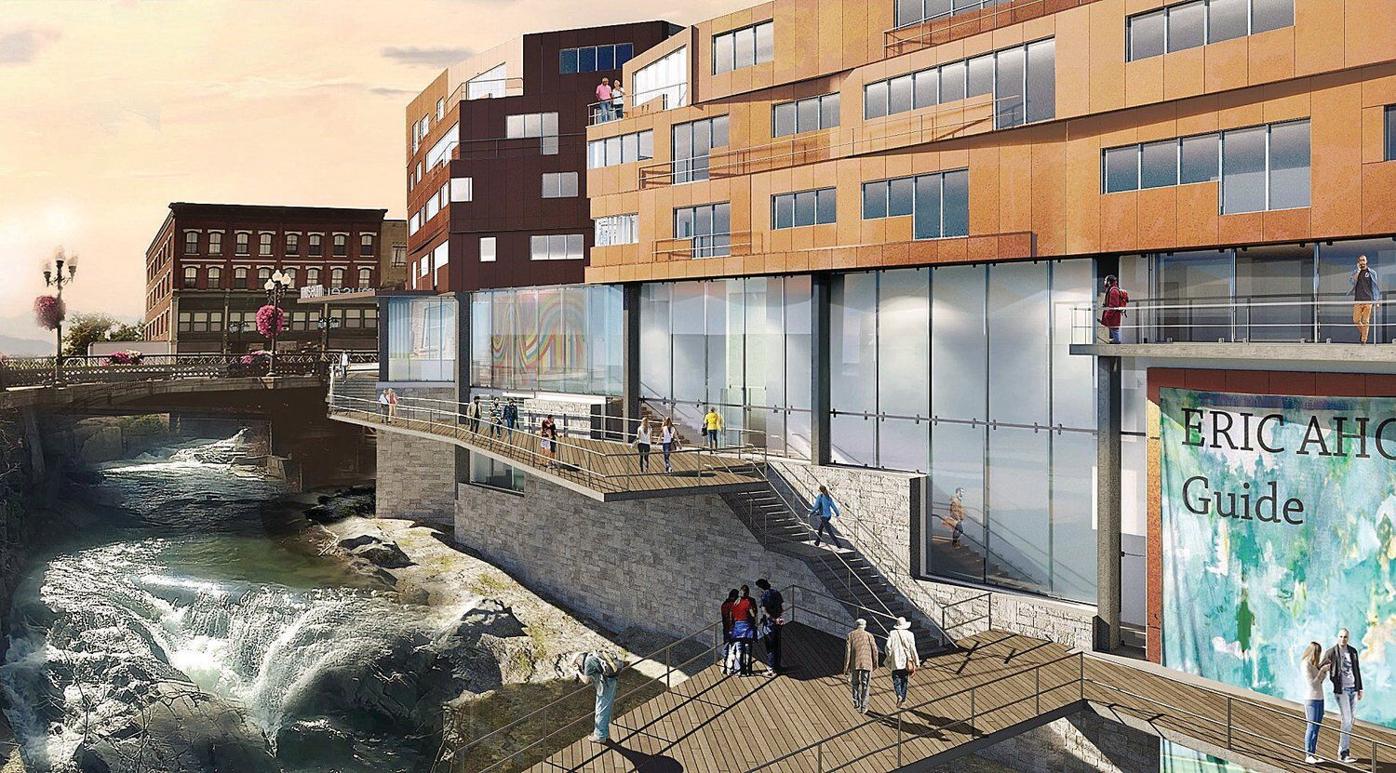 Bob Stevens, of Stevens and Associates, and Danny Lichtenfeld, the director of the Brattleboro Museum and Art Center, stand above the Whetstone Brook at Bridge Street. The pair hope to bring new housing and gallery space to the downtown area.

"We have a saying that retail doesn't work in downtowns," he said. "If you want retail, if you want an attractive downtown, you need to bring people down here for other reasons."

Stevens said a project he and Danny Lichtenfeld, the director of the Brattleboro Museum and Art Center, have been working on since 2013 does just that.

On Tuesday, Stevens and Lichtenfeld announced a partnership that is aimed at revitalizing a corner of downtown. The $30 million project calls for the demolition of the Barrows Block and the Arch Street building, replacing it with state-of-the-art gallery space and affordable housing and market-rate apartments and condo units.

"This will have an economic ripple effect through the rest of downtown," said Stevens before the press conference. "And as the downtown economy goes, the rest of the economy goes."

The centerpiece of the project is a new 55,000-square-foot building to be constructed at the foot of Main Street, alongside a cascading waterfall in the Whetstone Brook. The building will contain gallery space and classrooms, 24 apartments overlooking the Connecticut River, a cafe with outdoor seating, a rooftop sculpture garden, terraces, a footbridge, and a kayak launch.

The project was designed by Schwartz/Silver Architects of Boston, in collaboration with Stevens & Associates.

"The architects' brief was to design a bold, 21st-century building that offers a robust welcome to Brattleboro, while at the same time harmonizing with the town's historic streetscape," stated BMAC Building Committee chairman Jim Meltzer in a press release announcing the partnership. "It was also very important to us that the new building be open and inviting, with art visible from the sidewalk and across the street, even when the museum is closed. We know that art museums can be intimidating places, and we want BMAC to be as transparent and welcoming as possible."

"We love our historic home in Union Station," stated BMAC Chief Curator Mara Williams in the press release, "but it was designed to accommodate early 20th-century train passengers, not 21st-century art and museum-goers. Our new galleries will enable us to bring cutting-edge, immersive, interactive art exhibits to Brattleboro on a regular basis, as well as exhibits that require special technology or climate control."

Prior to the press conference, Lichtenfeld said that having new, climate-controlled space will allow BMAC to borrow art from other institutions that in the past have declined to loan art for display in "a 100-year-old train station," he said.

The current space at the corner of Vernon Street and Bridge Street will host a rotating selection of the art work of Wolf Kahn and Emily Mason, said Lichtenfeld before the press conference. "We have made an arrangement with them and their families to borrow art from their archives on an ongoing basis."

Lichtenfeld believes when the project is complete, it will more than double annual attendance at BMAC, from 16,000 to 35,000.

"People who travel to Brattleboro to visit the new BMAC will eat in local restaurants, stay in nearby hotels, visit Brattleboro's amazing galleries and breweries, and shop in its stores," stated Stephanie Bonin, executive director of the Downtown Brattleboro Association, in the press release. "Their dollars will in turn translate into increased spending capacity for local residents and workers and, ultimately, more jobs."

To make the $30 million project a reality, BMAC needs to raise $12 million for the new gallery space and another $3 million for its endowment. So far, said Lichtenfeld, it's raised $2.5 million. The housing ownership group led by M&S will need to secure another $10 to $12 million in equity and financing. The remaining $6 to $8 million will be secured through federal and state tax credits and grants.

M&S Development was formed in Brattleboro in 2014 by Stevens and local attorney Craig Miskovitch following the rehabilitation of the Brooks House, which was gutted by fire in the spring of 2011. A group of five local investors, including Stevens and Miskovich, formed Mesabi, which leveraged historic and new markets tax credits, conventional financing, a community development block grant, town funding, individual investors and owner equity to finance the $23.6 million project.

The BMAC project is currently in the fundraising stage, said Lichtenfeld. "But we have enough in the way of funding commitments and confidence in fundraising that we hope, by next summer, to be in final design and seeking permits."

Stevens said because the project is under 10 acres and is in the downtown, it doesn't have to go through Act 250, the state's environmental review process. However, he noted, it will have to pass muster before the Brattleboro Development Review Board, which has final say on the site plan. The state will also be keeping an eye on demolition and construction to insure it doesn't affect the Whetstone Brook, he added.

Stevens said the Arch Street building, which was built in the mid-1800s and has been mostly utilized for some sort of power generation, is considered a historic structure.

"But it's condition is such that it meets the criteria for saying it's not fiscally viable for repurposing," he said. "The building is basically a shell. It's under water and it's got some structural and environmental issues."

BMAC purchased the Barrows Block for $474,000 and the Arch Street building, from Green Mountain Power, for $1.

Prior to buying the Arch Street building, BMAC conducted an environmental assessment that determined there were no issues standing in the way of demolishing it and erecting a new building on the site. In mid-2017, BMAC received a $200,000 brownfields grant from the Environmental Protection Agency to assist in cleanup. That grant is being saved up for when the project gets rolling, said Lichtenfeld.

Part of the project calls for the removal of the retaining wall at the southeast corner of Bridge Street and Vernon Street. The project also calls for a new entryway to the current museum, with new grading to make the front door handicap accessible. The town owns the building that currently houses BMAC and rents it to the museum for $1 a year through 2042. In return, BMAC has made several expensive upgrades to the building at its own cost. Under the museum, Amtrak rents space from the town for its train station.

While the new gallery space will be exempt from property taxes, said Lichtenfeld, any space that is used for commercial purposes, such as a gift shop or restaurant, will be taxed, as will the housing units.

Some of the affordable housing might specifically be targeted at artists and their needs, said Stevens.

M&S and BMAC will form an umbrella corporation to oversee the project for seven to 10 years, depending on the requirements dictated by the differing funding mechanisms. Once those requirements expire, said Stevens, BMAC will own the gallery space and M&S will own the housing.

"We might end up selling some of those at that time," he said. "We think there will be a market for those units and for rentals that are affordable."

Lichtenfeld said he spoke with folks at the Windham Windsor Housing Trust before deciding to partner with M&S Development. He learned downtown Brattleboro already has several affordable housing buildings, including units above the Brattleboro Food Co-op and in the Wilder Block, with a new structure, the Snow Block, opening soon.

What made more sense, Lichtenfeld said, was to work with M&S to offer a variety of housing options.

THE QUESTION OF PARKING

No tenant parking is required by the town for the new housing, said Stevens.

"Our residual capacity for parking is sufficient," said Stevens. "We would like it to be closer to the site, but we have plenty of parking in the [Brattleboro Transportation Center] at this moment."

Stevens said the town has room for more parking structures, and one such spot that has been studied in the past is the parking lot at 28 Vernon Street, formerly known as the Marlboro College Graduate Center.

Renaud Brothers of Vernon now owns that building and parking lot. Mike Renaud told the Reformer he would be open to the idea of a parking structure at that location, especially if it has direct access to the yet-to-be-constructed Brattleboro-to-Hinsdale bridge that is expected to carry traffic across the Connecticut River starting in late 2022 or early 2023.

The new bridge is also a selling point for the new gallery space and apartments, said Stevens, because it means the closure of the current Charles Dana and Anna Hunt Marsh bridges, which would be converted for pedestrian use only.

Stevens said in a best-case scenario, the groundbreaking would occur sometime in 2021 with a ribbon cutting in late 2022.